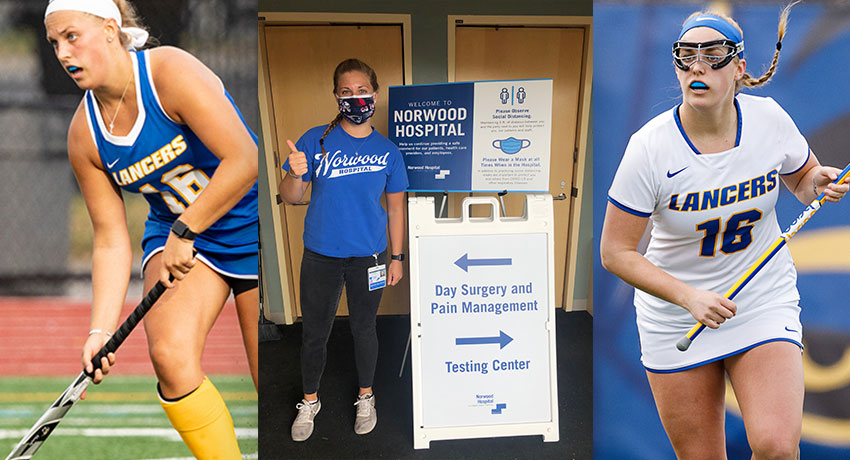 As a member of both the field hockey and women’s lacrosse teams, junior Coley Hayes is used to having a busy schedule. Her offseason, from the end of field hockey in early November to the beginning of women’s lacrosse preseason in mid-January, is barely two and a half months long, nearly half of which is spent at home for winter break.

So, when Hayes unexpectedly got the spring off after her lacrosse season was cancelled after five games, she decided she would just keep busy. Instead of spending her spring vying for her second conference championship of the academic year, Hayes, a native of Norwood, Mass., is working as a registrar in the Department of Patient Access at Norwood Hospital.

Hayes’s job responsibilities have been altered since the beginning of the pandemic. Previously, Hayes worked in the emergency room, registering patients as they came into the facility. Now, however, she is also responsible for registering patients in the COVID-19 testing center. Prior to the pandemic, she was only working at the hospital when she was home from school, and would work approximately 16 hours per week. Her workload has since doubled, as she now works between 32 and 40 hours each week.

The hospital has seen a significant ebb and flow since the beginning of the pandemic. Overall, the number of patients Hayes has needed to register in the emergency room has seen a sharp decrease, although the number has picked up in recent weeks as the hospital began to open more widely. Norwood Hospital requires all patients be tested for coronavirus before coming in for their procedures to ensure the safety of the doctors and the rest of the staff, says Hayes.

A dual-sport athlete, Hayes has an abundance of experience not only with working as a team, but two different teams with unique sets of teammates. “Working in a hospital with coworkers and people of different departments is similar to being on a team,” she says. “You need to find what works and what doesn’t, just like (in sports) when you need to find out who fits well in certain positions and who works well with whom.”

Hayes is majoring in criminal justice at Worcester State, but is working at the hospital to keep all career paths open after graduation.

“Although this job does not have any relation to my major, I’m working at Norwood Hospital to have some experience in the real world and to explore my options,” she says. Hayes works per diem, allowing her to pick her shifts and gain as much or as little experience as she pleases.

While most people would think working in a hospital during a global pandemic would be mentally and emotionally draining, Hayes has kept a very cool head about the situation because of the larger implications of the pandemic.

“It hasn’t been too stressful because you have to look at the big picture of helping people,” she says. “Some of the things that have helped me get through these times are exercising, walking my dog, and babysitting.”

Losing nearly three-quarters of her lacrosse season and going to work at a hospital is something Hayes won’t soon forget, but she has also taken a step back to learn from it.

“This experience is something I will remember for the rest of my life,” she says. “It has taught me to never take anything for granted, to live life to the fullest because you never know what tomorrow will bring, and to be grateful for what you have.”

As the country begins to open back up, Hayes says it is important to be cautious as we adjust to our new livelihoods. “Stay safe and think of others when you’re going out. You’re not only affecting yourself but the people you come in contact with.”

“Coley is a textbook example of a leader,” says Women’s Lacrosse Coach Kelly Downs. “She does whatever it takes to make our team better, and is respected by every single one of her teammates and coaches. She always puts others first, and never seeks recognition or praise for her actions or accomplishments, although they never go unnoticed. She is an incredible asset to Worcester State University and we are so lucky to have her on our team.”

“Coley is a student-athlete who most coaches can only ever dream of coaching,” says Field Hockey Coach Alexa Carlson. “She is truly the glue that holds the entire team together, and our (Little East Conference) championship would not have been possible last season without her. I speak for the entire Worcester State field hockey program when I say that we are all so proud of Coley for continuing her unmatched service to others during this pandemic.” 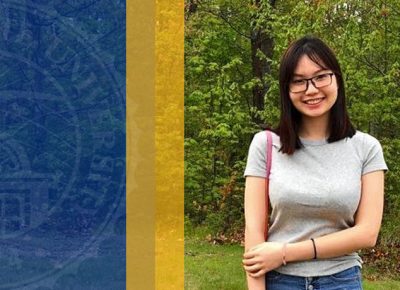 Amelia Nguyen ’20 Puts Science Into Action as a Lab Assistant at Medica Corp.

Uyen “Amelia” Nguyen ’20, an international student from Vietnam, has happily given in to the lure of science. “Science can be very mysterious,” Nguyen, says. “The more I get into it, . . .