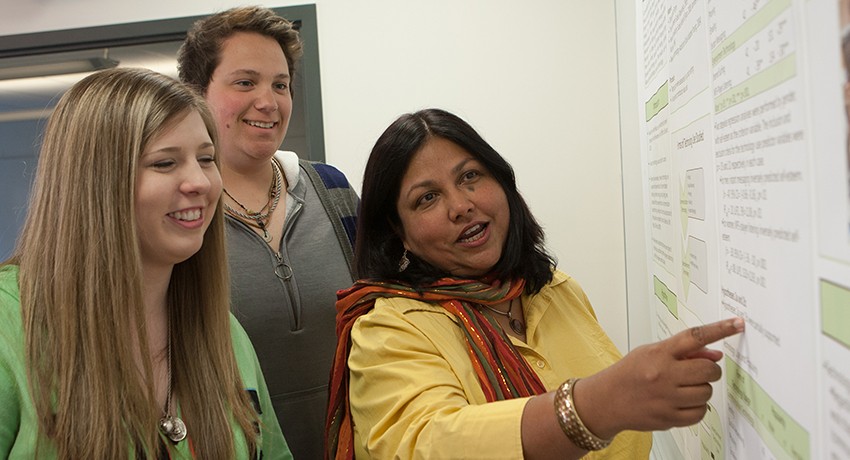 Champika K. Soysa (Psychology) calls what she does “action research.” It’s hard to know which is more powerful, the action or the research.

“I believe that the people I study are not just a data source,” she said. “I also try to do something for them.”

She thus did four months of psychosocial training with people in her home country of Sri Lanka after the December 2004 tsunami. After that, she began collecting data. Trauma among women and children is her research focus.

Soysa returned to Sri Lanka the following year to look at the long-term impact of trauma on children. She is from the west and her work in Weligama in the south helped her establish relationships and access to children that the research required.

“In the south, children have recovered from the tsunami trauma for the most part,” she said. “There was a shared sense of stress. It’s seen as a normal reaction to an abnormal situation, the tsunami.”

It’s not psychopathology, she continued. “That’s why most people in the community were able to get back to their normal lives.”

The north, however, presented an access problem. That’s the region where the minority Tamil paramilitaries wage their civil war against the rest of the country.  Children in the north experienced not only the effects of the tsunami but also persistent civil war.

Researchers need to be culturally adept, Soysa said, especially when dealing with a complex subject like trauma. She doesn’t speak Tamil, and although she traveled to the war zone in early 2005 to conduct psychosocial training sessions, she herself couldn’t do the same level of research she’d done with children in the south.

With a small grant from the American Institute for Sri Lankan Studies, she recruited a mid-career Tamil medical doctor who lives in the north. She then trained him in psychology research skills.

“He was already trained in counseling by an NGO in Jaffna,” she said. Jaffna is in the heart of the war zone in the north.

She has never met her research collaborator, Dr. C.S. Jamunananthan. “We’ve done the training through e-mail and the telephone,” she said.

Jamunananthan did, however, collect data on children in the north about their stress reactions.  “The biggest problem for them is the continuous exposure to war,” Soysa said. “The cumulative effect of exposure to war, the tsunami, and war again, is very high levels of stress among these children.”

Their parents worry about the disruption to their education. There is minimal access to health care in the region.  Nothing is usual. Or normal.

“You’re listening to children whose life experience has been some sort of extreme life-changing event,” she said.  “They may not be seen as ill. But they’re under unremitting stressors.”

Soysa’s 2007-08 mini-grant, “One year post-tsunami: PTSD in Two Ethnic Groups in Sri Lanka (Northern and Southern),” paid her expenses to San Francisco in August for the American Psychological Association conference. She presented a poster of the work she did in 2005 and shared the credit with Jamunananthan.

“People were amazed to hear of the context in which I do this work,” she said. “It is one in which there’s been a disaster, the tsunami, in the context of a 25-year-old ethnic war. Data are difficult to gather. You have to work with schools and other organizations on the ground. It’s all about relationship building.”

As for the next phase of this ongoing research, Soysa points to two distinct projects. One is to figure out what helped the children who got better. “I have the data,” she said, “but it’s neither analyzed nor interpreted.”

The other project is to carve out the time to write up what she’s done so far. “Some of the things I’ve discovered in my work aren’t in the professional literature,” she said.

Making this time to write might prove to be even harder than doing action research in a war-torn, tsunami-stricken country.

Sometimes professors see possibilities in students that they themselves don’t immediately see. More than two decades ago, Sudha Swaminathan (Earth, Environment, and Physics), then a physics . . .