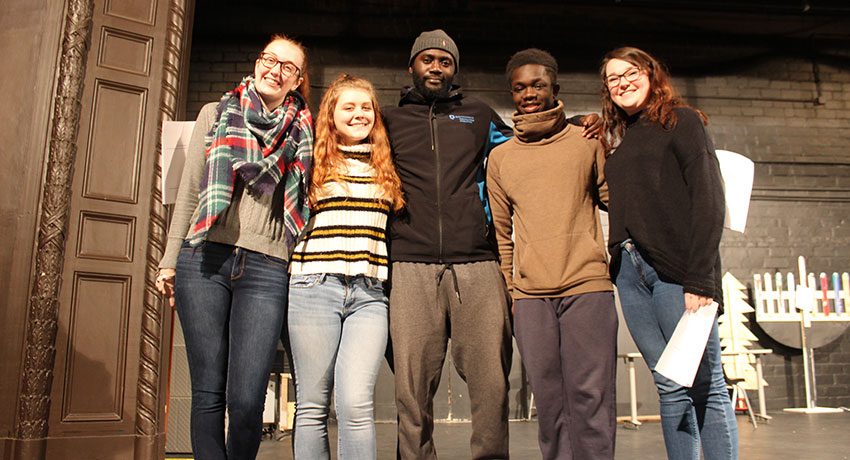 Students from a variety of majors took on historical roles in collaboration with the Worcester Chapter of the Daughters of the American Revolution (DAR) and performed them at a public event in December at The Oaks, the chapter house for the local DAR.

As a final project for a course, aptly called “Bringing History to Life,” students were asked to work together in small groups to conduct research in historical archives. Co-teachers Erika Briesacher, Ph.D., associate professor of history, and Lisa Kramer, Ph.D., visiting assistant professor the Department of Visual and Performing Arts, encouraged students to use primary sources whenever possible to find stories or people that interested them.

“Then they explored those stories in more detail, focusing on how individual people interacted in whatever the situation it was that they chose,” Kramer says. Students gained a sense of their characters through writing journals or letters from historical figures, and then worked with their groups to develop scripts that could be presented to the public. “All the scripts incorporated historical evidence, as well as extrapolations to bring the characters to life,” she says.

The result was an evening that was extraordinarily informative and entertaining, Russ Pottle, Ph.D., dean of the School of Humanities and Social Sciences, says. “The synthesis of historical research and creative presentation by our students was absolutely compelling and absolutely a clear statement of the value of the humanities in helping us understand the human experience,” he says. “Kudos to our students and to our innovative faculty members, Dr. Briesacher and Dr. Kramer.” 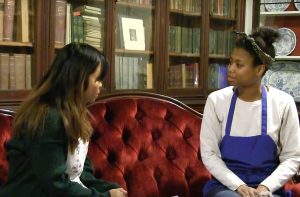 Kramer says the collaboration provided a chance for students to learn many different things, including how to develop a research topic based on archival material, how to collaborate with people with diverse skills and abilities, how to present historical information in a public setting for diverse audiences, and how to take historical evidence and write interesting stories that are based on that research.

It also gave students a new respect for disciplines outside their own, Briesacher says. “The theater students understood the task of research and the historians understood the challenges of performing and acting,” she says. “And they all gained new respect for the people who work in the field of public history, who are often volunteers who do it because they think it’s important.”

Given the performance setting was the DAR chapter house built in 1774, many students chose to portray Revolutionary-era characters, although others, like O’Connell’s group, took a more modern approach. Her group portrayed letter-writing women from the Worcester DAR during World War I, who called themselves the Betsy Ross Squad, and the American troops fighting in France with whom they corresponded. During the performance “we’re reading the letters we wrote to the troops and the ones they wrote back to us, so the scenes go back and forth between Worcester and France,” O’Connell says.

Members of the World War I letters group will continue to work on their scene as an independent study project this spring in preparation for a performance they have been asked to give at an upcoming DAR meeting.

An even more contemporary take was that of a group that chose to dramatize the Worcester Cold Storage fire of 1999, in which six city firefighters died. “We decided we wanted to do something a little bit more modern history, more current, to help the audience relate to it,” Libbey Stearns ’21, says.

Jillian Brady and Caitlyn Sullivan, both sophomores, participated in what they termed “The Ghost Group.” “That’s because we’re not really doing one particular scene. We’re going around helping people find their way to scenes and find their way around the house,” Brady says.

As they moved from room to room, Sullivan, flexible enough to take on a male role, portrayed Timothy Paine, the original owner of The Oaks, while Brady assumed the role of his wife, Sarah Chandler Paine. The Worcester DAR chapter is named after Col. Timothy Bigelow, a patriot and Revolutionary leader, but Paine was a devout Loyalist.

It wasn’t easy doing the historical research for Sarah Paine’s character, Brady said. “It took a long time to even find a reference to her name,” she says. A visit to The Oaks, where there is a plaque listing the names of former owners, provided the first clue and, from there, the story of a strong-willed woman began to unfold. 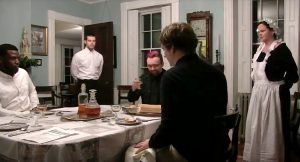 An example of Sarah’s outspoken character, untypical for the times, can be found in an anecdote Brady and Sullivan shared. One night, Sarah and Timothy invited John Adams, who had been a teacher for their children, to the house for dinner. Although the American Revolution was not yet officially underway, Adams already was an eloquent spokesman for the cause of independence.

“During dinner, Timothy made a toast ‘To the King, to God,’ and one of John Adams’ acquaintances was getting upset about it,” Sullivan says. “So, Adams was, like, ‘No, let him toast to his King. We’ll have our turn.’”

When Adams’ turn came, he stood and rebuked his loyalist host with a toast to the devil, which shocked Paine, who shared the deeply pious sentiments common in the era.

Paine was so upset that he was about to kick Adams out of the house when Sarah spoke up to smooth things over, Sullivan says. “Sarah turns to Timothy and goes, ‘No, dear, no. It’s all right. He let us toast to our king. Let him toast to his.’” 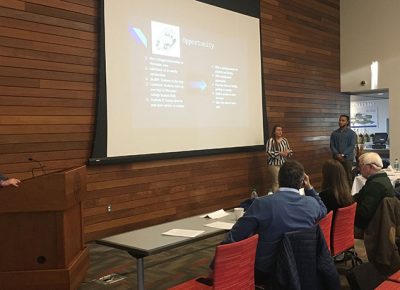 If necessity is the mother of invention, three students can thank Worcester State’s notorious parking challenges for helping them win $2,000 in an annual business proposal pitch contest. Jacklyn . . .