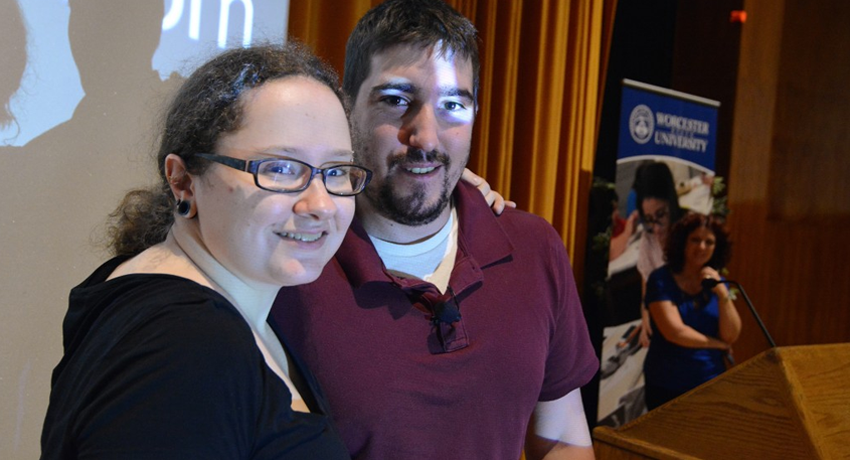 In 2013, Jeff Bauman was an average 27-year-old kid living in Chelmsford, Mass., with his mother and working at Costco Wholesale in Nashua, NH. He liked playing his guitar, drinking beer, and hanging out with his friends.

He also really liked his girlfriend Erin, who was planning to run in the Boston Marathon that year. Although he was overwhelmed by the amount of training she had to do, he remained supportive of her efforts and cheered her on from the sidelines on the day of the marathon: April 15, 2013.

“When I dropped her off in Hopkinton [at the starting line] I told her ‘You better win’,” said Bauman. “She laughed and told me to shut up.”

He never could have imagined that on that same day he would become a victim in the deadliest terrorist attack in the history of Boston.

Two and a half years later, Jeff Bauman has become internationally recognized for his incredible recovery story, which he has shared with audiences around the country. His recently published memoir, “Stronger,” is currently in development with Lions Gate Entertainment for a film adaptation starring Jake Gyllenhaal as Bauman.

Bauman visited Worcester State University recently to sign copies of “Stronger” and to talk with students and the general public about his life before, during, and after the Marathon Bombings. More than 250 people were in attendance for the event, and Bauman received a standing ovation from the audience at the end of his presentation.

He relays the impact of the bombing this way: Because he was standing so close to the first pressure cooker bomb on Boylston Street, Bauman sustained serious injuries to his lower body and lost both of his legs. Dazed, bloodied, and in shock, Bauman heard the second blast and he thought to himself, “You’re going to die here.” He lay on the pavement, ready to give up.

“But then I sat back up as people started running over and I thought, you know what? I‘m not giving up,” Bauman recalled. “I was going to try and get out of there. Then this crazy guy with a cowboy hat was shaking me and yelling, “Dude, you have to stay with it!” and another guy was trying to gather stuff for tourniquets. Everybody was helping me out.”

The “man in the cowboy hat,” Carlos Arredondo, accompanied the wheelchair-bound Bauman to an ambulance, and the two men inadvertently created the most iconic image from the Marathon Bombings.

Bauman remains in close contact with Arredondo, the man who helped to save his life. Together they threw the pitch for the opening game for Boston Red Socks’ 2013 season and reunited a year later for the 2014 Boston Marathon.

Bauman has since made full recovery from his injuries and was outfitted with prosthetic limbs, which he received after tough physical therapy training at Spaulding Rehabilitation Hospital.

“It was really tough,” said Bauman. “They’d wake you up and work you out all day, just to get you ready. They’d strap weights on me and I thought, ‘why are they strapping weights to my legs?’ I was mad. But it was all training for the prosthetics.”

Bauman, who is now married to Erin and has a 14-month old daughter, says that his is totally different (“in a good way”) from the path he was on, and that he was lucky to have his family and friends around him who wanted to see him do great things.

“I got up from a horrible incident and now I have a great life and I made the most of it,” he said. “Now I live my life to the fullest.”

“Everybody has horrible things happen to them. You just have to truck through it and stand up, get up, and use the things around you to gain confidence and strength.”

This Diversity Series lecture was sponsored by the Student Events Committee, WSU Counseling Services, and the Binienda Center for Civic Engagement.

In the wake of the recent tragic shooting at Umpqua Community College in Oregon, we wanted to remind the community of some ways police and others keep our campus as safe as possible. - Policing at . . .