Kalyan Ghosh Speaks of Impacts of Alzheimer’s Disease on Caregivers

Ghosh’s talk, titled “Living with Alzheimer’s in America,” was inspired by his recent article in AARP magazine in which he discussed the often calamitous impact of Alzheimer’s and related forms of dementia on patients and the families who care for them.

After serving as president of what was then known as Worcester State College since 1992, Ghosh retired from his position in 2002 and moved with his wife, Abha, to the Chapel Hill, N.C., area a year later.

“We had just retired and we had four beautiful grandkids and wanted to travel all over the world,” he said. “People couldn’t understand why I retired from Worcester State because they wanted me to continue there, but I still retired because there’s more to life than this job.”

Then Abha underwent a drastic personality change and began displaying other troubling symptoms. The diagnosis could hardly have been more devastating—Alzheimer’s disease. “All of a sudden we got this news and so everything came to a grinding halt,” Ghosh said. “All those plans for travel had to be ditched.”

Instead of the fulfilling retirement he had envisioned, he would now dedicate his life as a primary caregiver for Abha, who suffered from dementia for more than 12 years. Because it is still so painful for him to speak about his wife, he said he would focus more on the sociological, familial, and economic aspects of the disease than on the personal side. “I will spend the last 10 minutes of my presentation on my personal journey,” he said, “and if I cry, cry with me, but I’ll try not to.”

There are 5.5 million people with Alzheimer’s in the United States today, a number that is expected to rise significantly, he said. As the disease progresses, it places an enormous burden on a family’s emotional, physical, and financial wellbeing, Ghosh said. “This is a massive, massive problem today for America because, as it’s been called, of ‘Graying America’ or ‘Aging America,’ ” he said.

Eventually, long-term nursing home care is usually required. The average annual cost of that for Alzheimer’s patients is $80,300, according to the Alzheimer’s Association. So where does the money come from?

“Families pay a significant part of it,” Ghosh said. “Fifty percent of the caregivers cut back on their own expenses. They cannot spend the money they used to spend. Twenty-eight percent are more likely to even go hungry. It’s hard to believe, but there’s no money left to feed themselves.”

Some hopeful developments may be on the horizon, thanks in part to the National Alzheimer’s Project Act passed unanimously by Congress in 2011. It seems that the rare Congressional unity came about because Democrats and Republicans alike recognized that “we are all aging. We are getting older so we have got to do something about Alzheimer’s,” Ghosh said. The measure seeks to find an effective treatment and requires a national strategic plan to address the rapidly escalating Alzheimer’s disease crisis.

Another critical advance that advocates strive for is the development of a readily available toolkit for caregivers. “When I faced the situation, I had absolutely no clue,” Ghosh said. “I had no idea what it all meant. I had no idea who to go to, who to talk to, how to find out how to take care of my wife.”
Resources are available, but need to be developed further, and then widely publicized “so anytime a family first faces that kind of problem, they know where to go,” he said.

This talk, held in the Blue Lounge at the Student Center, was sponsored by the Center for Interdisciplinary Health Studies and Practice, the School of Education, Health and Natural Sciences, and the Women’s Studies program.

The Women’s Studies sponsorship had a particularly important tie-in to the topic. Dean of the School of Education, Health and Natural Science Linda Larrivee, Ph.D., said in her introduction for Ghosh,” “You will hear that as many as two-thirds or more of the caregivers of people with dementia are women. So although this may affect everybody in this room at some level, either as a caregiver or as somebody whose loved one is going through this, it really does hit women in a very special way.”

WSU President Barry Maloney, in his opening remarks, shared that he had lost his father to Alzheimer’s just last August. Ghosh’s presentation would be extremely helpful and informative whether the issue is Alzheimer’s or some other medical calamity that a family goes through, he said. “It will help us form some thoughts (about it) as we make our way through life so I would like to thank him for sharing all his wisdom.” 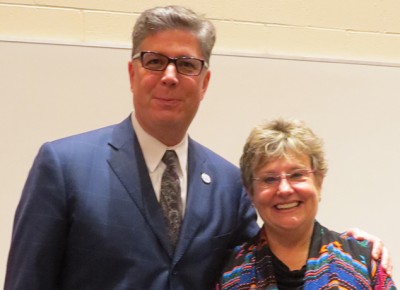