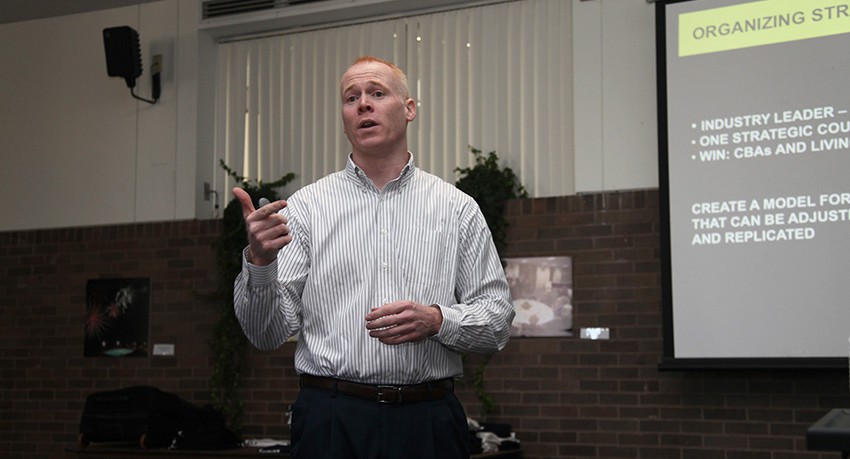 Keady Gives Audience a Glimpse of What’s ‘Behind the Swoosh’

Jim Keady of Educating for Justice told a crowd of students, faculty and staff about Nike labor practices in Indonesia as part of the Diversity Lecture Series last Wednesday.

During his talk, titled “Behind the Swoosh: Sweatshops and Social Justice,” Keady detailed the month he spent in an Indonesian factory workers’ slum living on $1.25 a day, a typical wage paid to Nike’s subcontracted workers.

According to Keady, Nike has $19 billion in revenue and $1.9 billion in profits. He also stated that Nike employs over one million workers in over 1,000 factories in 52 countries.

“These workers produce the real wealth for Nike,” said Keady. “Success cannot be about purely profit.”

In addition to the low wages, Keady noted that Nike — and many other manufacturers — dump and burn waste rubber from the soles of shoes. He showed video of heaps of burning rubber in Indonesian dump sites near where children were playing.

“Our video crew would wait outside the factory and follow the dump trucks and this is what we found,” Keady said.

He stressed that Nike is not alone in corporate exploitation of workers, nor are Indonesian workers the only exploited workers. “But Nike is the largest. If we can make a case and change the way Nike does business, then we will build from there.”

More than 250 attended the 20th Annual Student Government Association (SGA) Auction to Benefit Homeless and Children in Need last Friday. The auction alone raised over $24,000. Prior to the . . .