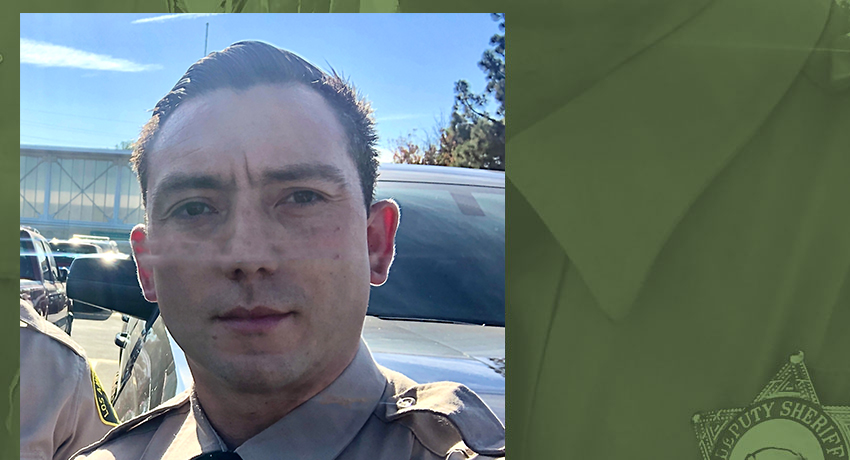 L.A. Sheriff Deputy Andrew Garcia ’13 Sees the Best and Worst in People in the Age of COVID-19

Andrew Garcia ’13 has endured many stressful experiences in his six years as a deputy sheriff in Los Angeles County—shootings, robberies, high speed chases—but nothing compares what he is going through these days. The criminal justice and Spanish double major says he sees the best and the worst in people as he and his colleagues try to enforce the law while staying healthy and safe in the age of COVID-19.

“This is our job and you can’t give up. You do what it takes no matter what,” he says.

The more than 9,000 members of the Los Angeles County Sheriff’s Department patrol areas outside the boundaries of L.A. and other cities, as well as operating the county’s jail system, and acting as bailiffs and providing courtroom security at county courthouses. Garcia has been on patrol for the past four years, after working for the mandatory two years in the county prison system shortly after graduation.

He says one of most consequential actions affecting the ability to do his job was when more than 6,000 inmates were let out of jail early to mitigate widespread virus exposure in crowded conditions. The normal mechanisms in place to give former prisoners the skills necessary to succeed in society were dismantled when support workers were told to stay at home.

“I understand why they wanted to let them out early. But not having support systems in place has caused a whole bunch of problems,” he says. “They are being discharged without a place to live, without a job, without food, so now they are homeless and hungry. They’ve been in the system for a long time, and they need to be reacquainted with society. You put them on the street without this support and they revert back to what they know.”

As a result, while violent crimes may be down, robberies have gone up, and he sees fear and desperation in the eyes of those who are trying to survive in the darkest of situations.

The law must be enforced or society will collapse, he says, but with the court system working with a skeleton crew, often only having preliminary hearings, “we’re not holding people accountable. I’m here for the people I serve, just like firefighters and medical professionals. But we want to go home to our families too.”

On the positive side, he’s also seeing the good in people, and he’s particularly taken with the bond growing among many essential workers—not just first responders—as they endure similar challenges. Many are feeling a better appreciation for truck drivers, gas station workers, grocery store clerks, and fast food restaurant workers.

“There’s a real camaraderie forming because we’re all facing similar stresses in trying to do our jobs and staying healthy. No one looks down on these professions because they are all important,” he says.

His daily routine changed dramatically once the stay-at-home orders were announced, which he describes as hitting a brick wall after going 90 miles per hour. Now as he and his colleagues respond to service calls, there’s an apprehension of what they are going to encounter, especially when it might be a medical call. “You’re still going to go in, no matter what. That’s how most of us think,” he says.

They are also seeing the frustration coming from those who see the quarantine directives as a violation of their basic freedoms.

“Unfortunately, there are areas that don’t care about social distancing and they are gathering for street parties. There’s no law prohibiting it—stay at home is just a guidance—so we use other ways,” such as citing jaywalking laws, to get them to disperse, he says. “They don’t get mad at us. They’re mad at a government that is keeping them locked down. We really relate to them individually and for the most part they are listening. We try to keep it cool. We can talk to them and they listen to us.”

A strange side effect of the lockdown are empty L.A. freeways. He is actually seeing more high-speed pursuits because, while those fleeing may have open roads, law enforcement officers don’t have to break off a chase for fear of endangering the public.

A native of California, Garcia came to Worcester State to run track and be near his high school sweetheart, who was going to school in Massachusetts. He describes it as the “best decision,” and he still keeps in contact with many former classmates who are in also in law enforcement, as well as Prof. Steve Morreale, Ph.D., chair of the Department of Criminal Justice, and Matthew Swett, now head coach of the men’s track and field team.

Being on the track team showed him, “No matter where you go, you’re going to meet people you can relate to.” In addition, he sees parallels with success on the track and field and success in his profession.

“In track, you have your individual events, but you need everyone to do their part for the team to win,” he says. In real life, trusting in your partner and other colleagues is essential for everyone to do their job well. “It’s not always about you. Sometimes another person is the best person to do the job, and your role is to do everything you can do to help. When I was younger, I thought I could do it all, but now I realize there might be someone better suited to do that job.”

He comes from a law enforcement family, which also helps him cope in this stressful time. His uncle served in the L.A. County Sheriff’s Department for 28 years, while his aunt was a member of a small police agency for almost 13 years. He also has six cousins in law enforcement. 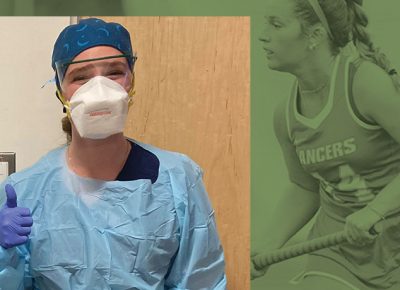 Normally at this time of year, nursing major Sarah Duff ’21 would be in the middle of her field hockey team’s non-traditional spring practice schedule, perhaps running sprints on Coughlin Field, . . .