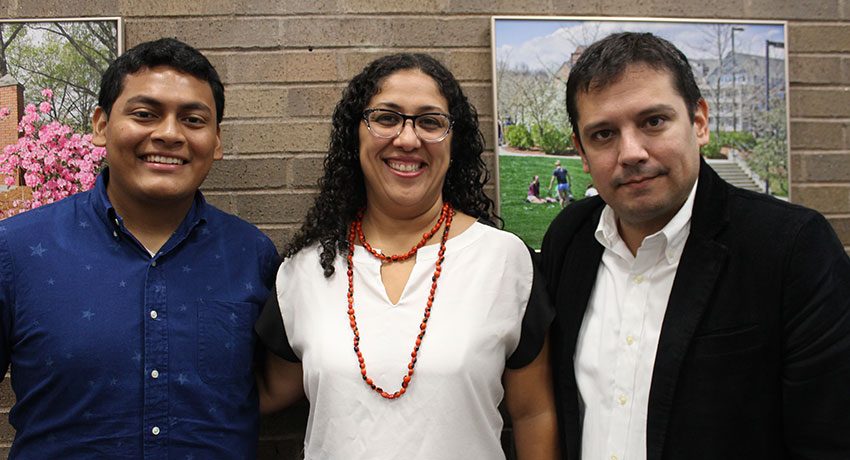 Pedro Medina León, leader of the new Latino Boom literary movement, gave a talk to a standing-room-only crowd in the Blue Lounge on Thursday, Oct. 11, the first in a series of events throughout October that will celebrate Latin Heritage Month. The events will showcase Latin culture through lectures, a film screening, and a fundraiser to benefit the people of Puerto Rico, many of whom are still struggling with the after effects of Hurricane Maria.

Léon, an award-winning author and editor, spoke about the ever-shifting culture of his adopted hometown of Miami, the importance of building community among Spanish speakers from all different countries, and the strong desire they have to read books and articles in their native language.

A native of Peru, Léon is the author of several novels including the acclaimed Varsovia, which won the Florida Book Award in 2017.  He also is the editor of anthologies of Spanish language writers, including Viaje One Way and Miami (Un)Plugged.

Viaje One Way reflects the lives of many writers who, like Léon, came to the United States not necessarily intending for it to be a one-way trip from their native countries. When Léon moved to Miami in 2002, he wasn’t sure what—or where—his future would be. He also found himself in a challenging situation as a writer. It was hard to find publication opportunities for Spanish-language authors, and the few that existed were mainly for the long-established Cuban community. Since that time, Léon said, the culture in Miami has shifted to be more inclusive for other Spanish-speaking nationalities as the Latin Boom movement spawned a new interest in the publishing of Spanish-language authors.

Léon is one of the founders of that movement, having built a sense of community among writers through various means, especially as the creator of Suburbano Ediciones, a digital magazine which has become the leading Spanish-language cultural network portal in the United States.

He also created new cultural opportunities for Spanish speakers in Miami. He said there were virtually none when he first arrived in the city, so he saw a need to fill that void. One recent event was Cuentamania, a storytelling festival that attracted a large audience. “So many people showed up that they had to bring in more chairs,” he said. “It was so important for them to hear stories in Spanish, in their language. There’s such a need for that.”

Latin Heritage Month events continue on Monday, Oct 15, when the film “Black Out in Puerto Rico” will be screened at 5:30 p.m. in the North Auditorium. The film is about an investigation by “Frontline” and NPR into the economic crisis in Puerto Rico after Hurricane Maria, examining how the federal response, Wall Street, and years of neglect have left the island struggling to survive. The event is free and open to the public. Snacks will be available.

Esmeralda Santiago will speak on Thursday, Oct. 18, at 11:30 a.m. in the May Street Building auditorium. Her topic will be “When I was Puerto Rican.” Santiago was born in Puerto Rico and came to the mainland when she was 13 years old. She is the author of three memoirs, two novels, a children’s book, and has co-edited two anthologies of Latino literature. A graduate of Harvard University with a master’s of fine arts degree in fiction writing from Sarah Lawrence College, her essays and opinion pieces have been widely published. She is a frequent commentator on NPR’s “All Things Considered,” “Morning Edition,” “Latino USA,” and “The Takeaway,” a national morning radio news program.

An “Evening for Puerto Rico” will be held at 5:30 p.m. on Wednesday, Oct. 31, in the Blue Lounge and the exhibit area in the Student Center. It will include a poster exhibition and panel discussion about Hurricane Maria’s impact on Puerto Rico.

Latin Heritage Month is a collaborative effort by several Worcester State offices and departments including the Third World Alliance, the Office of Multicultural Affairs, and the Office of Diversity, Inclusion, Affirmative Action and Equal Opportunity. 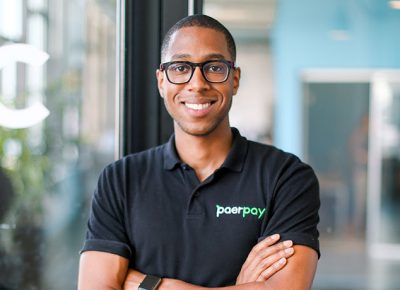 Entrepreneur Derek Canton ’15 challenged incoming first-year and transfer students to find their passion and “be crazy enough to think you can change the world,” during the keynote address at the 2018 Convocation ceremony on Tuesday, Sept. 4. Canton, who was recently named to the Worcester Business Journal’s 40 Under 40 list of business leaders, is CEO and founder of paerpay, a mobile . . .