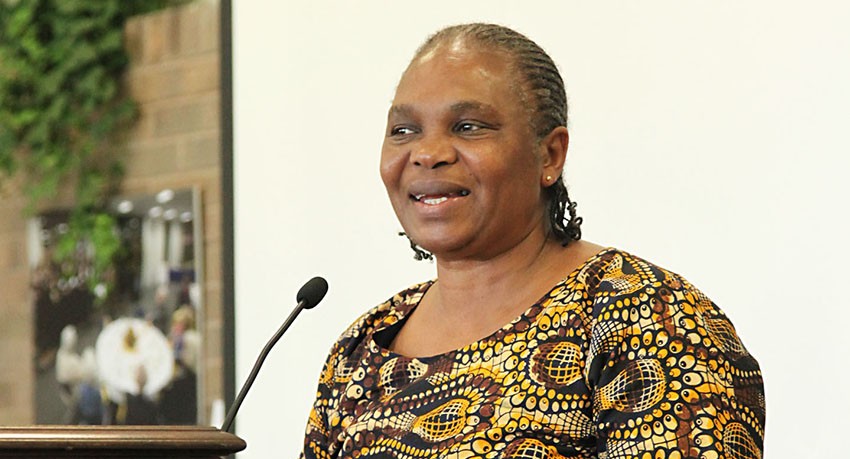 Kaara, a globally renowned Kenyan educator and social justice activist, spoke about the crushing impact of debt on her homeland. She is working to gain support for the Jubilee Act, legislation filed in the U.S. House of Representatives on December 16, 2009, that would extend debt cancellation to 22 impoverished nations.

“Debt traps us,” she said. “We service the debt at the expense of education, health care and food. Dictators used the money to buy guns, or they stole it and put it away in banks in Switzerland.”

She maintains it is unfair for the people of Kenya today to suffer for debt they did not benefit from. She reported that for every $1 Kenya receives in aid, it pays $3 to pay the interest on the debt.

Kaara, who plans to run for president of Kenya in 2012, called on those in the audience to fill out paper slips with their thoughts on debt and pledged to deliver them to the G20 in Toronto this June.

Following her talk, Kaara joined the college community in honoring the life of noted South African poet and human rights activist Dennis Brutus, who passed away December 26, 2009. Brutus, who was imprisoned in South Africa in the 1960s for his anti-apartheid activities, developed a close relationship with the college when it became a strong supporter of his bid for political asylum in the United States.

“It is not a coincidence that I should be here to memorialize Dennis Brutus,” Karra said.

The two worked together as activists and voices for social justice.  Another great friend of Brutus’ Merrill Goldwyn, co-founder or the Center for the Study of Human Rights recalled Dennis as a survivor with great sensitivity.

“He loved Worcester State College,” she said. “He made many appearances here and was in residency her twice.”

Goldwyn, who attended the event despite undergoing recent surgery, said that among the college community, “Dennis was universally admired.”

“Worcester State College is incredibly honored to call Dennis Brutus and Merrill Goldwyn among our dearest friends and we view their work and legacy among our greatest treasures,” said WSC President Janelle Ashley said

The events were sponsored by the Intergenerational Urban Institute, the Center for the Study of Human Rights, the President’s Office, the Student Senate, the Third World Alliance, Amnesty International, and the Department of Urban Studies.

Author Discusses Experience With The Lost Boys of Sudan

Joan Hecht, the founder and president of Alliance for the Lost Boys of Sudan and author of the award-winning book The Journey of the Lost Boys, and Atem Da’Hajhock told the harrowing story of the . . .