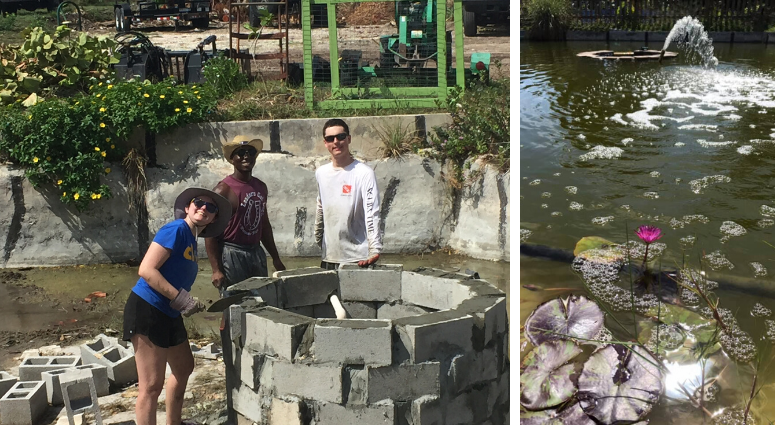 Like a Purple Messenger From a Brighter Time, a Pond Grows in the Florida Keys

Members of a student group opened their social media posts on Tuesday, May 5, to find that the well they built in 2019 had created a bubbling pond and a vibrant purple lotus flower was blooming atop a lily pad. The caption of the Facebook photo was, “Good Morning.”

The photo of the flower was posted by Grimal Grove, an eco-friendly educational park, where a team of students has taken a service spring break trip for the past three years, working with a nonprofit called The Growing Hope Initiative. While this year’s spring break service trip to the Florida Keys was cancelled, the picture of the flower and the pond had Jessica Marie Lloyd ’19, Omolara Ojo ’19, Sophia Palmacci ’20, Lucas Stevens ’19, and Madison Thomas ’18, all commenting on the post.

Building a well is not something anyone had ever done before, and to see the fruits of their labor produce a purple flower was a delight.

“I went on the Grimal Grove trip for spring break two years in a row,” says Lloyd. “My second year, I was set to the task of helping clear out a concrete pit and build a well to turn it into a pond. Never in my life did I ever think I would work with cement, nor did I think I would enjoy it as much as I did. I continued to grow connections with people that had started the previous year and began to form new ones. A year later now, since the completion of the well, I was amazed to see the picture of what started as a cement pit and cinder blocks is now thriving as a pond with lily pads. Just as the well remains, so do the connections that were made with the amazing people at the grove.”

Omalara Ojo posted a GIF of Will Smith singing out, “I’m so proud.”

Grimal Grove on Big Pine Key originally belonged to Adolf Grimal, who in the 1970s and 1980s had a vision of creating a park that included tropical fruits. He also created a series of reservoirs to capture fresh water for the plants at the grove, and the well that WSU students built is now filling one of those once-neglected reservoirs with water.

Patrick Garvey, a principal in Growing Hope, says, “Grimal died in 1997 and it all fell into disrepair. [The effort to return] the tropical fruit grove to its previous natural beauty is in its fifth year.” Garvey relies on volunteers to get much of the work done. His nonprofit has partnered with WSU to create a week of hard work and satisfying friendships.

While current students were disappointed in the cancellation of this year’s trip, seeing the flower on a lily pad in the pond their work created was a welcome sight for a few new alumni.

Stevens, who carried many a bucket of mud for the well head construction reports, “It was definitely rewarding to look back and see our hard work and to see it pay off. “

Lucas was a member of the team for two years. “I was constantly involved in projects that are now long-term improvements to the property. After the devastation brought to the Keys by Hurricane Irma, I am so happy to see that the Grove continues to rebuild and be an integral part of the Big Pine Key community,” he says.

This year’s trip was also going to include lab work as part of a biology course Tropical and Marine Biology, being taught by Professor and Chair Steven Oliver, Ph.D., Professor Ellen Fynan, Ph.D., and Assistant Professor Aleel Grennan, Ph.D., all of the Biology Department. Students were to stay at the Elizabeth Moore Center for Coral Restoration and Research on Summerland Key, and the crew was going to work in labs on both coral restoration and a field lab with Grimal Grove.

For Thomas, who attended all three years of the trip, “We didn’t wake up dreading that 7:30 a.m. wake-up call to go to the grove,” she says. “We would wake up excited to go. It was hard work, but it was extremely rewarding, especially being able to see the progress because it’s still in those stages where it’s not completely finished. So you get to see the progress you made.”

In the above left photo, Jess Marie Lloyd, James Muchiri, and Lucas Stevens building the well; at right, the restored pond with a purple lotus flower. 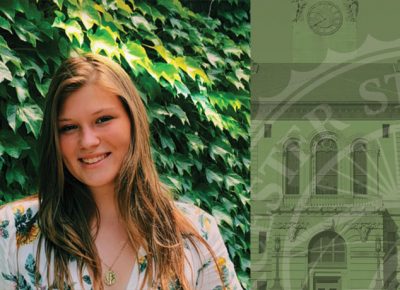 Taylor Orwig ‘19 recently compared flu vaccination rates in the Worcester Public Schools over a three-year period and concluded an incentive program likely improved rates by 25 percent. Orwig conducted the research as part of an internship with the Worcester Department of Health and Human Services (DHHS). Under the direction of Dr. Matilde “Maddie” Castiel, Worcester’s commissioner of . . .