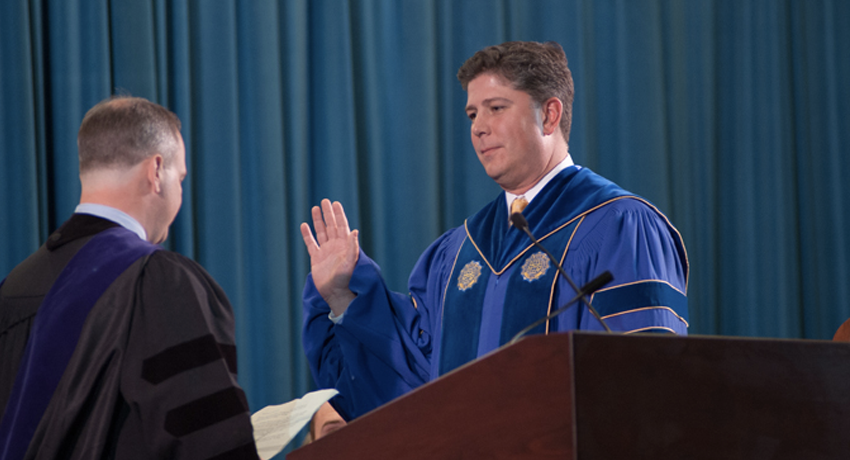 Worcester State University President Barry Maloney announced today, as part of his inauguration ceremony, the largest philanthropic gift in WSU history. The $3 million bequest will create a new honors college, fund study abroad programs for students and faculty, and provide merit-based scholarships. The gift was given by Lt. Col. James Sheehan ’55 (USMC, Retired) and is among the largest philanthropic gifts ever made to a Massachusetts state university.

The inauguration of Maloney as the 11th president of WSU, capped a series of campus events celebrating the University’s academic research and strong ties to its alumni and community. Massachusetts Lieutenant Governor Timothy P. Murray administered the oath of office.

“I’m both inspired and humbled by this generous recognition of Worcester State’s achievements and Lieutenant Colonel Sheehan’s belief in our vision for the future,” President Maloney said. “This gift provides funding for programs that will truly take our academics to a new level, from richer opportunities for students and faculty to study abroad to the exciting establishment of an honors college and merit scholarships to help us continue to attract the brightest young minds in the area.”

A graduate of Worcester State Teachers College, as WSU was known in 1955, Lt. Col. Sheehan had a successful career in the U.S. Marine Corps before applying his business and mathematics skills to a career in venture capitalism. With a gift of $500,000 in 2006, Lt. Col. Sheehan established a scholarship to support two students annually as well as provided funding for Academic Excellence Awards that bear his name. With his latest gift, Lt. Col. Sheehan is now the single largest individual contributor in Worcester State University’s history.

“A college degree is one step in a long journey of learning, but that first step is critical,” said Lt. Col. Sheehan. “These young students should be able to make the most of their time at Worcester State; if we can help them do that, I think we should.”

“This gift recognizes the transformational experience that Worcester State provided to Lieutenant Colonel Sheehan and continues to provide to today’s students,” said President Maloney. “By supporting programs of excellence, it is raising the bar for outstanding academic programming and extracurricular learning opportunities.”

The gift also complements the investments the state is making as enrollment at Worcester State reaches historic highs. “Governor Patrick and our administration are making strategic investments to ensure students have access to state-of-the-art facilities that will enhance their learning experience and prepare them for the 21st century workforce,” said Lieutenant Governor Murray. “President Maloney has proven to be a great partner, and I look forward to continuing to work with him to fulfill this vision for Worcester State University.”

Lieutenant Governor Murray and other dignitaries praised Maloney for his strategic and open leadership style.

“In a short period of time, he has demonstrated what a great leader he is not only to the University, but to the City of Worcester and the Commonwealth of Massachusetts,” said Murray.

Senator Harriette Chandler said that the event was a “major magic moment in Worcester State history,” and called the university “the crown jewel of the public higher education system.”

Representative John Binienda recalled how much the campus has grown since his graduation in 1970—when the campus had only three buildings—and noted that it is about to undertake that largest capital expansion plan in its history. “It is the institution that made a difference in my life,” he said.

Binienda also remarked on the long tenure of WSU presidents. “Since its founding in 1874, there have only been 11 presidents. They don’t leave because they want to be here.”

Representative John Mahoney noted that President Maloney demonstrates his leadership by treating everyone with kindness and respect. “I know this is going to be an exciting time for the University,” he said.

The event featured a keynote address from Dr. Frederick Woodward, who served as Westfield State University’s president from 1997 to 2004.

“This inauguration is a major moment in the life of our University,” said John Brissette, chair of the University Board of Trustees and graduate of the Class of 1988. “We have much to be proud of and a bright future to look toward with a new wellness center, residence hall, as well as many other developments.”

President Maloney assumed his duties as president on July 1, 2011, and over the past 15 months, the University has increased its full-time faculty, grew student enrollment and fundraising, expanded its student engagement, community-based learning, and student-exchange and study abroad opportunities.

Lt. Col. Sheehan’s gift supports the long-range vision of President Maloney, who is seeking to expand the range and quality of learning experiences to which Worcester State University students have access.

“We will commit ourselves to quadruple both our study away participation and our international student population by 2018,” said President Maloney in his speech to students, faculty, staff, alumni, delegates, and guests.

He also pledged to bolster WSU’s community-based learning. During the 2011-12 academic year, the WSU community devoted 138,510 hours of service working with 389 partners. Over 2,000 students were engaged in community-based research, internships, clinicals, practicums, service-learning, and volunteerism.

President Maloney pledged to do even more. “Five years from now, every graduating senior will have completed a meaningful real-world learning experience,” he said.

Worcester Mayor Joseph M. Petty praised President Maloney and the students for their connection to the city. “Every day, WSU students are in our churches, our offices, our museums, our schools, and our shelters,” he said.

Support for scholarship and research is another priority for President Maloney.  One of several examples of the power of student research and scholarship he referred to featured Kathryn Fokas, who graduated in 2010 and received a Lt. Col. James F. Sheehan Academic Award all four years she attended WSU.

Fokas is now working on a substance abuse research team at Butler Hospital that is associated with Brown University. Her honors research with Dr. Champika Soysa on personality and coping as predictors of depression, anxiety and stress paved the way for her current position.

“Research and scholarship support hand-in-hand are a powerful combination for our students,” President Maloney said. “I am committed to opening as many doors as possible for our very deserving students.”

WSU Student Government Association President Trevor Sansoucy spoke on behalf of the student body. “Since his arrival, President Maloney has had one constant message for the campus: ‘The student is the most important person on our campus.’ The school is in good hands,” he said.

Speaking on behalf of the university faculty and staff, Dr. Maureen Stefani ’58, M.Ed. ’61, echoed Sansoucy’s comments. “You listen. You hear. You consider other opinions, and it is obvious that students are your main priority,” she said.

Keynote speaker Dr. Woodward echoed President Maloney’s call for excellence.  “The level of education continues to rise, as the demands for higher levels of expertise are required to accomplish the tasks of a more technologically savvy and complex world,” said Woodward. “If we wish to be the nation we wish to be and satisfy this nation’s need for highly educated persons to fill the thousands of vacant professional positions unfilled today, this effort must be at the forefront of discussions in higher education.”

On behalf of the University and the Commonwealth of Massachusetts, Trustees Chair Brissette presented Dr. Woodward with an Honorary Doctoral Degree in Humane Letters.

Commissioner of Public Higher Education Dr. Richard Freeland echoed Woodward’s comments and praised WSU for its excellence. “I commend WSU for engaging with local high schools; for improving and building strong retention and transfer improvement programs, and praise the faculty for leading the state in assessment of learning,” he said. “This is a strong and vibrant campus.”

Gregg Rosen ’86, president of the Worcester State Foundation, praised President Maloney for his engaged leadership style and thanked him for “being a bridge from our past to our future.”

Vincent Matulaitis ’66, president of the Alumni Association’s Advisory Board, also described President Maloney’s open leadership style. “You’ve not only invited alumni to participate in the vibrant life of the university, you’ve also opened your doors – the doors of your office and your home – to us,” he said. “Your level of involvement is greatly appreciated.”

President Maloney expressed thanks to the following sponsors for their support of the inauguration. Due, in part, to their support, no public dollars were spent on the event. Sponsors for the inauguration are Chartwells, Worcester Magazine, Consigli Construction Co., Inc., Lamoureux/Pagano Associates, Architects, TD Bank, and the Association of Professional Administrators/MTA/NEA. Sovereign Bank sponsored the Presidential Lecture “Ocean Soul” featuring Brian Skerry ’84 on Thursday, September 20. 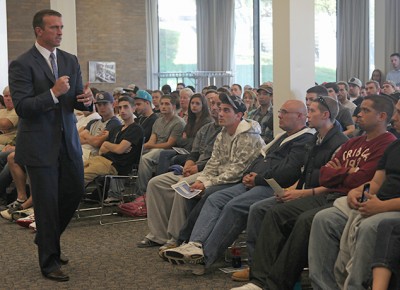 “I have the privilege and honor to travel across the country to get across to someone, to let me change one person’s view of what partying is…I’ve been to prep schools, the ’hood in New . . .