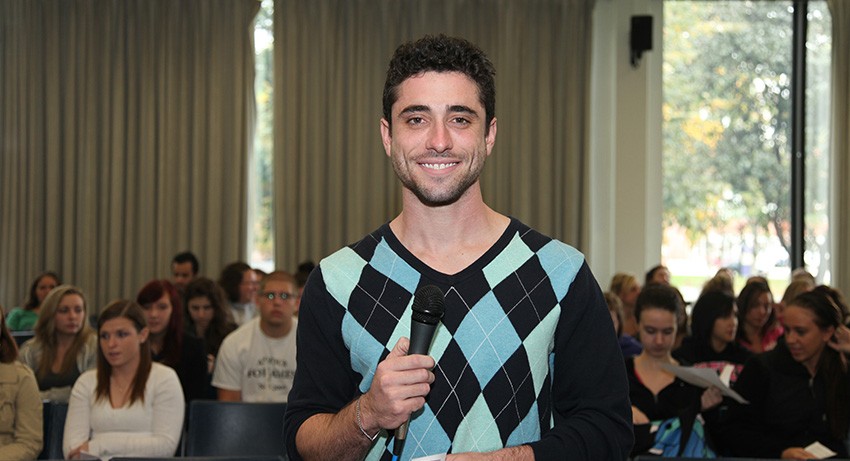 Although it’s been four months since Marc Elliot got his Tourette Syndrome tics under control, he spoke honestly and humorously to nearly 50 WSU students, faculty and staff about his personal journey toward living by his longtime motto “live and let live” at the year’s second Diversity Lecture Wed., Oct. 12.

Elliot explained that at the age of nine, he was diagnosed with Tourette Syndrome, a neurological disorder that causes him to make involuntary motor and vocal tics. As he grew older, his tics manifested in all different forms, ranging from “ticking” inappropriate words to head convulsions to blurting out random noises.

As people walked in the Blue Lounge, Elliot handed them cards, most of which explained Tourette Syndrome and that he has it, but some had numbers and instructions. The numbers represented a length of time from the start of Elliot’s lecture, and the instructions told each person what to say or do at that time. He wanted those people and the audience to feel what it’s like to have Tourette or be in a room with someone who can’t help but bark or shout random words.

“Humor is a really important part of my life,” he said. “Tourette Syndrome is absolutely crazy. It’s a crazy disorder. It’s like having 10 to 20 itches at one time.”

When he tics, Elliot is scratching his internal itches. Later, he asked everyone in the room to stand up and do or shout something random.

Elliot also talked about being born with a rare birth defect, called Hirschsprung’s disease, and living with the side affects of having only four feet of small intestines. He’s had to endure many instances of intolerance in public restrooms. “We live in a culture where people don’t like to go to the bathroom when other people are in the area,” he said.

Elliot offered many accounts of intolerance by strangers over the years and talked about his own struggles with tolerance and his journey toward self-discovery—and its liberating result. Through it all, he came to realize that tolerance and intolerance come down to whether or not someone near him chooses to “live and let live.”

It was a friend who pointed out to Elliot that he was the most intolerant person he knew because he passed judgment on people he came in contact with all the time. He realized that he would pass out the cards about Tourette syndrome under the guise of making others more tolerant of him when in fact he was expecting them to be intolerant of him.

Since then, Elliot has taken courses on joy and undergone treatments to improve his outlook on life and get his tics under control. For instance, he gets botox shots in his neck to keep his head from shaking. But he still chomps his teeth and strains his neck every so often.

“Now I believe I can control my life,” he said.

A student with Tourette syndrome asked Elliot why his treatments greatly reduced his tics. Another student said, “Thank you for sharing. It’s cool to see how many lives you’re affecting.”

Last Tuesday, the Student Center Blue Lounge and Exhibit Area was transformed into a buzzing hub for travel abroad opportunities for students and tales of overseas experiences. The . . .