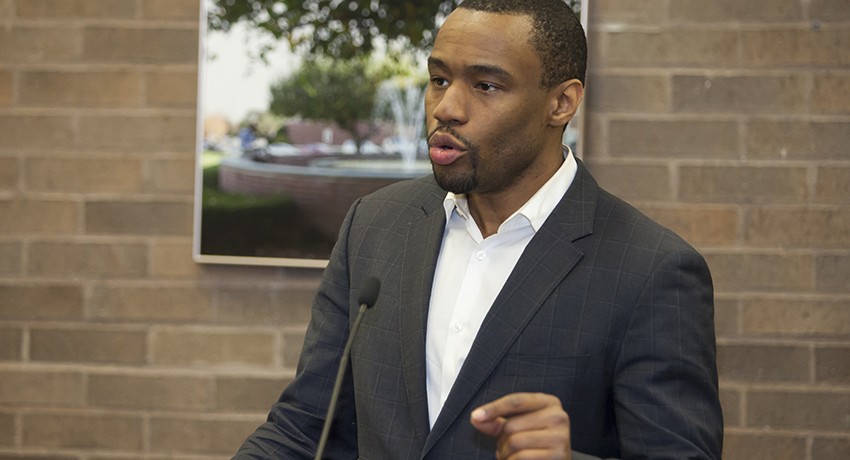 For Dr. Marc Lamont Hill, February is a complicated time of year.

“It’s sort of a mixed bag, Black History Month,” he said. “It’s the one month where all the black speakers get invited places. After that, our schedules are fairly open.” He also noted, sardonically, that the month designated for black history is also the shortest one of the year.

Hill recently spoke at Worcester State University for the annual Courageous Conversations lecture series. An award-winning journalist who is a Distinguished Professor of African American Studies at Morehouse College, Hill talked about America’s selective memory of its troubled past, the issues that our society faces today, and the importance of becoming active in organizations.

While it is important to recognize key figures of the black freedom struggle like Martin Luther King Jr. and Malcolm X, Hill pointed out that were a lot more people involved who were forgotten over time, including women and people in the LGBTQ community.

“I think it is important to rummage through history and retrieve those names that often get excluded from the history books. And not just the people, but the ideas and rituals as well,” he said. Looking at the present through history’s lens is also important.

For the past seven years, Barack Obama’s presidency – known as the “Age of Obama” – has inspired hope and optimism, but has also shown that our racist past is not as distant as we would like to believe. In fact, inequality as whole has been steadily increasing: a rise in poverty, a decimation of organized labor, and more incidents of police brutality against civilians.

“We have to think about the Age of Obama as not really a moment where you have a rise of black political classes and an expanded black middle class,” said Hill. “We have to look at it for what it is: a set of institutional arrangements of power, and an expanded gap between the haves and the have-nots.”

Further complicating the problem, said Hill, is our current culture’s emphasis on promoting the self, which he believes is damaging the power of community.

“We are so filled with talk and self-narration that there is almost no space for listening,” he lamented. Deep listening, as Hill called it, was a moral and ethical project that America should be engaging in. By convincing America to listen to itself, we would have to come to terms with the hypocrisy of our actions versus the democratic utterances and promises of freedom – which had already been recognized by many black authors and activists since the nation’s inception.

“The notion of African people crying out into the wilderness through their letters, their work, their music, their spirituals, their political organizing – it has always been about calling America back to where it promised itself it would be,” he said.

Hill also reminded the audience that after listening, courageous action should follow.

“What does it mean to ‘act bravely’?” he said. “To act bravely, first of all, is to act. You’ve got to do something. And that means joining your organization and being courageous to hold it down even when it’s tough. To go out and to speak when it’s difficult.”

One cannot be afraid of being alone in the struggle against injustice. Hill explained that many black heroes made choices that alienated them from their supporters but proved to be on the right side of history.

“You’re always going to be alone in the present,” he said. “History will always vindicate you, but you’ve got to be able to stand by yourself and be alone … You have to be willing to take risks, to make the commitment to speak the truths, and to embrace radical solitude.”

Hill has held positions at Columbia University and Temple University and holds a Ph.D. from the University of Pennsylvania. He is the author of three books: the award winning Beats, Rhymes, and Classroom Life: Hip-Hop Pedagogy and the Politics of Identity; The Classroom and the Cell: Conversations on Black Life in America; and The Barbershop Notebooks: Reflections on Culture, Politics and Education.

The event was co-sponsored by Third World Alliance; the History and Political Science, Sociology, and Philosophy Departments; Office of Multicultural Affairs; Brutus/Goldwyn Center for the Study of Human Rights; Amnesty International; Women Studies; and the Intergenerational Urban Institute.

The Kevin Lyons Baseball Diamond at Rockwood Park, the home of the WSU baseball team since 2012, recently received national recognition as the best maintained college field in the country. The . . .