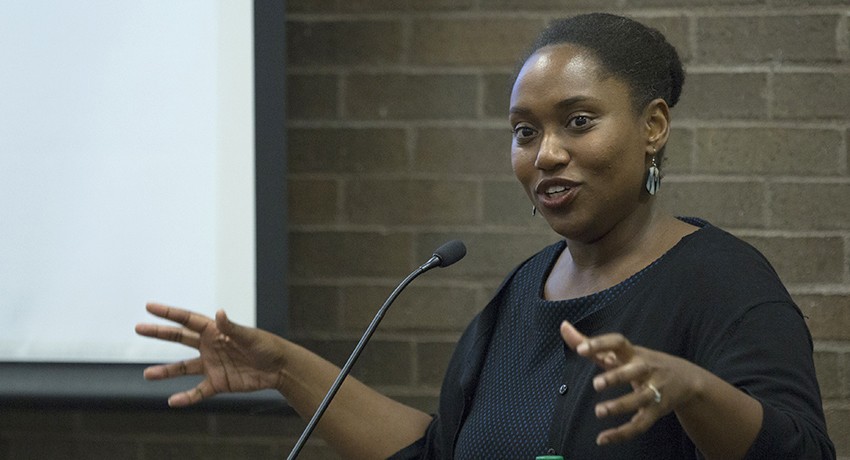 Marcia Chatelain’s story as an activist didn’t start when she finished her Ph.D. or published her first book, but in August 2014 with the Ferguson, Mo., riots and the hashtag #fergusonsyllabus.

“I didn’t think this was going to be a thing, because most people aren’t listening to me on Twitter. I’m just a professor with a few thousand followers,” she said. “But I was hoping and able to show people that being honest and contributing a little bit to a larger conversation does make a difference.”

Chatelain, associate professor of history and African American studies at Georgetown University, visited Worcester State University on Thursday, October 6 to give an afternoon talk on “National Climate: Race and Social Justice,” which was open to students, faculty, and the public. She also gave another talk on student activism earlier in the day and had lunch with many students, faculty and staff.

Introductions for Chatelain were made by Sylvia Rodriguez, president of the student organization Third World Alliance and WSU’s Provost and Vice President for Academic Affairs Lois Wims, Ph.D., who first heard Chatelain on NPR and immediately developed a plan to invite her to campus to speak to the students and faculty.

During the lecture, Chatelain discussed the past few years of her life, traveling to college campuses and talking about race, policing, and social movements. Her overarching goal is to create a conversation for the students to talk about the places and topics where they are uncertain, including challenging long-held beliefs like the idea of the American dream.

“I think we are in a time that really exemplifies mixed emotions,” she continued. “What does it mean to live in a time where we see so much progress, and we know so many people and so many communities that are left behind?”

When Ferguson first erupted, Chatelain was invited to go on MSNBC and talk about it, and initially she was indifferent to the protests given the long history of short-lived social movements and lack of public interest.

“I thought that we already knew that people are killed by police, that communities are upset and hurt, but we also know that those stories never go anywhere and that people are so ready to forget these tragedies. What was going to make this different?” she said.

But she was soon proven wrong. The protests and riots in Ferguson grew so out of control during the days following the shooting of Ferguson resident Michael Brown by a police officer that the town decided it was necessary to cancel the first day of school.

“Something about that broke my heart,” said Chatelain. “The idea that this was going to be how kids remember that year of school really struck me to the core. Canceling the first day of school, the place where kids feel the most excited, and also the fact that my own freshmen students at Georgetown who were beginning college with [Ferguson] as the backdrop, made me think, ‘How can I talk about this in the classroom?’”

So she turned to Twitter and reached out to her fellow professors. “I said, ‘Can you please dedicate the first day of classes to Michael Brown and the other young people of Ferguson who would not have their first day of school? And if you don’t know what to talk about or to teach, I will tell you what to do.’” By using the hashtag #fergusonsyllabus, Chatelain and her peers were able to share articles, poems, songs, pieces of art, published studies, and other media so as to respect and honor the sacrifices that young people were making to fight injustice.

Chatelain dismissed the criticism that internet social justice movements are merely “slacktivism” and unable to inspire real change. “These slogans—‘Black Lives Matter,’ ‘Hands Up, Don’t Shoot’—are not going to tell you the complex ideas behind a movement, I understand that,” she said, “but what they do is that they invite people to come closer to a set of ideas in similar ways to the strategies of the 1960s.”

“These hashtags and slogans are part of a long history of people using catchy phrases to try to get people excited about movements,” she added.

Chatelain championed colleges and universities as places for young people to commune and organize around the issues that matter to them. As higher education becomes more and more diverse and open to people from different backgrounds, she said, the more it will become a space for people to think about the state of the world and how they can make a difference.

“At the end of the day, social justice movements are about appearing in person and coming together to be with people,” she said, “and I think that no matter how advanced our technology gets, how good the quality of our Wi-Fi is, or what new social media platform emerges, movements are impossible without real people showing up, spending time with each other, and talking.”

Chatelain’s visit was sponsored by several interdisciplinary programs, departments, and administrative units at WSU, including the President’s Office and Multicultural Affairs Office. The Dennis Brutus/Merrill Goldwyn Center for the Study of Human Rights and Third World Alliance also co-sponsored the day’s events. 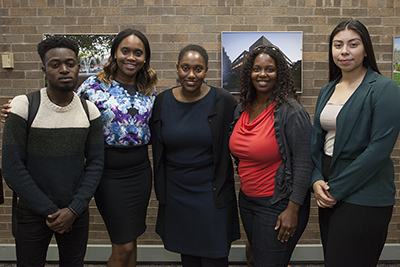 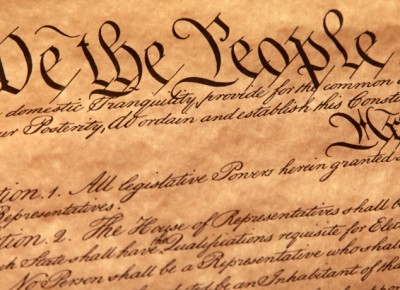 As November draws near, the United States is turning a vast amount of its attention toward the presidential election. Being the strong center of media attention for the past two years, the candidates . . .