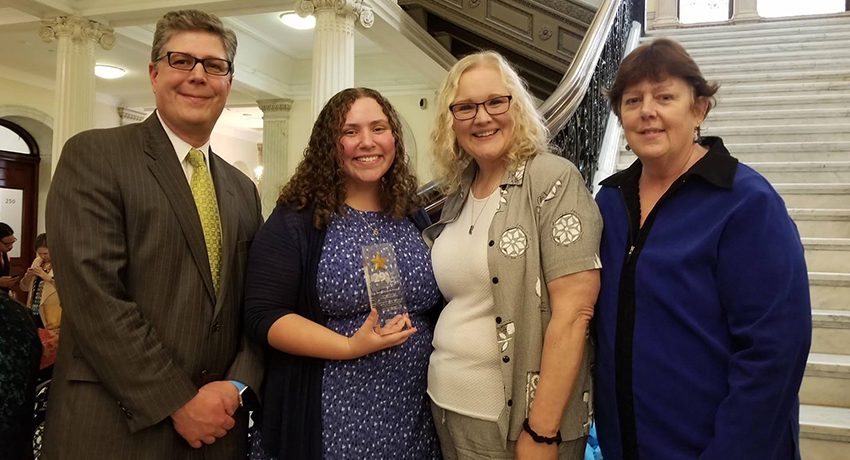 Novack also received the W.E.B. Du Bois Academic Recognition Award for Community Based Research from the Sociology Department in late April, and will be earning degrees in mathematics with a specialization in secondary education and sociology.

In addition, she has an impressive record of volunteerism aimed at helping those in the Worcester community, at places such as Girls Inc. and North High School. She also has mentored first-generation students at Worcester State via the Alternatives for Individual Development program and has volunteered as one of Worcester Polytechnic Institute’s Girls Who Code. She aims to earn a Ph.D. and to one day teach and undertake research at the college level.

“Janet Novack is a great example of the kind of students Worcester State University graduates every year—students who excel academically while devoting significant time outside of the classroom to better their communities,” he said. “Janet’s extraordinary dedication to the Worcester community is a key reason we are recognizing her, and we thank her for that service.”

The 29 Who Shine awards are presented at the start of each commencement season to students from each of the Commonwealth’s 29 public campuses, made up of 15 community colleges, nine state universities, and the five campuses of the University of Massachusetts. On hand to recognize them were Governor Baker, other state officials, and leaders of each sector of the higher education system.

“The ‘29 Who Shine’ awards are an important recognition of the impressive work Massachusetts’ college students do to make the Commonwealth’s workforce the best in the country,” Governor Baker said.

“The 29 honorees represent a wide range of academic programs from across the Commonwealth,” Lieutenant Governor Karyn Polito said. “Seeing young people like these contribute so much to their communities assures us that the future of our state remains bright.”

The 29 public college and university campuses in the Commonwealth selected the honorees for the 29 Who Shine awards based on criteria established by the DHE. Students are required to be state residents who have strong academic profiles and a record of civic leadership and engagement.

About the Photo: Janet Novack (center left) stands with her mother, Terrie Novack (center right), President Barry Maloney, and Director of Financial Aid Jayne McGinn, who nominated her for this year’s 29 Who Shine award. 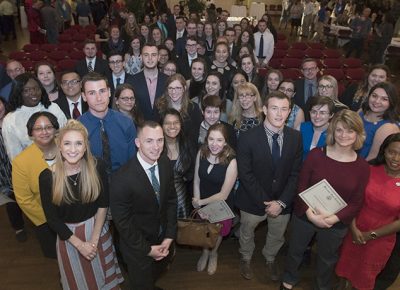 Several service members and veterans, many non-traditionally aged students, several student-athletes, and several students who are registered with Student Accessibility Services were among those who received 80 academic awards, which were given at the April 26 Academic Achievement Awards Ceremony at Mechanics Hall in Worcester. Friends and family of the students were gathered in the balcony . . .