Worcester State’s men’s hockey raised money and awareness for the fight against breast cancer on Feb. 17, in its first “Skating Strides” game.

The Lancers took part in “Skating Strides Against Breast Cancer” with the Pre-Health Club at Worcester State to raise money for the Ellie Fund, a local non-profit that provides essential support services for breast cancer patients. The Ellie Fund served 71 patients in Worcester in 2021, plus an additional 82 household members, with costs reaching nearly $100,000.

“Worcester State’s Men’s Ice Hockey team is honored to host its first Skating Strides game in support of the Ellie Fund,” said alternate captain Sean Gavin (Galena, Ohio), who helped to organize the event. “With Worcester being the second most served city in Massachusetts, this is a great opportunity for student-athletes and those a part of the Worcester State community to give back to the surrounding area and support a great cause. We are elated to partner with the Ellie Fund and support such an important cause.”

“The Worcester State Men’s Hockey Program’s Skating Strides Event is a great opportunity to join in the fight to defeat Breast Cancer,” said Head Coach Bob Deraney. “Partnering with the Ellie Fund gives us the perfect way to do our part to help the people in our community dealing with this terrible disease. We are proud to join in this fight and look forward to the day that the medical community eradicates this disease.”

During the matchup against Salem State University, the Lancers also made mention of several women with connections to the team who have beaten the disease or are fighting to do so. Among the names were Jackie Gavin, Jennifer Hinton, Kim Wingart, Ida Guerrero, Karen Walchli, Jane Hofmann, Cristy Lefere, Donna DeFeudis, and Barbara Fahey. 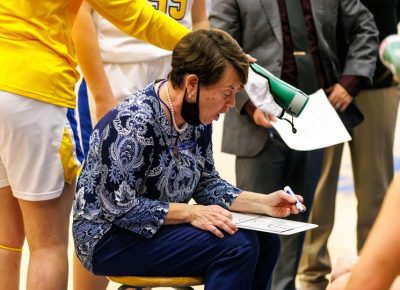 FITCHBURG, Mass. –Worcester State women's basketball head coach Karen Tessmer collected her 350th career victory on Saturday, Feb. 12, leading the Lancers to a 83-47 victory over Fitchburg State in Massachusetts State Collegiate Athletic Conference (MASCAC) play. Tessmer has been with the program since 1994, and is now in her 28th year on the Worcester State bench. The Lancers (10-11, 5-4 . . .