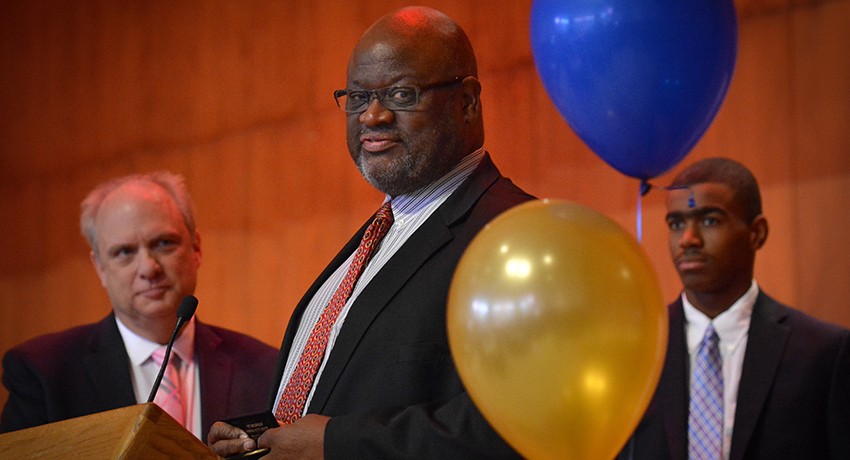 The 23rd Annual Martin Luther King, Jr. Youth Breakfast elicited a roller coaster of emotions from the attendees of the ceremony.

In one minute, the audience was silently wiping away their tears after watching the heartbreaking but powerful video performance “I Still Can’t Breathe” by the Chester Children’s Chorus, and in the next they were laughing and clapping along with the young local rapper Novian Wright, a 13-year-old student at Forest Grove Middle School in Worcester. Then young and old alike shared smiles as soloist Vanessa Ford lead them in singing “Lift Up Your Voice and Sing,” also known as “The Black National Anthem.”

Members of the Worcester community were gathered at the May Street Auditorium to honor the life of Martin Luther King, Jr. and to celebrate the winners of the M.L.K., Jr. Poetry Contest and Service Awards. Worcester State University, which has been hosting the event for the past 23 years, invited a number of city officials, school board members, and representatives from a number of local non-profit organizations.

President Barry Maloney offered opening remarks for the ceremony. “It is my honor to bring greetings from Worcester State University this morning on a day that celebrates the youth of the city of Worcester and what I am sure will be a wonderful celebration of Dr. King’s life,” he said.

Maloney also presented a WSU scholarship to Samuel R. Kennedy, a 23-year-old senior who is majoring in criminal justice and preparing for a law enforcement career in California. Kennedy, whose parents emigrated from Russia to the United States in 1991, said that he will use his studies and become “a positive influence and push for positive changes by leading by example with my colleagues, both professionally and personally” in dealing with tension between police and civilians.

The ceremony included a number of dance and vocal performances of youth groups, such as the Boys and Girls Club of Worcester, the Madrigal Choir of Doherty Memorial High School, the Friendly House Teen Leadership Group, and the Worcester chapter of W.A.I.T. (Washington AIDS International Teens), that paid tribute to King’s legacy and to the theme of this year’s ceremony, “Social Justice and Activism.”

The two awardees of the M.L.K., Jr. Service Awards, Ogretta McNeil and Elizabeth Price, were honored posthumously for their dedication and community outreach to the city of Worcester. The awards were presented by Worcester Mayor Joseph M. Petty, who knew the recipients personally and attested to their hard work and devotion to city youth. The women’s children were in attendance to accept the awards on their mothers’ behalf.

McNeil served for 10 years on the Worcester School Committee, and also served institutions such as EcoTarium, the University of Massachusetts Medical Center, LeMoyne College, and the American Antiquarian Society.

Price was the founder and director of Prospect House, a human services agency that helped those in poverty. She was the first African-American woman elected to the Worcester School Committee and later served as an elected member of the charter commission that created Worcester’s current municipal government.

“One of the things that has been really quite remarkable are the stories [about our mother] from people who have talked about how she came into their lives,” said one of McNeil’s sons. “During her time on the School Committee, she visited every school and prepared countless graduation speeches. She cared a lot about our public schools and young people.”

Price’s family remarked on their mother’s unconditional love for her community. “Our mother believed in three things: the Bible, people, and family…but you didn’t have to be family to be loved by my mother. As long as you behaved in a proper, respectful manner, you were family. I don’t have enough fingers or toes to count the number of people who came to Prospect House, whether they were eating at our table or sleeping in my room. When I complained, she said, ‘They don’t have what we have.’ My mother would feed you, clothe you, find you a job and a house. She fought for equal rights, women’s rights, and the right to just be treated fairly regardless of race, creed, color, or national origin.”

As a symbolic gesture to the divisive political atmosphere of the 2016 presidential election, people joined hands at the end of the ceremony and sang “We Shall Overcome,” the Pete Seeger classic that became the anthem of Civil Rights Movement.

“Sing out louder!” said Ford before the final verse. “I want them to hear us down the street and all the way out to the White House.” 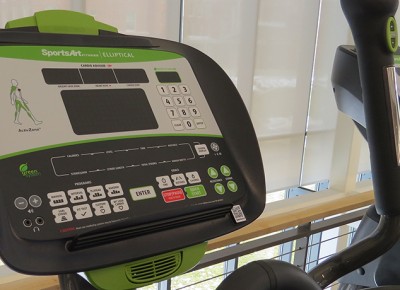 Worcester State University students and employees working out at the Wellness Center are producing more than just sweat as they use the fitness equipment, and they may not even know it. The new . . .