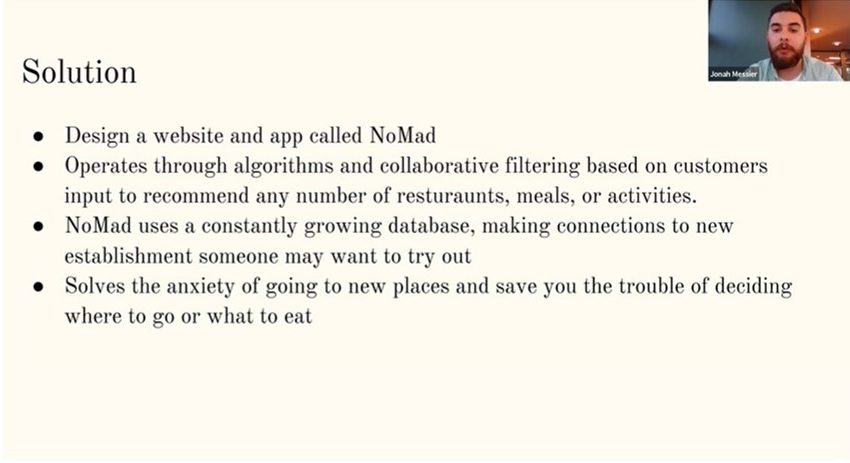 NoMad, a concept for a mobile application that quickly matches users with new dining experiences based upon their preferences, won the 2022 Robert K. O’Brien ’58 Next Big Idea Contest on April 20. Jonah Messier, who is scheduled to graduate in December, pitched the venture to the panel of three judges emphasizing that NoMad makes it easy for users to decide what to do when heading out for the evening. Jonah shares the $2,000 first place prize with team mates Dominic Landgren, Thomas Marcotte, and Tristin Tran. The members of the team began working on their concept in an entrepreneurship class this semester, BA402: Designing Your Business Plan.

“This was an absolute team effort,” Messier said. “We weren’t really going into it expecting to win. We just really wanted to see where we could get.” Although the team members are preparing to graduate and go their separate ways, Messier said, “I wouldn’t be surprised if eventually we end up reaching out to each other again” and continuing with development of the app.

Second place and $1,500 went to Anthony Shrum for Grizzled GoalTending, an ice hockey goalie coaching service based in Worcester, MA that teaches the ‘grizzled’ methodology of goaltending.  This is Anthony’s second time competing in the finals of the Next Big Idea and his highest placing to date. Third place and $1000 went to Aspen Zheng for WeeHere, a chat website that provides active listeners for elderly people who are lonely or want someone to listen to their stories. This type of concept is gaining in popularity in Asia.

The five finalists were chosen from a field of ten ventures that had submitted business briefs in early April. Each finalist gave a five-minute presentation through a live Zoom conference call and then responded to questions from the three judges:

Robert K. O’Brien founded the pitch contest in 2013 and funded it for the first five years as a way to inspire students to start entrepreneurial ventures and promote inventiveness. Currently the competition is funded through a gift from the Esler Family Foundation. The competition is one of several events offered by Worcester State’s Center for Entrepreneurship, which provides a variety of academic, co-curricular, and experiential learning opportunities for students from all majors to explore innovation and the entrepreneurial mindset. For more information and to explore available scholarships and venture funds, visit www.worcester.edu/Center-for-Entrepreneurship/. 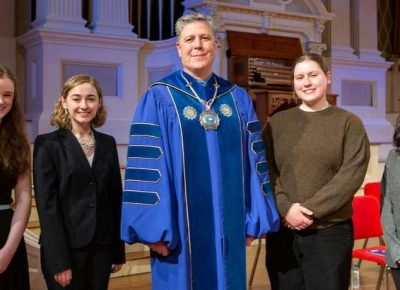 The university’s four highest achieving students this year bring wide ranging interests from the arts to biology, and a passion for helping others. The four students – who have the highest GPA . . .