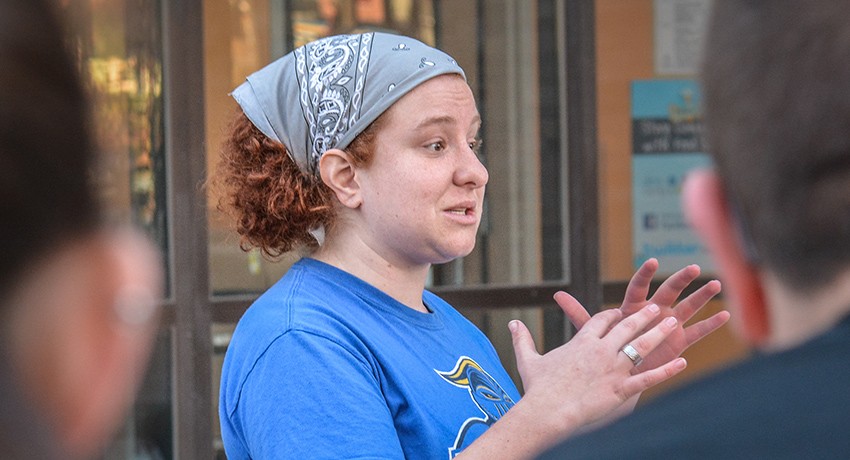 Momentum to Take Active Minds to the National Level

At a time when the mental health of college students is a primary concern, junior nursing major Elizabeth Dugas has watched the membership of Worcester State University’s Active Minds chapter flourish under her leadership.

The first Active Minds chapter was founded in 2000 by a University of Pennsylvania student who lost her brother, who also was a college student, to suicide. “She realized there wasn’t enough awareness about mental health services on college campuses,” Dugas says. WSU’s Active Minds chapter, founded in 2011 by Meg Sullivan with the help of the Counseling Center, is now one of 600 chapters in four countries.

When Dugas first joined Active Minds in the 2015 spring semester, there were four fellow students at her first meeting. “I was originally drawn to it because my friends were members and they were baking cookies for meetings,” she recalls. “They refused to give me a cookie until I showed up at a meeting.” (To this day, there is a container of freshly baked cookies at each meeting.)

The following year, Dugas decided to take the position of president-elect and the club saw its membership climb to 15. She became president this year and membership now stands at 35.

Dugas attributes the growth to “bringing mental health to students in a way they could connect with” and great support from the chapter’s executive board, members, and WSU staff, especially Assistant Dean of Student Affairs and Director of the Counseling Services Laura Murphy and Associate Director of Student Involvement and Leadership Development Kristie McNamara. It’s a mission in line with that of the national organization. “We serve the most vulnerable age groups because people typically have their first mental illness crisis at the age of 18. We call it your crisis, or finding, moment,” she says.

Weekly meetings are spent doing an activity, learning about a mental illness or service, and planning campus-wide activities and programs. At a recent meeting, members played a game of Giants-Wizards-Elves, Dugas talked about seasonal affective disorder, and she closed the meeting with a moment of mindfulness.

“Take that deep breath, bring in the light of your passion—why you’re here at Worcester State University, what you’re striving for—and send it to those dark areas of stress. Store it in your areas of passion. Draw on that passion to sustain you through your midterms and the rest of the semester,” she encouraged the members in attendance.

The club’s campus-wide programs range from bringing in speakers like Meg Hutchinson and Kevin Hines to setting up a trivia game for mental health information.

“Through Active Minds, we’re able to give people a way to relate to mental health and a better way to relate to each other,” Dugas explains. “We give people the space to say, ‘It’s OK to have a mental illness. We’re promoting that space on campus. We say, ‘It’s OK to have a mental health concern,’ and we’re here to help you and share the things can we do to help you help yourself.”

The chapter designs its programming around the needs of WSU students. For instance, members know, based on results from an annual survey conducted by the Health Promotion Office, that 69 percent of WSU students have felt very sad or overwhelmed in the past year.

“So we do a lot around stress, self-care, and advocating for friends,” Dugas says. “We have a saying, ‘There is no such thing as a white balloon.’ The white balloon symbolizes someone who’s never been affected by mental illness.”

The chapter also works with mental health agencies and organizations in the community, such as Alternatives, Bridge, and the state Department of Mental Health. “In mental health, there’s an interest in working with other organizations because it touches so many people in so many situations,” Dugas says.

“It’s composed of students from all over the country who will help lead Active Minds’ direction in 2017-18,” she says. ”We will work to provide a touch point for all of the school chapters, program ideas, fundraising, and community outreach. We will also help run the largest convention on mental health on college campuses.”

Just as she has done at Worcester State, Dugas says she wants to focus on programming at individual chapters and sharing creative and successful ideas. “What one group is doing can’t grow if no one knows about it,” she says, pointing to the white balloon analogy as an example. “It originally came from an Active Minds group from Missouri.”

The WSU chapter is one of six in the Massachusetts State University System and has good connections with Active Minds chapters in Connecticut. “I would like to see that branch out to East Coast and West Coast chapters,” she says.

In addition to her work for Active Minds on the local and national level, Dugas hopes to find an internship in mental health nursing or clinical pediatrics. After graduating, she wants to work for Doctors without Borders and then return to the United States to earn her master’s degree in nursing and eventually become a professor of nursing.

The Baker-Polito Administration recently announced that a select group of Massachusetts state universities and community colleges have been awarded a total of $1.25 million through the Department of . . .