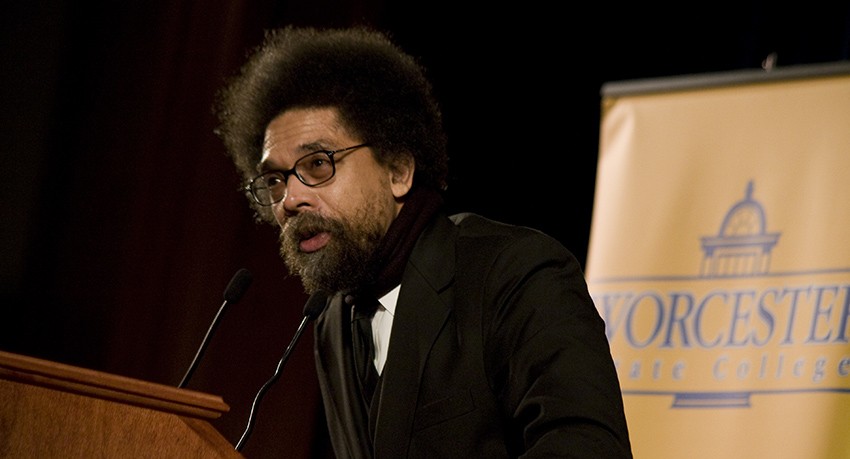 Dr. West praised the college for launching the series and being committed to both academic excellence and dialogue. “Thank God for Worcester State College,” he said. “You need both an education and courageous conversations.” Dr. West stressed the importance of including all voices in the dialogue. “When we engage in courageous conversations, none of us has a monopoly on the truth,” he added.

Currently the Class of 1943 Professor at Princeton University, Dr. West is the author of the bestselling book, Race Matters, a searing analysis of racism in American democracy. In his last book Democracy Matters, Dr. West analyzes the arrested development of democracy both in America and in the crisis-ridden Middle East. Dr. West has published 16 other books and has edited 13 texts.

Dr. West delivered a passionate lecture to the crowd on a broad range of topics from history and philosophy to hip hop and rap.  But he focused his lecture on unconditional love and humanity.  Known for his provocative style, he told the audience at the outset: “I want to say something that unnerves you.”

Dr. West embraced the courageous conversations theme and urged them all to “have the courage to think for yourself.  It takes courage to seriously wrestle with race.”

Drawing on numerous cultural, historical and literary references, Dr. West made the case that the truly courageous have always resisted the temptation to respond to injustice with violence.  He spoke of Dr. Martin Luther King Jr. being reduced to tears when he delivered the eulogy for young girls who were murdered by the Ku Klux Klan.  He praised King and other leaders for their nonviolent stance, their humanity and their unconditional love.

But he acknowledged that the temptation to resort to violence is always there and he posed the provocative question: “Why don’t we have a black al-Qaida in the United States? Four hundred years of oppression and no al-Qaida.”

“Hatred,” he said, “is cowardly.” Instead he urged the audience to embrace love. “Justice is what love looks like in public,” he said.  “When you love someone, you have a sense of righteous indignation when they are victims of injustice.”

But he worries that our current culture does not challenge injustice. “The last 40 years have been a political ice age,” he said. “It is fashionable to be indifferent to other’s suffering…indifference to evil is more evil that evil itself.”

WSC President Dr. Janelle Ashley said the College is committed to bringing noted scholars to the campus and community. “Worcester State College values spirited debate and intellectual challenge,” she said. “I am so proud that our students, faculty and staff were instrumental in bringing Dr. West here. We are delighted to be sharing this very important event with the entire community.”

Third World Alliance President Jonathon Perez, a junior majoring in sociology and Spanish, said Dr. West will bring a new awareness to the community. “He is an intellectual who has been very open about making religion part of his dialogue,” he said. “That is what personally appealed to me. Also, he urges that people be judged by who they are and what they bring to the table.”

Worcester State College will participate in, “Focus The Nation,” an unprecedented national teach-in on global warming solutions, Thursday, January 31.  The day-long teach-in event will be . . .