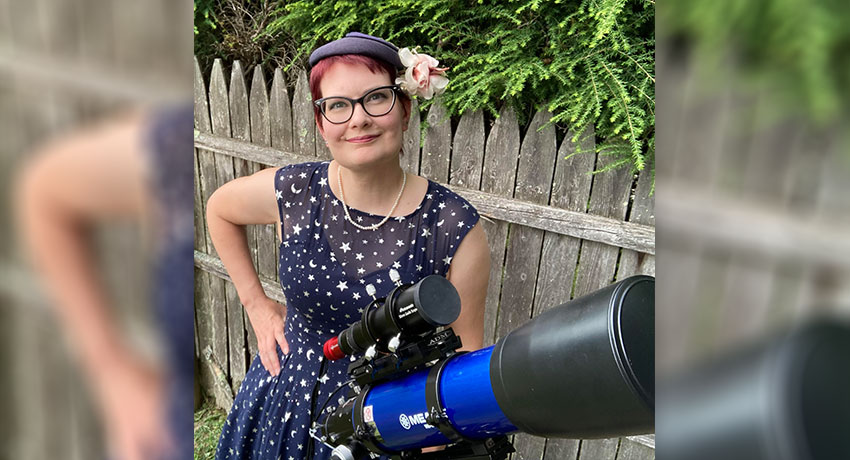 NASA Grant to Help Melanie Meadors ’21 Reach for the Stars

When Melanie Meadors ’21 finally got the chance to return to college after raising her son, she wanted to reach for the stars.

Now, NASA is helping to get her there.

Meadors was recently awarded a grant from the Massachusetts Space Grant Consortium, which was established by NASA under the National Space Grant College and Fellowship Program, created by Congress in 1987. The grants are meant to promote education in space science and space engineering. Meadors is a geography major with a history minor and hopes someday to have a career as a science communicator and historian.

A member of the local Aldrich Astronomical Society, Meadors plans to use the grant to examine techniques of calibration for astrophotography.

“When you take a picture of the night sky, it’s hard to take just one picture and have it come out perfectly, especially if it’s taken through a telescope of a nebula or something like that,” she says. “There’s so much background radiation on Earth and there’s the sun, and living in the city is especially hard because there’s light pollution. There are also errors that can arise from your own equipment. Calibration is basically the techniques you can use to get rid of all that and make your picture clearer.”

Meadors says Nabin Malakar, Ph.D., assistant professor of Earth, Environment, and Physics at WSU, helped her apply for the grant. He encouraged her to try for it even though less funding was available this year and the COVID-19 pandemic meant there would be limitations on what could be done with the money.

“So, I came up with an idea and I was, like, ‘There’s no way that this is going to go through or that I’m going to be accepted for it.’ I just kind of wrote it off, and then a couple of weeks later I got an email from them and I was, like, ‘OK, great!’”

Meadors says the opportunities the grant opens up are especially meaningful because she is the first in her family to attend a four-year college. She had enrolled in college right after high school but had to drop out after a few years when she ran out of money. She then married and focused on raising her son. After he turned 18, Meadors enrolled at Worcester State as a junior last year.

Meadors plans to turn her telescope toward exoplanets, which are planets that exist outside the solar system. It’s a relatively new area of study—the first confirmation of exoplanets’ existence occurred in 1992. With her growing knowledge of astrophotography calibration techniques, Meadors wants to better understand how to analyze and make models of these distant stars

New exoplanets are continually being discovered by TESS, the Transiting Exoplanet Survey Satellite mission being run by MIT in conjunction with NASA.  Meadors hopes to participate in the related TFOP program (TESS Follow-up Observing Program), in which volunteer astronomers do follow-up research on exoplanets that the TESS satellite has located.

“They have these candidate stars that they’ve discovered with their satellite and they need people on earth with telescopes to kind of confirm those sightings,” she says.

Like it has for so many people, the pandemic put a temporary crimp in her plans because virus safety protocols mean she can’t readily use the Aldrich Astronomical Society’s powerful telescope to produce images for her TESS/TFOP application.

“To apply, you have to show that your equipment is up to the standards that they need and that you know how to do it,” she says. “For now, I’m using my own backyard set up. My telescope is smaller, so my work isn’t quite up to par for TESS. But learning all of this stuff will help me when I am eventually able to use a larger telescope to do higher-level work.”

Meadors’ grant proposal calls for creating a booklet with instructions to inspire amateur scientists and backyard astronomers who want to get started with astrophotography.

“My project is actually going to be a booklet on how anyone can get into astrophotography and make decent pictures of the night sky,” she says.

Meadors plans to continue reaching for the stars after graduating from Worcester State.

“I’m interested in the history of the space program,” she says. I’m looking at Harvard’s History of Science graduate program, as well as MIT’s science writing program, so I can develop a career where I can share my passion for these things with others, maybe as a museum curator and communicator,” she says.

Katie Commerford ’20 is excited to begin work as a program assistant in the Foreign Service Institute in Washington D.C., an opportunity came about through an internship in her final semester of . . .