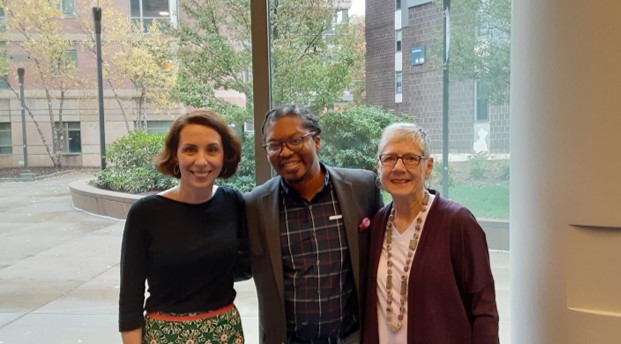 Introducing his cycle of poems “They Said I Was an Alternate,” Nathan McClain explained that an alternate juror does everything the other jurors do, but, when it comes time to deliberate, they don’t get a say. “I thought that said something profound about my lived experience,” he said.

McClain was on campus on Monday, Oct. 24, for a reading of his work and a discussion of the craft of writing as part of the Judith O’Connell Hoyer Poetry Reading Series, organized by Heather Treseler, professor in the English Department. Treseler said when she read McClain’s first book, Scale, published in 2017, “I was astonished at how his carefully crafted poems lingered in my mind for days and weeks, expanding in their power and demanding rereading. Nathan’s voice is a wise, incisive, and lasting one.”

Many of the poems McClain read from that volume and his recently published second collection of poems, Previously Owned, used metaphor to address topics like racism and the legacy of slavery, generational trauma, and romantic love.

“Arguably, all poems are about one of two things: love and loss,” McClain said. Some poems are about both, such as the poem he opened the reading with, “Fire Destroys Beloved Chicago Bakery,” from his first collection, Scale. The poem, like many others in the collection, deals with grieving and coming to terms with an absent father. “How is it that you misread ‘fire’ / as ‘father,’” the poem begins, and ends, asking, “why you smell him in every ruin, every / smoldering heap of ash and brick?”

In “Love Elegy in the Chinese Garden, with Koi,” from the same collection, the poem’s narrator asks, “who hasn’t done that— // loved so intently even after everything / has gone? Loved something that has washed // its hands of you?” and decides, finally, “I know I’m like those koi, / still, with their popping mouths, that would kiss // those hands again if given the chance. So dumb.”

In another poem, “The World Is Full,” McClain finds profound poetic fodder from his family’s chickens. He writes, “No one // had bothered to name them. To name / them, we believed, would make them // harder to kill and eat, but how / wrong we were. I believed // I could save them, or that saving them / meant I loved them, that my love was good // for something.”

McClain “came to poetry late,” he told the audience, starting to write as a 19-year-old community college student. He went on to graduate from the Warren Wilson College MFA Program. Now, he is assistant professor of creative writing and African American literary arts at Hampshire College in Amherst and the poetry editor of The Massachusetts Review.

McClain’s journey seemed to touch a chord with the Worcester State students in the audience, who expressed curiosity about his path from community college to being a professor and poetry editor. McClain credited the communities, such as online writing groups, he’s been part of in his life with his success. He encouraged students to find their own communities and to “stay open,” reading as much as they can and listening to and absorbing life around them.

When asked by a student how to not feel too much pressure to meet life-goal deadlines, McClain, who is close to 40, contrasted himself with a basketball player who, at his age, would be getting ready to retire. “I’m still a baby writer in many ways,” he said. “There’s still a lot of development that I have yet to do.”

Worcester State’s poetry series—which would become the Judith O’Connell Hoyer Poetry Reading Series—was started in 2013 by Treseler. Despite having only a shoestring budget, Treseler was able to bring two poets—Alan Michael Parker and Joy Katz—to campus for a reading and craft talk. The following year, through a collaboration with Worcester Polytechnic Institute, Worcester State hosted Forrest Gander, who would soon win the Pulitzer Prize, and Christina Davis.

Judith Hoyer ’65, who had been wanting to give something back to her alma mater, attended the 2014 reading, and found inspiration for a gift to support poetry. Hoyer always had a love for poetry, and she started writing it after her retirement as a school counselor. Now she has a chapbook—Bits and Pieces Set Aside—and a forthcoming full-length collection, Imagine That, from FutureCycle Press to her name. Treseler described Hoyer as “a kind person and delightful friend” and expressed gratitude for her support of the reading series.

All told, the English Department has brought 14 nationally known or emerging poets to the Worcester State campus in less than ten years. Other poets who have read at Worcester State are Sandra Lim, Anna Ross, Marge Piercy, B. K. Fischer, Kevin Prufer, K. B. Kinkel Brinkmann, Jennifer Militello, Virginia Konchan, and Stephen Kuusisto. 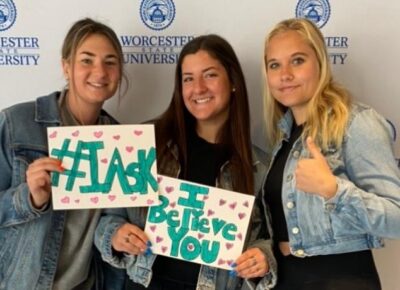