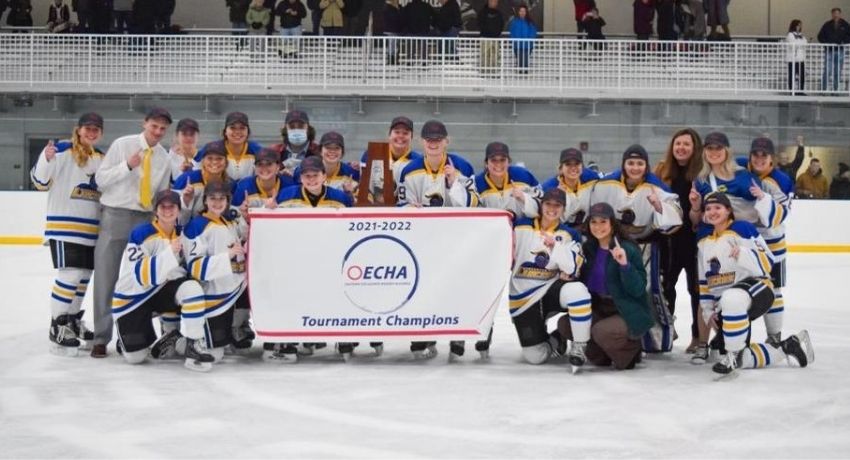 The top-seeded Lancers, who didn’t lose an ECHA game all season, emerge as the alliance’s first champion and finish their 2021-22 season with a 14-7-2 record, while second seeded Anna Maria ends the year at 7-12-2.

Pavoni’s game-winner, like all three goals in this game, came on the power play and was the result of hard work in front of the net. Clare Conway (Billerica, Mass.) picked up her second assist on the day and finishes the year as the team’s scoring leader with 19 goals and 15 assists for 34 points.

Cassidhe Wozniak (Turners Falls, Mass.) opened the scoring at 12:32 of the first period when she capitalized on the first power play opportunity of the game for either team.

Wozniak took a feed from Conway and slipped the puck past junior Sam Dahill (Littleton, Mass.) for her 16th goal of the season.

Wozniak ends the season with 16 goals and 9 assists for 25 points, while Katie Puumala (Framingham, Mass.) earned 26 points on the season after her 16th helper on Pavoni’s goal.

Amber Lee (Nashua, N.H.) completes her season having played in every game in the Worcester State net. Like the Lancers, Lee is 14-7-2 for the season after making 26 stops to earn the victory, including several impressive saves on Amcats breakaway attempts.

Dahill had 46 saves for Anna Maria, who tied the game at 12:31 of the second period on a goal by Angelina Rodriguez (Corona, Calif.).

The Lancers complete their first season in program history with a 5-3-1 mark on the road, and now, a conference championship.

The 18th annual ArtsWorcester College Show, a juried exhibition showcasing "the next generation of regional artists," has opened in an online, accessible format featuring work by three Worcester . . .