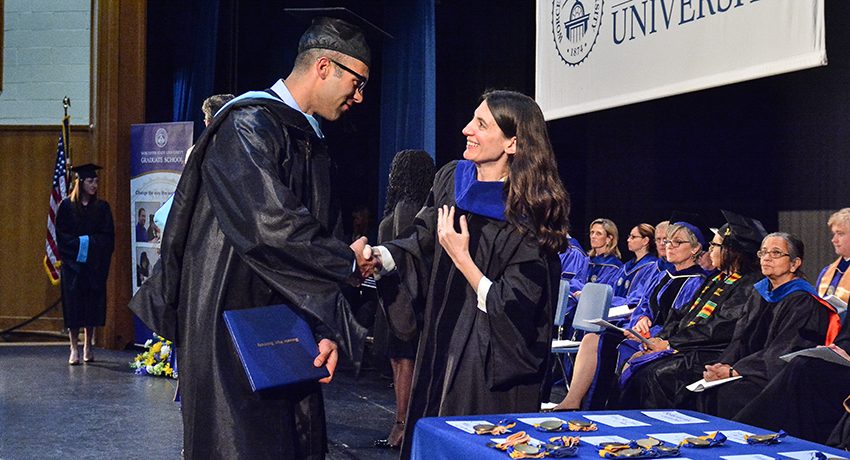 With the sound of bagpipes filling the air, almost 200 candidates for graduate degrees in fields as diverse as biotechnology and elementary education filled the Sullivan Auditorium with their families and fellow graduates on Friday, May 12, following a tradition that began in 1974 with the establishment of the Graduate School at Worcester State University.

Dean of the School of Humanities and Social Sciences Russ Pottle, Ph.D., delivered the keynote address, focusing on the sacrifice graduates made to achieve their academic goals as well as the value of the advanced degrees they have earned.

Deborah Hall, who was receiving her master’s degree in nonprofit management, was the student speaker.

Albro conferred the degrees, and each graduate stepped across the stage to shake hands with President Maloney, who presented the degrees. Graduates were then hooded by the school deans and graduate program coordinators.

Sullivan Auditorium was at capacity with the families of the graduates, ready to congratulate them on their academic achievement. After the recessional, faculty, administrators, graduates, and their families celebrated at a reception in the May Street Building. 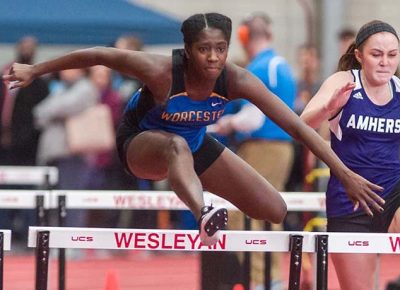 President Barry Maloney, on the behalf of Worcester State University, has recently signed his name onto the National College Athletics Association presidential pledge to promote diversity and gender . . .