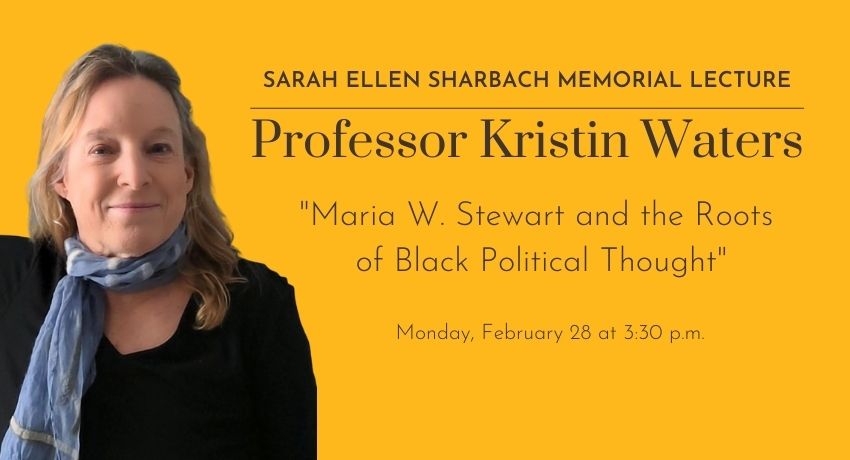 In her new book, Maria W. Stewart and the Roots of Black Political Thought, Professor Emerita Kristin Waters tells a crucial, almost-forgotten story of African Americans of early nineteenth-century America. In this work of recovery, Waters examines the roots of Black political activism through the story of Maria W. Stewart, a remarkable but largely unheralded woman and pioneering public intellectual.

Professor Waters will discuss her new book as the featured speaker in this year’s hybrid Sarah Ellen Sharbach Memorial Lecture on Monday, Feb 28 at 3:30 p.m. in the Blue Lounge or via Zoom: https://worcester.zoom.us/s/98125780967

Congratulations on this book, Professor Waters. The years of research, scholarship, and care you devoted to this book are apparent. How did you come to be interested in Maria W. Stewart? 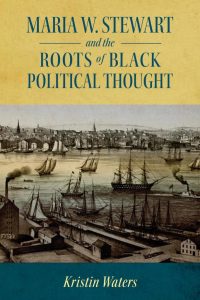 ​​As an undergraduate and graduate student, I landed three academic degrees having learned almost nothing about women or people of color in history, the arts, philosophy, and so on. Thanks to the Women’s Studies movement (as we called it then) I became keenly interested in learning about the lives and accomplishments of those whose stories had been hidden. This brought me to a book, Maria W. Stewart: The First Black Woman Political Theorist, by Marilyn Richardson, a book about an African American woman who wrote important essays on black civil rights and women’s rights in the 1830s. I devoured that book and have been writing about Stewart ever since. She appears in all three of my published books.

This book feels very timely and significant both as part of Black History Month and more broadly in a time when this country is reckoning with the historical erasure of Black leaders and their creative, scientific and intellectual contributions. You use the powerful term epistemicide. Can you talk about how this work makes a contribution toward restoring the historical record and what more needs to happen in this space?

Epistemicide, like homicide, is about deliberately obliterating something, in this case, knowledge (from the Greek, episteme) of the accomplishments of certain people for political reasons. As the title tells us, this book is not just about Stewart but also about the roots of black political thought.

So until now you may never have heard of Maria Stewart, the Reverend Thomas Paul, or the abolitionist David Walker. Why is that? You know about Washington, Jefferson, Madison, maybe even Patrick Henry or John Hancock. Yet, when Maria Miller arrived in Boston, there was already a long line of accomplished African Americans: Prince Hall, a formerly enslaved man who with his comrades agitated fiercely for Black rights and formed the first Black Masonic Order. Paul Cuffe, a wealthy shipping magnate, Phillis Wheatley, an internationally revered poet, and Elizabeth Freeman who had successfully fought for her freedom in the courts

If you were raised in Massachusetts you might have heard of Crispus Attucks, the first casualty of the Revolutionary War who was killed in the Boston Massacre, but probably not about Peter Salem who wounded a British general at Bunker Hill thereby allowing the retreat that saved the day. There was soon a Black newspaper, Freedom’s Journal, a civil rights organization, the Massachusetts General Colored Association, abolitionist publishing, and women and men fighting daily for their rights. My contribution is just one small part of reclaiming this important history.

Note that the erasure of these important historical figures is nearly complete. And now over 100 bills have been either introduced or passed in state legislatures banning teachers from teaching about racism. Are we moving in the wrong direction?

Maria Stewart was a remarkable woman – to emerge from an early childhood as an orphan and indentured servant to becoming “America’s first black woman political writer.” What surprised you most as you dug into her life and her writing?

I was surprised that after writing her essays and delivering her speeches in Boston in her 20s she packed up and left for a teaching job in New York City and then, as the Civil War approached, she moved closer and closer to the danger of war – first to Baltimore and then to Washington, DC. She endured unbelievable hardships, but late in life she finally received her husband’s war pension and used those funds to republish the essays she had written forty years earlier.

So many of the great civil rights and human rights leaders throughout history have been people of faith, and that is also true of Maria. What was the relationship between her faith and her political thought?

She believed that racists would be condemned to the abyss for eternity, pure and simple. Her political thought informed her beliefs about redemption and punishment.

What do you feel was her most important and enduring idea as a political philosopher?

She was the most important advocate of a theory I call black radical or revolutionary liberalism, meaning the classic theory that fueled the American revolution. African Americans may have been denied an education, but they understood that the colonists were fighting for liberty and rights and wanted the same for themselves. They fully understood the hypocrisy of the so-called “founding fathers.”

Can you share a favorite passage from her writing?

“All the nations of the earth are crying out for liberty and equality. Away, away with tyranny and oppression! Shall Africa’s sons be silent any longer?” (Religion and the Pure Principles of Morality, 1831)

What do you want us all to know about Maria W. Stewart?

That she was one of the very first writers to express what we would now call feminism. She advocated for women, for women’s participation in public discourse, in business, in preaching, and for their safety from the predatory behaviors to which they were (and are) often subjected. Simply put, she was a brilliant theorist and activist, one who deserves widespread recognition. 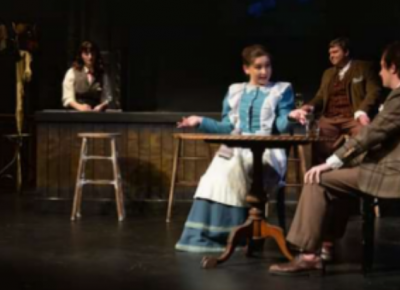 What would Picasso and Albert Einstein be wearing if they had a chance meeting in a Parisian café in 1904?  Bellalorraine Carey-Hicks, who graduated in December with a double major in English . . .