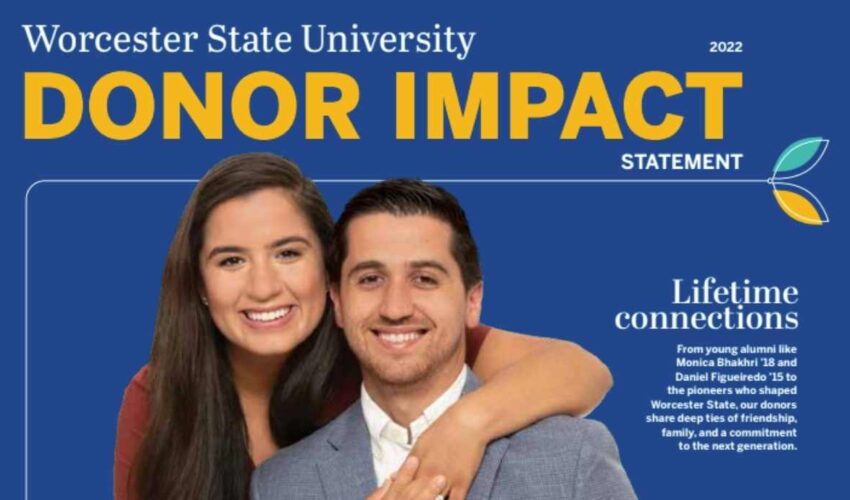 The University’s new Donor Impact Statement shares stories of friendship, mentorship and innovation from longtime donors, faculty, alumni and friends. The publication, produced annually by University Advancement to highlight the previous fiscal year of philanthropy, can now be read online.

“Worcester State is a uniquely special place,” Vice President Thomas McNamara ‘94 notes in his opening letter. “It truly is a family (not just because I also met my wife, Sherrie, a Worcester State alumna here almost 30 years ago!)….We connect with our donors on a deep level because we share the same goal, to help give our current students what we were once given. Opportunity. Inspiration. Roots and wings.”

The issue highlights how the Worcester State Foundation received $5.27 million in total donations from 3,217 donors, and was able to provide the University with nearly $2.1 million including $1.07 million in direct student support.

On the cover are recent Worcester State graduates Monica Bhakhri ‘18 and Daniel Figueiredo ‘15, who are helping students achieve their dreams, even as they pursue their own. Other features include alumna Diane Aramony’s establishment of an academic award to honor her first grade teacher Elaine (Curran) Cousineau ‘57, M.Ed. ‘60 and her husband Donald Cousineau ‘57, M.Ed. ‘60. The issue highlights the first recipient of the new Finish Line Fund, Cassandra Pierre ‘22 and reflections from faculty members who go above and beyond to support students.

Pioneering Worcester State donor Robert K. O’Brien reflects on his years of giving, and the many lives he has impacted, including Nick Monfreda ‘00, who received an O’Brien family scholarship as a student and went on to establish his own student scholarship. And, the issue features longtime donor and university leader David Bedard, who is the first donor to give through a Donor Advised Fund. 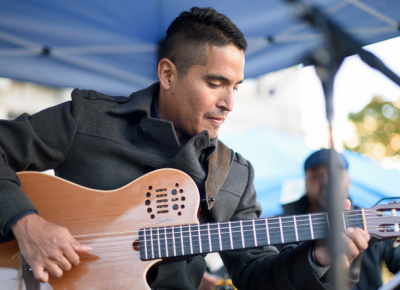 Carlos Odria nominated for BMA Latin Artist of the Year

Celebrated guitarist and Worcester State University Assistant Professor Carlos Odria is a nominee for this year’s Boston Music Awards Latin Artist of the Year. This marks the third nomination for . . .