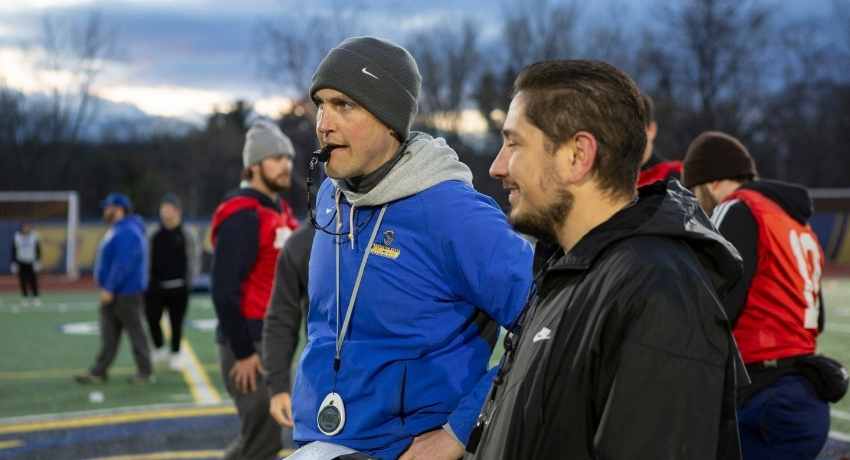 Number 20 was staring them in the face— and on Homecoming weekend no less. The Worcester State football team jogged to the locker room at halftime on September 18, 2021, trailing Fitchburg State 35-13 and facing down the potential of extending their winless streak to 20 games. Add in a 2020 season canceled by the COVID-19 pandemic, and it had been exactly three years and three days since the last Lancer gridiron victory.

“The mood was not good at halftime,” said Adam Peloquin ’12, MA ’14 who on that day was Interim Head Coach. “Our players knew they were better than how we played in the first half, and as coaches we just challenged them to play to their capabilities. All I asked of them was to have confidence in themselves and to take the game one play at a time.”

What followed that halftime speech was thirty minutes of possibly the best football ever played by a team wearing the royal blue and gold. The Lancers scored touchdowns on five straight possessions and forced the Falcons to punt five straight times. They outscored Fitchburg State 25-0 in the second half for a 38-35 victory, the first collegiate win for the majority of players on the field that day.

For Peloquin, that day was just the beginning.

“2021 was Year Zero,” he said. “Not many players knew what it took to win a college football game. Now we have a strong foundation and are preparing for 2022 with higher standards and loftier goals.”

The 2022 team has something else it has been lacking for several years – a head coach. After two years leading the Lancers, with the Interim tag, Peloquin was officially given the reins on Dec. 6, 2021. It’s a role that has enabled him to be more involved with every aspect and more available to each of his players. He hopes to rebuild this program one win at a time, and is using his own experience to fuel that process.

Peloquin was a three-year starter on the offensive line for the Lancers and he helped turn a one-win team into a post-season bowl participant in 2011. The circumstances parallel those of the current state of the program, and he hopes that so, too, will the results.

“The COVID pandemic has allowed us to start from scratch and create a very young team that is hungry to improve and compete with the top teams in New England. I hope my experiences helping to rebuild the team as a player will translate to the current players and will create sustainable success for Worcester State Football.”

He already sees some of the same resiliency and commitment that were key to his team’s turnaround a decade ago. Peloquin was named Interim Head Coach in November 2019 with the team already mired in a 17-game losing streak and morale waning. Then the pandemic struck and significantly reduced the program’s development. Players did not put on pads for nearly two years. Off the field, students were trying to navigate remote and hybrid learning and living through a pandemic.

“Yet these challenges did not diminish our players’ love for the game,” said Peloquin. “The team approached each day excited to be able to play football and to help rebuild this program into a champion. The resiliency and determination they have developed through the pandemic will serve the program well as we continue to improve.”

In 2021, the Lancers rostered 75 percent freshmen and sophomores and, as such, will return 19 starters to this year’s team. With an offseason of strength and conditioning under their belts, the Lancers enter 2022 more physically prepared to handle a college football schedule. An explosive offense and an overhauled defense should lead to more consistent and positive results.

Peloquin knows there are no easy games on their schedule. They head into Homecoming Weekend with two losses and one win under their belt. Worcester State will host UMass Dartmouth for Homecoming on Saturday, Sept. 24. The season finale is Nov. 12 at Framingham State. The Rams are the reigning MASCAC champions, but Peloquin hopes that on that day, the trophy will be on the bus with them, heading back to Worcester. 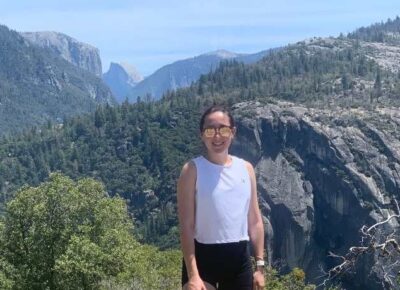 Each year, an SGA President is elected to work with members of the Student Senate and the Worcester State community to ensure that WSU is serving the needs of all its students. This year, Erica . . .