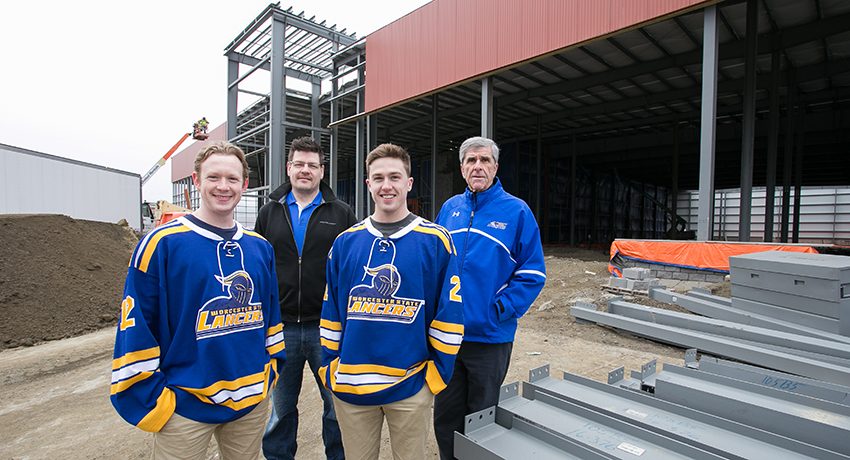 New Home for Men’s Ice Hockey Is a Game-Changer

For John Coughlin, associate head coach of Worcester State’s men’s hockey team, it was the missing link—or rather, rink—he needed to sell a top-level hockey program. After recruiting trips, the phone never used to ring much for him.

Then Coughlin started showing prospective players an artist’s rendering of the new Fidelity Bank Worcester Ice Center, where the team will play beginning in September.

“It’s amazing how he gets the callbacks now,” says Director of Athletics Michael Mudd. “For hockey, when you’re recruiting student-athletes, it definitely puts you behind the eight ball not having your own ice arena to call home.”

The change happened after WSU announced it had signed on to be an anchor tenant at the center as it was under construction in the heart of the Canal District in Worcester. It will house the WSU men’s hockey team for all home games and practices, as well as a give the team a permanent locker room.

Having home ice also will be nice for the general student population. Plans call for looking into the possibility of forming a women’s hockey team and other athletics offerings. “The hope is that eventually we can offer some intramurals and academic programming there as well; maybe later at night we could have an intramural hockey league or a broom ball league, figure skating, precision skating, you name it,” Mudd says.

The two-rink facility also will host Becker College, Worcester Academy, Worcester Junior Sharks, and Junior Crusaders, along with a couple of restaurants, a physical therapist, shops, and a professional skate sharpener. WSU will work as many activities as it can into the mix. “It’s going to be a busy facility, so if there’s enough ice, we are looking into offering all sorts of activities when possible,” Mudd says.

Another attractive lure for recruiting the best hockey talent is the new Wellness Center that opened on campus in September 2016. “I have families and kids coming through there on tours, and they say, ‘Can we take pictures?’ I say ‘OK, snap away,’” Coughlin says. “In terms of being able to condition the athletes and get them ready and prepared for play in the off-season and training in pre-season, we have a $53 million state-of-the-art workout facility.”

The hockey team has been practicing at a public rink in Auburn and playing home games at the College of the Holy Cross. “They practice in Auburn, and then for a game, they have to pack their equipment up and take it over to Holy Cross, where the locker room is not our own,” Mudd says. “It’s just move in, get dressed, play a game, shower, and move out. It is almost like an away game.”

The team’s new home is less than two miles from campus, which will cut down considerably on all the traveling and gear-hauling, as well as making it easier for the team’s fans. “The proximity is going to help,” Mudd says. “It’s a real short drive away, so it will allow the student body to come see more hockey games.”

Also, the team’s game times were not ideal because they had to play later at night. Most starts have been 8:30 or 9 p.m. because that’s when the ice was available. The new rink will allow more normal starting times of around 7 p.m. “That will help us to not only get more fans to the games, but it also will be better for the student-athletes themselves to get to bed earlier to get ready for the next school day,” Mudd says.

The move is such a big boost for the hockey team that players had a hard time believing it would actually happen.

“We heard about it last year, but, honestly, we just thought it was a rumor,” says junior Andrew Etheridge, who plays center for the team. “Then this year we heard the news, and we were all really excited about it.”

Etheridge says the team’s new rink situation will not only be more comfortable, it also will have a big impact on the game itself. “If you’ve done a bunch of drills there and you’ve played there all season, it just translates to the game,” he says. “Whereas, when you’re practicing at one rink and playing games at another, it’s kind of difficult. So we’re really looking forward to it.”

The team’s enthusiasm was on display last winter when its charter bus passed the under-construction rink on the way to a game in Fitchburg. “They were looking over to side the rink is on, and I could hear a little cheer going up on the bus,” Coughlin says.

The concept for the new ice facility had been kicking around for several years, Mudd says, and President Barry Maloney and other University officials have been involved from the beginning. So was Mudd, although he didn’t yet work at WSU. He was president of the Worcester Sharks, a pro hockey team that used to play in Worcester, when the rink idea first was floated about seven years ago.

“I remember the very first meeting about this arena that was hosted in the WBDC (Worcester Business Development Corporation) offices,” he says. “I was in a room with various local college administrators to discuss the potential of this facility being built. John Brissette, who was the head of the (WSU) Board of Trustees, was one of the people in the room. And I was actually representing the Worcester Sharks because we were going to manage the facility.”

But then the Sharks moved across the country to San Jose, Calif., home of their namesake National Hockey League team, and Mudd, as fate would have it, was hired as the new athletics director at WSU, where he continued to work with staff, athletes, and alumni to keep the dream of a home rink alive.

“We’ve had a number of alumni that have been behind us for a long time saying they’d be there to support us as this building comes to fruition,” he says.
Things shifted earlier this year when Cliff Rucker, the owner of the Worcester Railers pro hockey club, decided to put in the money needed to get the building done. “It had been simmering for a long time, and he was the one who came in at the eleventh hour to make it happen,” Mudd says. “I had gotten to know Cliff prior to that, and I reminded him that Worcester State very much wanted to be a part of the planning for this new building, and he’s been just great for us to deal with.”

The rink project also helps satisfy a longstanding request from the City of Worcester for the University to become more involved with the downtown area, which the Canal District abuts. “We are Worcester’s state university, and I think it’s pretty neat collaborating and being part of some of the development going on in the city of Worcester,” Mudd says.

For WSU, the rink will mean a big, long-awaited step forward. “It will give us a stronger sense of identity and belonging, which is the ingredient needed to improve the culture and get a winning tradition going,” says Coughlin, whose father, John Coughlin Sr., founded the hockey team at what was then Worcester State College in 1965. “It’s going to make all the difference in the world because the kids that we’re getting are coming from very established junior programs that already have this stuff, but we’ve gone without for many years.”

While waiting for rink plans to coalesce, other important elements needed for a competitive hockey program were quietly falling into place at WSU. Beneficial moves included hiring Mudd and Head Coach Shayne Toporowski, who played pro hockey for many years.

“The athletics director has really moved things forward for us,” Coughlin says. “And Shayne deserves a lot of credit for changing the culture over the last three years. He’s made a difference. He’s the real deal, and we have all been waiting patiently and hoping this rink would come to fruition. Now it finally has.”

Still, as the rink’s framework was being finished and the walls started to go up, Coughlin couldn’t resist checking on its progress. On Sunday mornings after church, he would sometimes get a cup of coffee to go and then drive to the construction site.

“I went by that facility when they had just cleared it, then two weeks later when you could see the beginnings of it taking shape and then two weeks later,” he says. “I get my coffee and sit there and I’m looking at that site and I’m saying, ‘This is really going to happen.’”
It sounds almost like he had to pinch himself.

“For you to say that, then I’ve painted a very clear and accurate picture,” he says.

This story first appeared in the spring 2017 issue of the Worcester State Magazine. 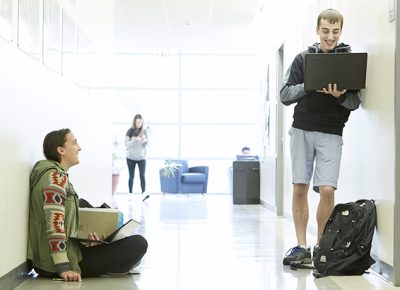 Worcester State University was recognized over the past week by The Princeton Review as one of the best 229 colleges in the Northeast region of the U.S. for 2018. The University is one of only three . . .