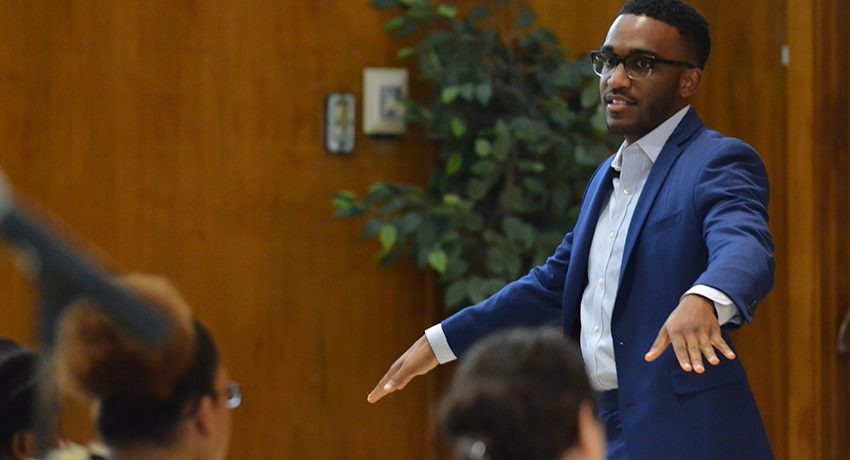 Activist and author Nyle Fort visited Worcester State University on Wednesday, February 21 to talk with students, faculty, and staff, and to initiate what seems impossible in these days of a hostile political climate: an open conversation about race.

“Everybody has different experiences, but I want us to do our best today to create a space where we can have a conversation that is full of respect and decency,” he said. “Just because someone has a differing opinion from you doesn’t mean they’re necessarily a terrible person.”

An activist committed to global transformative justice, Fort brings his national experience and international lens to his local work in Newark, N.J. In 2014, he traveled to Ferguson, Missouri to help build the Movement for Black Lives. Upon his return home, he created “7 Last Words: Strange Fruit Speaks,” a liturgy commemorating the last words of black people killed by police and vigilantes.

Fort’s writings are featured in several academic presses including Harvard Journal of African American Public Policy and Socialism and Democracy as well as various popular media outlets including The Guardian, Huffington Post, and The Root, where he made its 2015 “100” list alongside Kendrick Lamar and Ta-nehisi Coates. He is currently a doctoral student in religion and African American studies at Princeton University, a world away from the poverty and crime of his home in Newark.

“I go to Princeton and commute from Newark, and very regularly, when I go home to my apartment, I see young people who look like me who don’t get to go to Princeton, because I got lucky,” he said. “They’re stuck in that neighborhood, and it’s easier for them to get a job than an education.”

Fort noted that, unlike Newark, he rarely saw Princeton students being stopped and frisked by police, or cops raiding frat parties held at the Ivy League institution.

“Many of these kids—the sons and daughters of doctors and lawyers—they never have to worry about being approached by the police,” he said, relating the disparity to his belief that racism in America is not explicit, but subtly implicit and embedded into every institution of the country.

“Oftentimes when we think about race and racism in this country, we think about very extreme examples, and it’s usually how we are taught in our public schools,” said Fort. “The KKK, nooses, conversations around the ‘n-word,’ very extreme cases which I call symbols. But racism is systemic, a system of injustice, not just random acts.”

It is why he continues to encourage conversations about race in America, though it may cause some people discomfort. However, he said, it is important to discuss all aspects of racism and how it impacts all Americans.

“When we look at every major institution in the United States of America, it is deeply racialized,” he said. “Even something like the concept of suburbs and ghettos are not based on individual choices… No one wants to live in a ghetto.”

“When you look at our criminal justice system, you’ll see the U.S. incarcerates more human beings than any other nation in human history, and we call ourselves the land of the free,” Fort said.

Yet statistics have shown that blacks and whites commit crimes at the same rates in this country, leading Fort to ask: How do we have black Americans represented at far greater numbers in our prison systems?

“Most people think about police brutality, because that’s what they see on T.V., and it is a problem, but we also have to pay attention to mass incarceration because hardly anyone is talking about it,” he said.

Fort also led a group discussion after the talk to address questions and brainstorm ideas with students on how participate in activist groups on campus and to educate others on the negative effects that racism has on all Americans.

“When we talk about race, everybody has different opinions,” he said. “It’s like when you start working out at the gym. It’s really agonizing at first, but once you hit that stride, it gets easier. So from the jump, you have to be uncomfortable in order to grow.”

Fort’s visit was sponsored by WSU’s Office of Student Involvement and Leadership Development as part of its Diversity Lecture Series. It was co-sponsored by the Provost’s, International Programs, and Multicultural Affairs Offices, the Global Studies and Ethnic Studies programs, the English Department, and the Third World Alliance student organization. 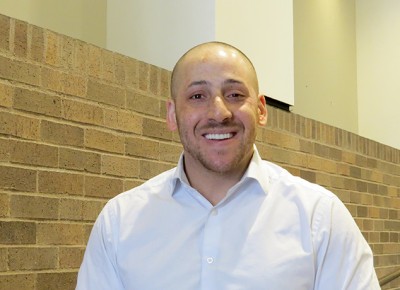 San Francisco native Kevin Hines began his talk in Worcester State University’s Blue Lounge on Wednesday, February 15 by asking his audience to observe a moment of silence for those who have . . .