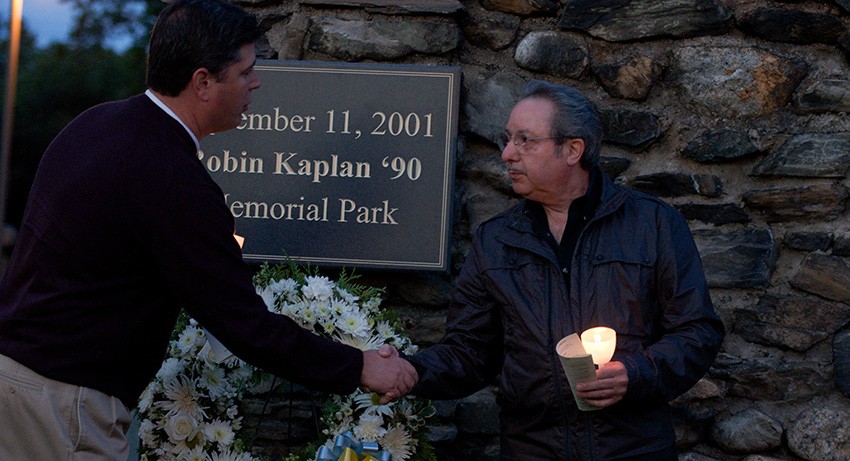 More than 300 Worcester State University students, employees, and guests attended a series of events commemorating the 10th anniversary of 9/11 on Sunday, September 11 and Monday, September 12. “Then and Now: WSU Remembers” events featured a candlelight vigil, photo display, flag raising ceremony, moment of silence, and theatrical reading of “The Guys,” a movie based on the true story of a fire captain who lost eight men in the collapse of the World Trade Center.

“It was an incredibly meaningful experience for our campus and the greater community,” said WSU President Barry Maloney. “It was an honor to welcome Ed Kaplan to our campus for a moving ceremony honoring his daughter Robin, who was tragically lost ten years ago.”

President Maloney and Ed Kaplan placed a wreath in Robin’s memory in the Robin Kaplan Memorial Park at the close of the candlelight vigil.

Robin Kaplan, a member of the Class of 1990, was tragically killed when her American Airlines Flight 11 was hijacked by terrorists and used to crash into the World Trade Center on September 11, 2001. The TJX/Robin Kaplan Scholarship at WSU honors her memory.

Growing up in Framingham, Kaplan won the admiration of her teachers at Juniper Hills Elementary School, Cameron Middle School, Framingham North High School, and Worcester State University, where she majored in psychology.

In remarks prior to placement of a wreath in the Robin Kaplan Memorial Park, Vice President of Institutional Advancement Thomas McNamara urged attendees to honor Robin’s memory by emulating her qualities. “I ask that we all choose to follow in Robin’s footsteps, to be loving, genuine, and caring people toward all others,” he said.

The vigil featured “Voices of Hope” from students Abigail Chmielecki (2012), Patrick Hare (2012), Colleen McKenna (2013), and Ashley Taylor (2012). Vice President of Student Affairs Dr. Sibyl Brownlee read the poem “I Rise,” which she had previously shared with the campus and greater community 10 years ago, following the tragic events of September 11th.

In addition to a viewing of the documentary “9/11,” attendees viewed a photo gallery prepared by Taylor.

Monday morning, following a moment of silence, the campus and greater community observed a flag raising ceremony performed by WSU student veterans and the Consortium Color Guard. WSU student veterans Mark Bastien, Dan O’Gorman, Alex Inman, and David Tyo, were joined by John Croteau, Rebecca Crupi, and Hannah Hodsden in raising the flag which Bastien had received from Massachusetts Senator Stephen Brewer, which had been flown over his base in Afghanistan. Greg Overton, also of the Consortium Color Guard, prepared for the flag raising, but could not attend due to his class schedule.

“It was such an honor to recognize the service of these outstanding student veterans,” Maloney said.. “It was particularly meaningful to be raising a flag of such significance. This flag will have a permanent place of honor on our campus.”

Ramos, once again, provided bagpipes for the flag raising and McKenna sang the national anthem. 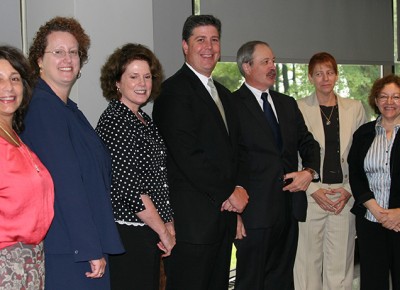 Worcester State University has secured a $233,417 Vision Project Performance Grant from the Commonwealth of Massachusetts. It was the largest grant awarded under the Vision Project initiative. The . . .