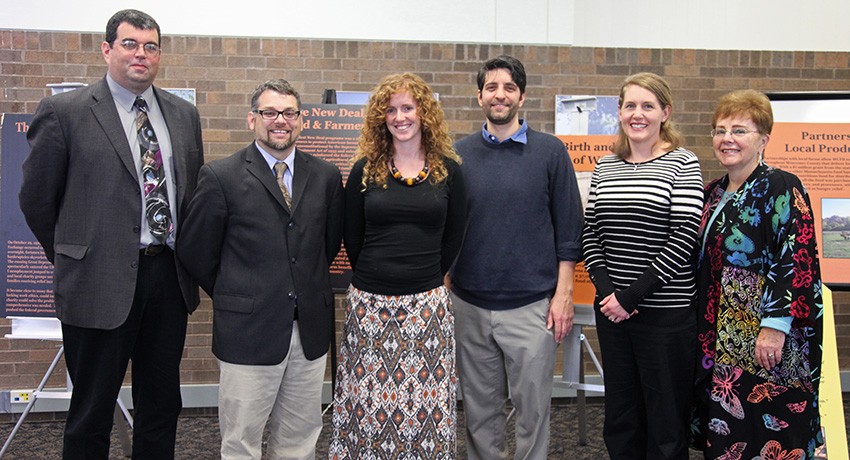 Six panelists addressed the forum’s title “Who’s Hungry?” by reviewing the history of hunger in Worcester and strategies used to end hunger. Behind the speakers were posters from Worcester Historical Museum’s Got Food? exhibit. Professor of Urban Studies Maureen Power, Ph.D., who is the executive director of the Intergenerational Urban Institute (IUI), began the discussion by offering many facts about hunger, including that 660,000 Massachusetts residents are chronically hungry, a 20 percent increase from last year.

Assistant Professor of Urban Studies Tom Conroy, Ph.D., covered the early history of hunger in the 1600s to early 1900s. Hunger has been a long and reoccurring issue in history, leading the early settlers in New England to carry over the English Heritage Laws that provided a community focus on hunger issues, he explained. “The solution to hunger is making communities responsible for taking care of their own,” he said.

Professor of Urban Studies Steve Corey, Ph.D., discussed food distribution changes with the emergence of the Industrial Era. Millions of immigrants migrated into the cities, which caused a significant loss of agrarian ways of life. This shift led to a dependency on the marketplace as opposed to farms for sources of food. The Industrial Era created a booming and bursting economic cycle, correlating with increased poverty of residents. “The poverty forced the community to create scientific charities; the charity followed a business model where resources were pooled together, essentially forming community gardens,” he said.

Power discussed the mindset of “I work hard, why don’t they?” that so many people hold when hunger is discussed. In actuality, she said, the majority of families that are hungry in Massachusetts are two-income families. “The system is not working. Rather than pointing fingers, we (should) stop and say, ‘Wow, we need an overhaul of the current system,'” she said. Presidents Franklin Delano Roosevelt and John F. Kennedy discovered that the system was not working, and their presidencies resulted in the formation of new programs, frameworks focused on community, such as social security and food stamps.

Kristin Bafaro, executive director of the Community Harvest Project, explained that her organization takes an initiative approach to provide fresh fruits and vegetables to the Worcester Food Bank. The organization uses volunteers to grow the vegetables and fruits. “Volunteers get a hands-on experience in farming,” she said. So far, about 86,000 people and 150 pantries have been served, she added.

Elizabeth Sheehan Castro, project manager for the Worcester County Food Bank’s Hunger Free & Healthy Project, spoke about how it addresses the systemic problem of the food system, from production to processing to consumption to disposal. “Hunger is not due to lack of food, but lack of access to food. Food is more than abundant,” she said. The program is a five-year project that formed from researching where people get their food and determining that schools are the greatest provider of food to children. This led to the creation of “universal breakfast” programs and school gardens in over 16 schools were poverty is the highest. The food bank also provides many services, from helping people apply for SNAP to participating in farmers’ markets to offering cooking classes to policy advocacy.

Steve Fischer, executive director of the Regional Environment Council of Worcester, reviewed the ways the organization has been building healthy, sustainable and just communities for 40 years. It has an UGROW initiative (Urban Garden Resources of Worcester) that enables residents of Worcester to have access to healthy and fresh foods through 52 community gardens. “Access to healthy food is a universal right,” he said. Their second initiative is YouthGROW (Youth Growing and Raising Organics in Worcester), which began in 2003. YouthGROW is based on an empowerment model, employing roughly 40-50 urban youth to grow fresh vegetables and fruits. The foods grown go to three places: home with the youth, donated to food banks, and sold at famers’ markets. The sales proceeds fund the program. The council also works to bring farmers’ markets to urban areas and participates in the Share Our Strength’s Cooking Matters program. It is developing the concept of creating mobile farmers’ markets.

Society is made aware of domestic violence, typically, through stories of a murder at the hands of the abuser. But domestic violence is far more complex than a "punch;" it can be sexual, . . .