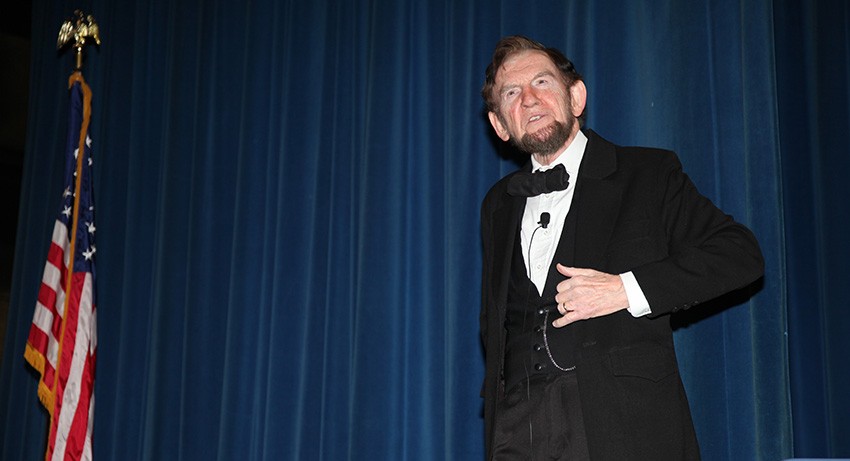 In his performances as Abraham Lincoln, actor Jim Getty described Lincoln’s personal, education and political background, the political parties of the era, and his popular debates over slavery with Stephen Douglas on Wednesday, February 15.

Getty discussed how Lincoln was from a very poor family and often didn’t go to school, but he eventually became a lawyer and soon ran for Congress. Of the era’s three political parties–the Whigs, Democrats and Free Soilers–Lincoln was part of the Whigs, which were like our modern day Democrats. In 1854, the famous Lincoln-Douglas debates began. They originated from the heated political debate over extending slavery to the Northwest of the United States. Lincoln was against the extension while Douglas favored it. Lincoln believed that “all men should be free” and “all men are created equal.” The debates lasted up to three hours with a minimum of 4,000 people in attendance.

In 1854 the Republican Party was founded. It pulled together the Whigs and several other parties into one unified party that leaned abolitionist and opposed the expansion of slavery. It was the first time the Republicans ran against the Democrats. Missing from the performance were details of Lincoln’s run for the presidency, his presidency and Civil War. Getty briefly addressed the reason the confederate states seceded from the Union, how long the Civil War lasted, the number of lives lost, and the Emancipation Proclamation, which declared “that all persons held as slaves” within the rebellious states “are, and henceforward shall be free.”

The packed North/South Auditorium enthusiastically applauded at the close of Getty’s nighttime performance. More than 100 attended Getty’s first performance in the Sullivan Auditorium at 10 a.m. Getty also held a workshop for students and faculty in Eager Auditorium at 2 p.m. during which he described his research to develop his dramatic interpretation of Lincoln.

The “Abraham Lincoln” one-man play was part of the Department of History and Political Science’s multi-year commemoration of the 150th anniversary of the U.S. Civil War.

The Worcester State Foundation has expanded the scope of its Student Research Grant Fund to support graduate students as well as matriculated full- and part-time undergraduate students. The Research . . .