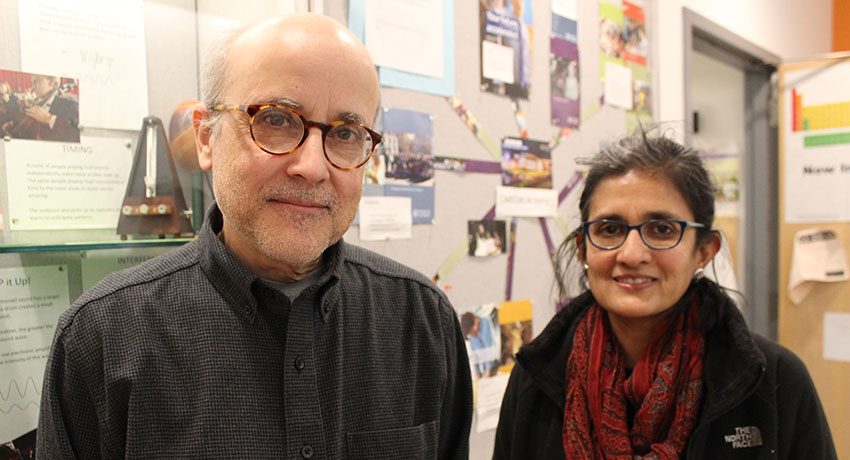 Associate Professor Francisco “Frank” Lamelas, Ph.D., and Professor Sudha Swaminathan, Ph.D., of the Earth, Environment, and Physics Department, have demonstrated in a laboratory how to pinpoint within a centimeter where a sound originates. An article about their research, which was done with an assist from two Worcester State students, was published recently in a prestigious scientific journal.

The article, “Laboratory Demonstration of Acoustic Source Localization in Two Dimensions,” appeared in the American Journal of Physics, a monthly, peer-reviewed journal published by the American Association of Physics Teachers and the American Institute of Physics.

The paper shows how an array of microphones can be used to locate an acoustic source with an accuracy of approximately one centimeter in a table-top laboratory setting, Lamelas says. The method is related to those used by law enforcement in the location of gunshots, and biologists in locating sea mammals or birds in three-dimensional spaces.

The specific spark for the research that led to the article was the so-called ShotSpotter system used by the Worcester Police Department. The system, with microphones set on trees, telephone poles and other spots, enables police at a monitoring station to listen for gunshots in other parts of the city and determine within a relatively small area where the shots likely originated. The system has been deployed in some higher crime areas.

“When we heard about that, we became interested in it, and we were curious whether we could reproduce something like that in a lab setting,” Lamelas says. “The idea is that if you have microphones set at particular points in space and a sound occurs—and in the city it would be a gunshot—but for us it was a sound created in a lab, and the question was whether we could figure out from which point the sound originated.”

Lamelas’ and Swaminathan’s research, assisted in its early stages by students Erin Hickey and Tommy Truong, is aimed at showing other educators how to teach the sound-location process to their students.

“This journal is for people who teach physics,” Swaminathan says. The article “is showing other physics professors that they can do this in a lab as an experiment. When you submit it to a journal like this, one of the things they’re interested in is ‘How reproducible it is?’ and ‘Is it useful for other professors to use it in their labs?’ This is something they could then teach it at different levels for different levels of students.”

The next step, Lamelas says, might be to try their method out in a more real-life type of situation.

“We have thought about doing it in the gym with a starter pistol or a cap gun or something,” he says. “It would be fun to do. It wouldn’t be good to the centimeter, but it might work in the gym as a demonstration.” 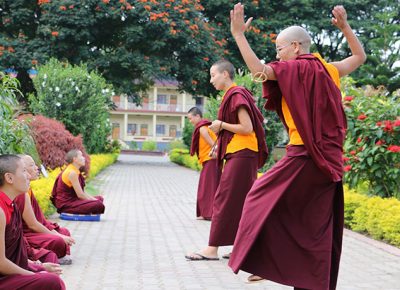 Worcester State students recently learned about Buddhism from masters of the ancient philosophy—four visiting scholars from the Namdroling Monastery in the settlement of Bylakuppe in South India. . . .