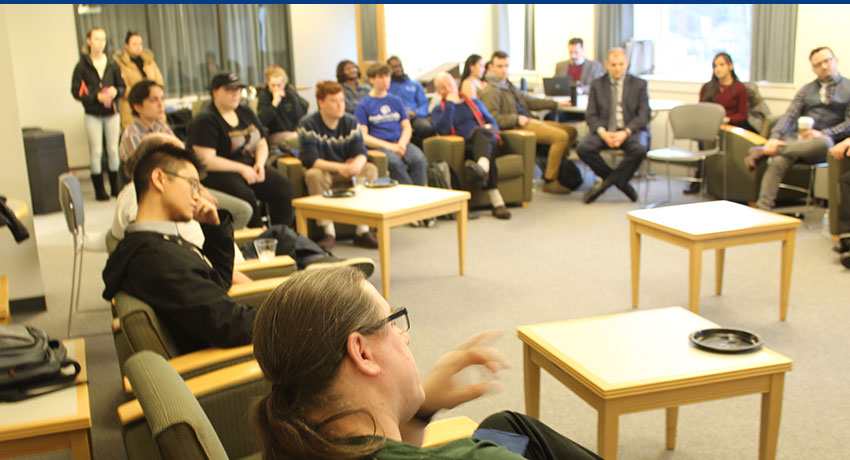 Are you Klobucurious about a Minnesota senator’s recent rise in the polls? Do you think Bernie Sanders is the Democratic Party’s best hope? Or its worst nightmare? Is there another candidate you particularly like—or dislike? Or are you maybe just feeling a little . . . hungry?

If you answered yes to any those questions, you might consider attending a series of informal gatherings that Anthony Dell’Aera, Ph.D., assistant professor of political science, regularly hosts.  Pizza & Politics is a relaxed forum where students, faculty, and other members of the WSU community can come together in a safe place, away from the formal trappings of a classroom, for conversations about politics, policy, and other issues of the day—with pizza available to anyone who attends.

A recent session focused on a day-after wrap-up of the New Hampshire primary. Upcoming, a Super Tuesday watch party will be held beginning at 7 p.m. on March 3 in the Lancer Loft, on the third floor of the Student Center. “It will probably run until about 10 p.m., or as long as attendees are able to stay,” Dell’Aera says. “And if people want to stay until the California polls close at 11, even better!”

The New Hampshire primary wrap attracted a crowd of about 35 people, including faculty, a WSU administrator, and students of all ages and political stripes. To kick things off, Dell’Aera asked the big question: “Who’s happy after last night?”

“Nope,” one student answered, definitively and right away.  “Yup,” another said, just as quickly.  Dell’Aera then turned to an Andrew Yang supporter who has been a regular Pizza & Politics attendee. “No ‘Math’ hat today?” he asked her. She expressed disappointment that her candidate had officially dropped out due to a poor New Hampshire showing but said she would still often wear her hat with “Math,” Yang’s branding catchword, written on it.  “I still want him in the conversation,” she said.

The focus of discussion was on Democratic politics because of all the primary-season activity. Overall, the “Vote Blue No Matter Who” crowd seemed to be the majority, and the “Bernie of Bust” people the minority, albeit a vocal one. The pros and cons of ranked-choice voting, where voters pick their first choice and then rank other candidates down the ballot in sequence with the ones they like better near the top, was also discussed. No clear consensus was reached and the subject likely will be brought up again at future gatherings. (A good explanation of ranked-choice voting can be found here.)

The New Hampshire wrap-up was the first time Austin Wong ’20 had attended a Pizza & Politics event. “I’ve always been interested in politics,” he said, when asked why he decided to come by. “I feel that right now the political climate in America is very tumultuous and I’ve been very jaded and very skeptical about it in recent years, so I thought it would be nice to hear what other people are thinking.”

Felipe Rodriguez ‘23 was another first-time attendee. “I participate in a lot of local politics in my hometown (Winchendon) and I thought it would be an interesting experience to see how a community that’s farther away and other students at my college feel about politics,” he said.

Did he find it to be different?

“There seems to be a lot more activism here versus Winchendon,” he said. “Any activism there is more centralized to the issues of the town and there’s not a lot of political discourse for things that are going on at the national level.”

Rodriguez sat next to his friend, Jordan Sibilia ‘21, who had recommended that he check out Pizza & Politics. “She was talking about it and it seemed really interesting so I thought I would stop by and see what it was about,” he said.

Sibilia said she invited Rodriguez because “I want everyone to get involved as much as possible. It’s really important especially around this time of year with the primaries.”  To her, “involvement” means face-to-face discussions and not just firing off your opinions on social media. “I’d like to see people getting involved in this type of way—in person and discussing things—instead of online,” she said.

Dell’Aera says the idea for Pizza & Politics came about after he arrived at Worcester State in the fall 2016 and discovered there was a desire for additional outlets for discussion about politics and policy, spanning global and national politics to campus life. “These gatherings started out as loosely structured conversations, but I soon realized that there was a real hunger among participants to engage with political figures as well, so our Pizza & Politics events expanded to include election events and participation in meet-and-greets with public officials and political candidates,” he said.

In partnership with Mark Wagner, Ph.D., director of the John J. Binienda Center for Civic Engagement, meet-and-greets with Democratic gubernatorial candidate Jay Gonzalez and Democratic gubernatorial candidate Bob Massey were held. Other events have included a forum for the Democratic candidates for lieutenant governor, assisting in organizing a widely covered debate between the candidates for Worcester County district attorney, organizing a debate on Massachusetts Ballot Question #1 regarding nurse staffing ratios, and a watch party for results of the previous federal election.

“There is a definite appetite for this kind of programming on campus, and we are fully engaged with the 2020 Election,” Dell’Aera said. “A strong group of interested students, faculty, and staff spanning the entire political spectrum has come together from across campus as a result of Pizza & Politics, and I am hopeful that they will pursue opportunities for political activism on and off campus.”

Dell’Area said he hopes Pizza & Politics will continue to grow and help make Worcester State a prime destination for candidates, debates, and political discourse. “I hope that these gatherings help members of our community to learn and practice civil discourse on issues they care about, and that even when we disagree with each other there are opportunities for growth when those differences are explored through free, open, and respectful conversations,” he said. “And maybe, just maybe, we might discover for ourselves that we have much more in common than we realize.” 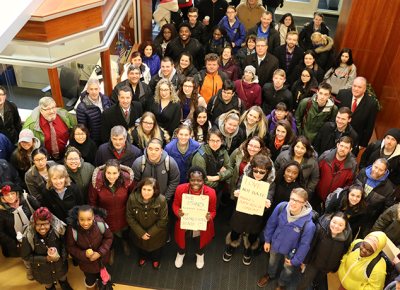 More than 500 members of the Worcester State community, including students, faculty, staff, and University leadership, participated in the Rally for Unity on Thursday, Feb. 13, showing  support for . . .