‘The Ladies’, as the evening’s guests referred to the half sized statues, are three earthen figures, from the 3rd century BC, in Puglia.  There are less than 100 are in existence, only nine in the U.S., and an exhibition of this material, which was organized by WAM’s Objects conservator Paula Artal- Isbrand, has never before been organized. These works have received the attention of specialists in the last couple of decades. On November 21, they received the attention of two of Worcester’s esteemed poets.

About thirty academics, poets and museum goers attended a reading in the museum café by Dr. Heather Treseler of Worcester State University and Dr. Jim Cocola of Worcester Polytechnic Institute.  The subject of their reading – “art inspired by art” – was a series of poems written in response to the exhibit Orantes, Ancient Statues from Southern Italy, currently on view until December 1 in the Jepson Ideas lab.

Introduced by WSU’s Dr. Mark Wagner, the Orantes Statues bring us face to face with what Zadie Smith called a persistent problem for artists: How do we face the realities of the cycle of life, for others and for ourselves? Cocola and Treseler read a series of poems that brought the audience to a new appreciation of how two art forms can come together to deepen our appreciation of our world — a world enhanced by smart phones and technology, yes, but also anchored by the ability of artists return us to a contemplation of the ages.

The Poets in the Galleries program is both an extension of the WSU- WAM partnership, and also a return to a tradition. Since 2001, poets and writers have been invited into the museum to respond to exhibitions using the ekphrasitic method, or, art inspired by art.  The fertile artistic grounds of the museum, in particular the Orantes statues, proved a rewarding milieu for the reflections of the poets, according to several attendees.  “We were reconnected with the origins of our shared roots,” says Wagner. 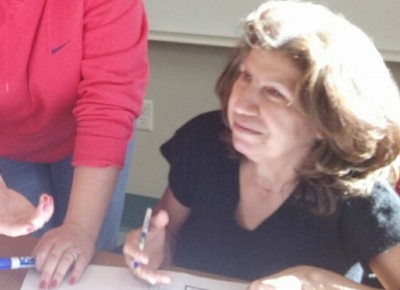 This semester, the Department of Urban Studies has added a location to its successful English Language Learner (ELL) Program: the Worcester Senior Center at 128 Providence Street. This site has . . .