At a June 16 meeting, the Board of Higher Education voted to approve a performance funding formula that will divvy up a portion of the nine state universities’ state funding based largely on the number and type of graduates they produce. The Department of Higher Education described it as “an effort to hold the state’s public colleges and universities more accountable for the number of students who successfully complete degree programs.”

“The state universities provide the best value proposition for a four-year degree in Massachusetts,” said Barry M. Maloney, president of Worcester State University and chair of the nine-university Council of Presidents.  “Performance-based funding recognizes the state universities’ progress in meeting the Commonwealth’s need for more college graduates and narrowing the achievement gaps certain populations experience.  In these ways and more, we are measuring up.  Recognizing performance well-done is important and can benefit students in the long-run when combined with adequate state appropriations.”

“This funding formula was developed at the direction of the Massachusetts legislature and with the close cooperation of and in consultation with the state university presidents,” said Richard M. Freeland, Commissioner of Higher Education.  “It will reward our public campuses for helping some of our neediest students earn their degrees, and it also will improve our ability to provide graduates who are ready for work in the knowledge-based industries that drive economic growth.”

The state university funding formula will be applied to $5.6 million expected to be allocated to the institutions in a new line item in the FY2016 budget.  The funding, which is separate from the base appropriation for individual campuses, will be distributed to campuses once the new state budget is approved.  It is based on a complex formula of metrics and weights developed by NCHEMS, the National Center for Higher Education Management Systems.  An institution’s share of the funding will be determined in part by its five-year graduation rates, annual headcount, full-time enrollment, year-over-year increases in degrees awarded, the numbers of students who reach 30 and 60 credit hours each year (with additional points awarded for low-income students who qualify for federal Pell grants), as well as numbers and types of degrees awarded (with additional points awarded for degrees in “priority fields” such as STEM, health, business, and education.)  Campuses are also awarded points for “degree productivity,” the cost of producing a degree per $100,000 in total revenue.  The metrics used in the formula align closely with the Vision Project, the BHE-approved strategic agenda for higher education. 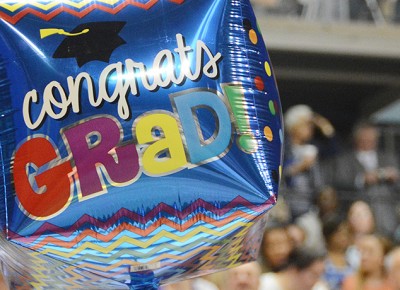 More than 1,100 undergraduate and 200 graduate students were eligible to graduate from Worcester State University in mid-May. Alumna Sheila Harrity, Ed.D., M.Ed. '93, the superintendent of . . .