After a thorough, six-month examination of our books and practices, the Office of the State Auditor has determined that Worcester State University has controls in place to ensure that expenditures are “reasonable and appropriate.” The audit included an examination of how we handle travel costs, consultant expenditures, and staff use of University credit cards. I’d like to congratulate all faculty and staff for engaging in careful stewardship of taxpayer and student dollars. I would also like to recognize the Administration and Finance staff for working diligently with the auditors to address their concerns during the six-month period, in addition to performing their regular job duties.

The auditors also determined that we are in compliance with Jeanne Clery Act disclosure and campus security policy rules and regulations. I’d like to recognize the leadership of our Student Affairs Division, particularly the University police department, which responded well to rapidly changing policies and procedures related to investigating, reporting, and responding to sexual assault incidents during a time when laws and rules were changing.

These critical areas – appropriate expenditures and Clery act compliance – were two of seven audited for the time period of July 1, 2012 through June 30, 2014. In four of the seven areas, the auditors determined we are fully compliant. In the other areas, the auditor’s office identified three practices that need to be addressed.

The way we inventory our property is an area of concern. I am working with our Vice President for Administration and Finance Kathy Eichelroth to implement a new process to ensure that all University property is accounted for. You may have already been contacted by someone from administrative services to inventory your office property. This is a critical first step.

The auditors also identified a need for improvement in how we report our financial data to the Office of the State Comptroller (OSC). While we have been reporting our data and it is accurate, it was noted that we should be filing summary accounts receivable reports with the OSC on a monthly and midyear basis. We are implementing this change.

Finally, the auditors also noted that they believe we did not adequately inform the Board of Trustees of a transfer of some strategic planning trust fund dollars – dollars that had been set aside for the last strategic plan, which concluded in FY14. While we do not feel that this criticism rises to the level of a finding, we will be sure to provide any re-allocation of funds to the Trustees in the format recommended by the auditors, going forward. 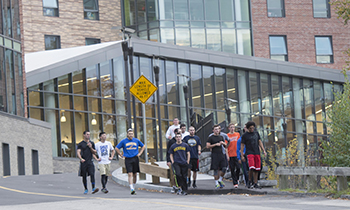 Many Groups and Students Keep Campus Active Over the Summer

For most students and faculty, summer is the most relaxing time of the year, but for two of Worcester State University’s administrative offices, it is one of the busiest times of the year. . . .