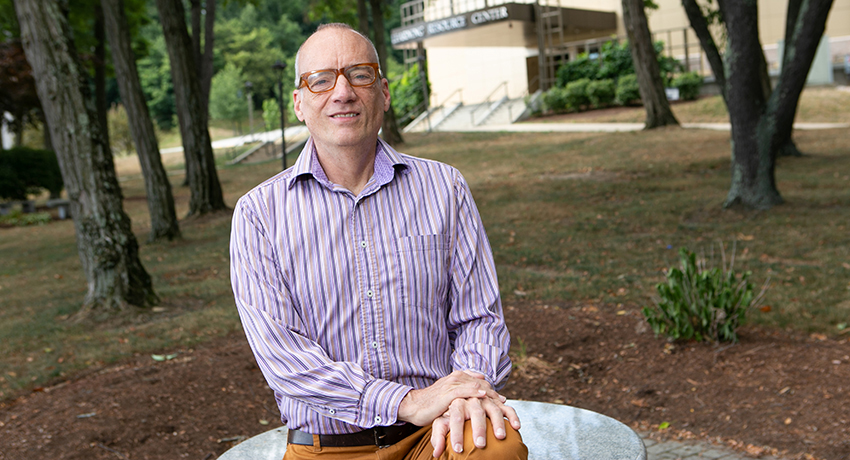 Robert Brooks, J.D., Ph.D., professor in the Criminal Justice Department at Worcester State, is an art collector, to the extent that he can afford that expensive avocation. Also, his grandmother was a painter, his aunt is a watercolorist, and his husband a graphic designer.

“So, I have an ongoing interest in art,” he says. “It kind of flows through my veins.”

Art is hardly his only interest, however.

Brooks has degrees in four different fields: an undergraduate degree in music management, a law degree, a master’s degree in clinical psychology, and a Ph.D. in sociology. “I just really like studying and writing about things that are at the junctions of two or more disciplines,” he says.

In keeping with two of his many interests, Brooks teaches a course titled Art Crimes. The catalog description says the course explores a variety of criminal offenses involving the production, consumption, distribution, and display of art, including graffiti/street art, forgery, theft, vandalism, rights infringement, and indecent and politically subversive art, all of it examined from an interdisciplinary perspective. The course is offered at least every three years and likely will be offered next in the fall 2021 semester.

Brooks became interested in the field after seeing the 2014 movie The Monuments Men, about a World War II Allied group that tried to save works of art before the Nazis could destroy them. “What I remember is that Hitler ordered the works of art destroyed if the Third Reich fell, and so the Allied forces were finding art buried in places like coal mines, castles, where it had been secreted away after it was stolen,” he says.

The film struck a chord with him and inspired him to study art thefts during wars and other crimes related to art. “It’s a study that involves a lot of different questions from the philosophical, to the aesthetic, to the criminological, to the political, to the economic, looking at art value,” he says. “It really digs into so many areas that crisscross and I find it fascinating.”

The course dispels some of the many popular misconceptions about art crimes, such as that they are always large-scale crimes that the FBI is involved in or that the thieves are somehow after the art for art’s sake, which is almost never the case.

“There’s this idea that the art thief is a debonair, suave man who loves art who steals for himself or a client who has similar refined tastes,” Brooks says. “But it’s actually mostly underworld figures. Syndicated crime is where you find the contemporary people behind big art thefts.”

Even the term “art thief” is misleading, Brooks says. “There’s nobody who just steals art,” he says. “It’s an occasional crime for people who do other crimes. It’s a form of currency with organized crime. They hold a painting in return for waiting for a cocaine shipment or whatever it is. It’s used in bargaining, as a kind of stock and trade, so art theft is not what it appears to be in the popular images.”
In real life, an art theft more likely involves one of tens of thousands of art objects that are stolen from homes, historical sites, and other places, although we seldom hear about those.  The FBI keeps a searchable database which records these multitudinous lesser losses.

“The FBI’s definition of art is very broad,” Brooks says. “It includes things like antiques, old coins, and musical instruments so there are many thousands of items. They are things like a pair of 18th century candlesticks which are not worth $50 million, but are valuable to the owner.”

It is highly unlikely that the owner will ever see those candlesticks again, he says. “It’s really interesting to search the database and see just how much has been stolen or reported as missing,” Brooks says. “And only about 10 percent of stolen art is ever recovered, which is a sad statistic.”

Another surprising statistic: At least one prominent expert believes that much of the art in museums is either forged or misattributed.

“Thomas Hoving, who was the head of the Metropolitan Museum of Art in New York for many years, wrote a memoir about his life in the art world,” Brooks says. “In it, he says he thinks that 40 percent of the art in museums is either forged or misattributed. In other words, we might say ‘this is by Raphael,’ but it’s really by one of his better students and has been attributed to Raphael.”

“It really developed in the ’80s and ’90s, where people coalesced around it as a multidisciplinary topic when, previously, scholars from all these different fields just weren’t talking to each other,” he says.

As a result, not much book-length scholarship has been written that presents a summary of the field. But Brooks is about to help fill that gap. He was recently offered a book contract from Edward Elgar, a noted UK-based publisher of academic books and journals.

“I was actually presenting at the American Society of Criminology conference, about teaching art crimes and how I developed the course,” Brooks says. “And an editor who had a booth at the conference said, ‘I see you’re presenting a paper about this. Can we talk about a book-length treatment of it?’ So, the field needs a book, and it seems I’ll be the person to do it.”

The book is slated for publication in September 2022. 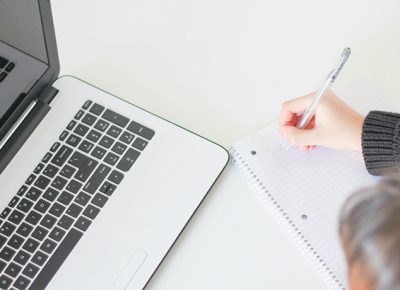 When Governor Charlie Baker called for closing state universities last March because of the pandemic, much consternation ensued as classes were suddenly switched to fully online. But seminars, . . .