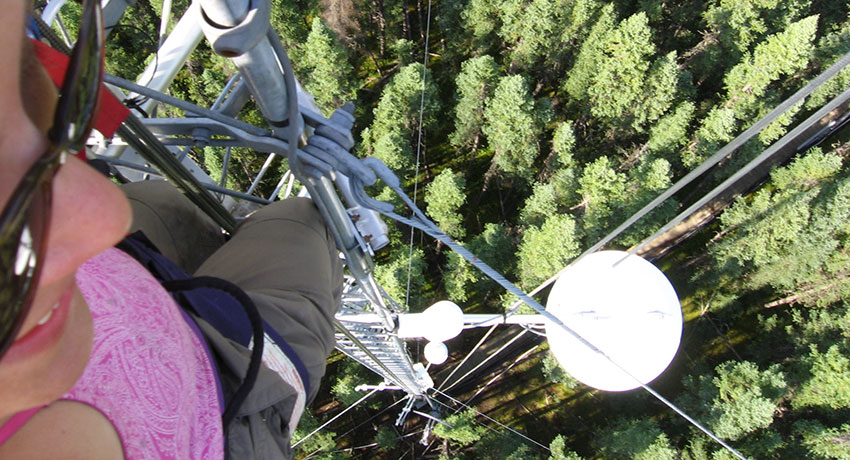 A recent paper on the impact of climate change on boreal forests highlights research by Professor Allison Dunn, Ph.D., of the Department of Earth, Environment, and Physics. Published in Nature Climate Change, the paper includes data collected as part of Dunn’s doctoral and post-doctoral work in Northern Manitoba, where she helped run one of the world’s longest-running field experiments studying how forests exchange carbon dioxide with the atmosphere.

The results from this study were combined with results from similar sites across the boreal biome in Canada, Alaska, Siberia, and Scandinavia, which Dunn says is a powerful approach.

“It lets scientists understand how this vast boreal region, on average, is responding to climate,” she says.

“The site was located in a remote area—five kilometers in the woods off a dirt road, and was accessible by snowmobile in the winter and ATV in the summer,” says Dunn. “The heart of the measurements was a 30-meter (100-ft)-tall research tower that I used to have to climb to maintain the scientific equipment at the top.”

Data was collected on a constant basis in order to accurately understand how Manitoba’s boreal forests responded to the environment, as well as to answer pressing questions about how the forests will change as the climate changes.

“The key finding based on our data is that boreal peatlands (essentially, boggy wetland areas) are at a high risk of drying under climate change, in large part because the mosses found in peatlands lose water much more easily than trees in a forest do,” says Dunn.

While the research site has been decommissioned since Dunn came to Worcester State—it cost hundreds of thousands of dollars to operate each year—the data collected continues to bear fruit.

“[The data] suggests that these peatlands will also be at higher risk of forest fire (common in the boreal region), which could cause them to release their carbon to the atmosphere as CO2,” says Dunn. “If this happens, it would amplify climate change, since CO2 is a greenhouse gas that warms the atmosphere.”

The paper, “Increasing contribution of peatlands to boreal evapotranspiration in a warming climate,” is available on the Nature Climate Change website. 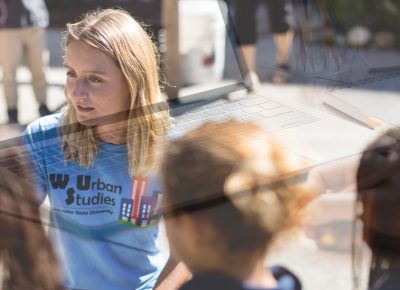 After almost two years of planning, Worcester State launched three online Master’s of Education programs on Monday, May 18, the first of several new online graduate programs planned over the next . . .