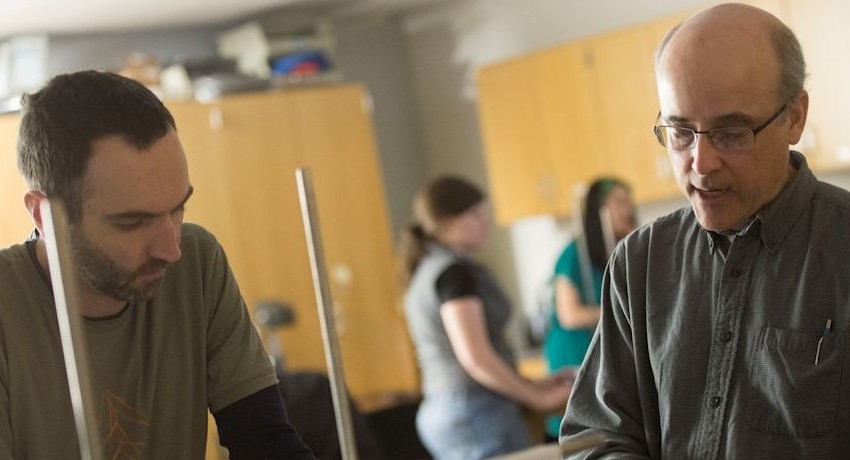 Ask Frank Lamelas, associate professor of Earth, Environment, and Physics, about his research lab, and he’ll quickly tell you that he has a “distributed research laboratory.” That’s because his lab is wherever he’s found space for it in the Ghosh Center for Science and Technology.

A spare desk in his office on the fourth floor of S&T is laden with pieces of equipment. “This is my electronics and soldering area,” he said. In a physics teaching lab a few doors away, he’s secured a corner for wet chemistry. Here, he makes solutions and stores chemicals he needs for research.

Down the hall, a room marked “Radiation Lab 423A” was a storage space that’s now Lamelas’ Crystal-Growth Research Lab. He’s studying epitaxial growth in crystals by examining their growth process in salt solutions, which are translucent and transparent, the better to observe them with a microscope. “If you want to study the growth process itself, this is a reasonable approach,” he said.

The equipment in this small room has come from a variety of sources.

“Some I’ve gotten from the department’s budget. Some I’ve scrounged from IT and other places. Some I’ve bought on e-Bay,” Lamelas says. “e-Bay is the world’s rummage sale. You can buy lots of stuff very cheaply.” He points out a $50 piece of equipment he found on e-Bay. On another counter is a green laser he bought directly from a Chinese manufacturer through a vendor in New Zealand.

“I wanted to get going on my research,” he explains. “e-Bay has made this possible. Setting up a lab like this wouldn’t have been possible 20 years ago.”

Lamelas also builds equipment for his studies of crystal growth at home in his basement. “This is a temperature stage,” he said, holding a device no bigger than the palm of his hand. The temperature stage is used to heat and cool samples with a precision of 0.01 degrees Celsius. Working full time to make the temperature stage might have taken him a week, he said. “It would probably cost $10,000 to buy one.”

His approach allows him to create custom-made experimental systems suitable for performing novel experiments in condensed-matter physics and materials science.

Currently two undergraduates work with him. Tom Bosse, a natural science student, is developing programming to raise and lower temperatures for some of the crystal growth experiments. Deanna Lahey, a biology student, prepares samples and monitors data the experiments generate.

Lamelas bought materials with his WSC mini-grant to create a moissanite-anvil pressure cell, which is used to study crystal growth at higher pressures than atmospheric pressure. In trial runs, the cell easily reached pressures of approximately 30,000 atmospheres.

His mini-grant project, “Raman Spectroscopy at High Pressure,” also involves cameras and two spectrometers. These, plus the laser and other components, are part of an optical system designed to allow simultaneous measure of pressure and Raman spectra with samples that can be heated or cooled.

The spectrometer enclosures he bought on e-Bay. Isn’t it tough to get the college to pay for such e-Bay purchases? “I do this out of pocket,” Lamelas said, “because I want to do it.”