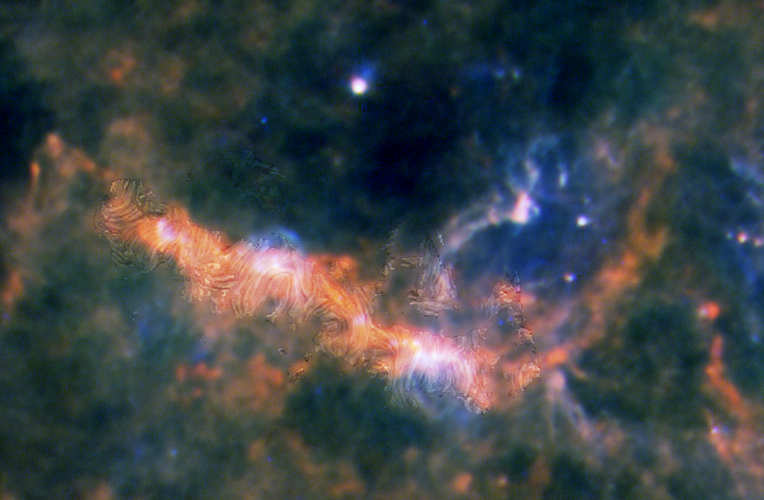 Professor makes breakthrough discovery about the magnetic fields of stars

His recent discovery revealed that the Milky Way’s magnetic fields are far more complex than previously thought. His findings – published in TheAstrophysical Journal Letters  – have been making headlines across the scientific world. 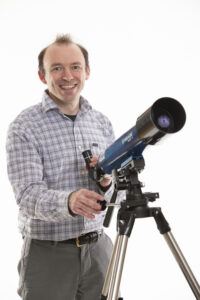 Stephens used a unique telescope constructed by NASA and German Aerospace Center (DLR) called SOFIA. The telescope is on a specially outfitted Boeing 747 airplane that flies above much of the atmosphere and so can make clearer observations in the infrared spectrum, which can reveal important aspects of astronomy beyond the scope of visible light.

Scientists know that most stars form within a galaxy’s spiral arms. Building the spinal ‘skeletons’ of spiral galaxies are galactic ‘bones,’ long filaments that outline the densest parts of the galaxy’s arms.

But what exactly is a galactic ‘bone’?

Our bones indicate the densest parts of the human body. As such, a galactic bone indicates the densest part of the Milky Way Galaxy. These are long, filamentary structures of molecular gas that are typically over 50 light years in length but are only about three light years in diameter. They are currently collapsing and becoming denser to form thousands if not tens of thousands of stars.

Magnetic fields are an important aspect of astronomy. Magnetic fields produce forces on charged particles. As such, magnetic fields can guide flows of matter, and they can actually help provide support against collapse due to gravity.

Previously, it had been assumed that the magnetic fields surrounding the galactic bones aligned with the swirls of the galaxy’s spiral arms that the bones are part of, but Stephens’ observations revealed them to have a complex structure when observed in finer detail.

“I was surprised by how complex the magnetic fields were,” Stephens says. “I expected the fields to be primarily perpendicular or parallel to the longest axis of the bone as predicted by most of the theoretical models. However, they were oriented in almost every way possible while still maintaining significant structure.”

It will take a lot more analysis to fully understand exactly what role the fields play, but Stephens says his current calculations indicate that the fields are quite strong and significantly slow down the formation of stars in these bones.

“Magnetic fields can slow the collapse of stars, and thus can potentially set the rate at which stars form in a cloud,” he says. “They can also guide the flow of gas, shape the bones, and affect the quantity and size of the densest pockets of gas that will eventually collapse to form stars.”

SOFIA, or the Strategic Observatory for Infrared Astronomy, is currently the only telescope in the world that can make observations in the far-infrared.  This is important, Stephens says, because some astronomical sources are better studied at different wavelengths. Star-forming regions, for example, are the brightest in the far-infrared, so it is easiest to observe them at these wavelengths.

Unfortunately, for astronomers wanting to peer into these star-forming regions, our atmosphere blocks almost all light in the far-infrared. “So, we need to either fly above the atmosphere on an airplane or launch something in space,” Stephens says.

Stephens’ project, called FIELDMAPS, or the FIlaments Extremely Long and Dark: a Magnetic Polarization Survey, is the first project to map any galactic bone in its entirety. Of the ten studies of bones planned, the first one analyzed was that of G47, a giant filamentary bone within the Milky Way that is 200 light years in length and 5 light years in width. It is located approximately 20,000 light years from Earth.

“By mapping the orientation of the fields in the bones, we can estimate the relative importance of the magnetic field to that of gravity to quantify how much magnetic fields affect the star formation process.”

Stephens did not fly on SOFIA for his project but sent a detailed ‘script’ to the airplane’s astronomy crew stating which observations to make. Extensive research helped Stephens write the script pinpointing exactly where to look within the vastness of space.

In the field of astrophysics, Stephens is a star. He has published several research papers and he studies the formation of stars and planets using premier telescopes such as SOFIA and ALMA, or Atacama Large Millimeter Array, a high-altitude observatory in the Atacama Desert of Northern Chile.

Stephens came to Worcester State three years ago from the Center for Astrophysics | Harvard & Smithsonian in Cambridge, where he was a postdoctoral fellow.  A native of Wichita Falls, Texas, he received an undergraduate degree in electrical engineering from the Georgia Institute of Technology and a Ph.D. in astronomy from the University of Illinois.

As the FIELDMAPS project continues, it will unlock more secrets of star formation.  “Gas collects in the spiral arms in galaxies before stars form,” Stephens says. “FIELDMAPS will give us a statistical look at how magnetic fields affect the collection of gas, which can in turn be compared to simulations we have done on galaxy formation. Together, they will help us understand what governs the rate of star formation within our galaxy.”

Photo credit: The G47 bone, where the color-scale shows the bone as mapped by Herschel, and the wavy pattern shows the direction of the magnetic field as imaged by the SOFIA telescope. (Color-scale: ESA/Herschel/PACS/SPIRE/Ke Wang et al. 2015; Polarization map: Stephens et al., 2022) 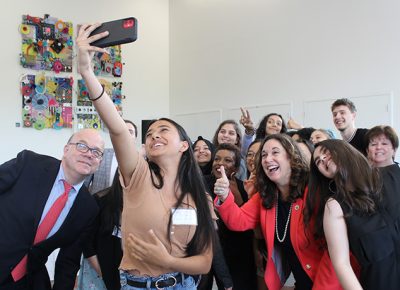 When Angelina DeFeudis first entered North High School as a freshman, she never thought that attending college would be possible for her.  Nonetheless, the head guidance counselor asked her to . . .