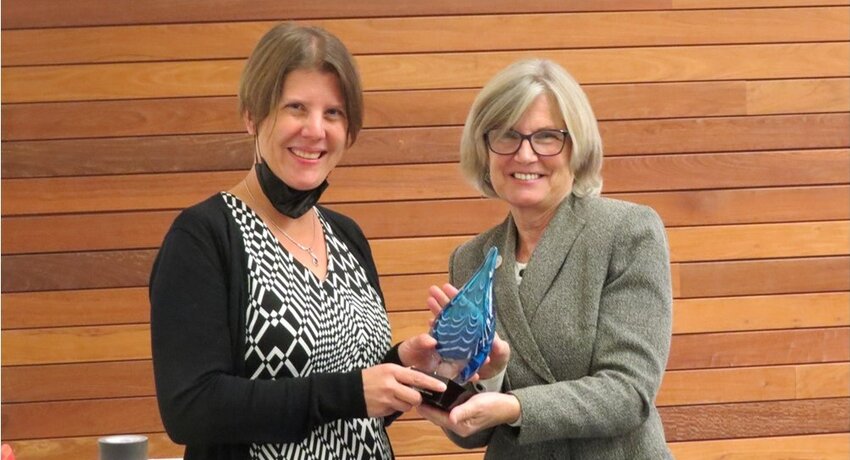 Professors Champika K. Soysa, Ph.D., and Allison Dunn, Ph.D, were recognized for their contributions in their fields at Worcester State University’s third annual Dean’s Lectures awards. Both professors presented lectures on their research at a ceremony held on November 8.

Provost and Vice President for Academic Affairs Lois Wims said, “We brought this award to Worcester State University to recognize the scholarly and creative bodies of work of our distinguished senior faculty, beginning in 2019. This year, our honorees held audiences spellbound with the implications of their work with disaster stressors and climate impacts on forests.”

Attendees gathered in Sheehan Hall for a short reception followed by the presentations and a question-and-answer session.

Professor Soysa, who attended the event virtually, presented an overview of her research on the impact of the 25-year ethnic conflict in Sri Lanka on children in poor rural villages. This research took Soysa to areas with landmines and overhead artillery exchanges, but it was the only way, she said, of telling the untold stories of these children.

Soysa assessed the coping strategies and resilience of the children there. What she found was that the children had “maxed out” on their coping abilities. Their post-traumatic stress disorder (PTSD) symptoms consisted mainly of reexperiencing their trauma in play or dreams, followed by being in a state of hyper-arousal, that is, feeling anxious and hyper-alert even in safe situations. The least common symptom among these children was avoidance and a feeling of numbness.

The pattern of symptoms across categories of posttraumatic stress disorder symptoms was opposite in frequency to those required by the American Psychiatric Association’s criteria for diagnosis. Soysa noted that these observations showed that “Sri Lankan children would have been underdiagnosed if standard measurements of trauma were used.” This pattern of symptoms was replicated in Sri Lankan children after the Asian Tsunami of 2004. This, she said, is just one example of how “the DSM (Diagnostic and Statistical Manual of Mental Disorders) is not as reliable in assessing non-Western populations.”

Soysa then related this research to the responses of U.S. students during the COVID-19 pandemic, noting that, while most students have experienced greater distress during the pandemic, those with more resources shifted less and those with fewer resources shifted more. She also suggested ways professors can adapt their teaching to better support students experiencing distress. Strategies include introducing greater flexibility, simplicity, and predictability in pedagogy and utilizing scaffolding, collaboration, and reminders in courses. She also said she planned to keep using some of these strategies post-pandemic because “it may be better pedagogy.”

Professor Dunn then presented some of her discoveries regarding carbon absorption—or “sink”—in forests. She explained that carbon can be absorbed by the atmosphere, which exacerbates climate change, or by the ocean and plants, which slows the effects of climate change. It is important to study absorption patterns, she said, because “We want to understand if these forests will continue to absorb CO2 in the future.”

During the 1990s, Dunn and a team of researchers studied an old black spruce forest in a remote location in the boreal forest. They found that the forests could act as both a sink and source of carbon, depending on environmental conditions. In 1995–97, for instance, tree growth was outpaced by decomposition of the forest’s peaty soil, which meant the forest released more carbon into the atmosphere than it absorbed.

After joining Worcester State in 2007, Dunn established a research site in Harvard Forest in Petersham, Mass. Every year, she and a group of Worcester State students measure a stand of old-growth red pines and two stands of younger trees, cut in 1990 and 2008. Their findings showed that the younger sites are actively removing carbon, while the old-growth stand is releasing it.

Dunn and WSU students are also examining how human and natural environments interact to affect carbon exchange by conducting atmospheric CO2 measurements in Boston, Worcester, and Harvard Forest. Dunn and two of her students spent a summer visiting 135 sites to take measurements and found, to their surprise, that trees grow faster in areas that recently underwent land cover change.

Dunn closed her presentation by affirming her plans to continue measurements in Harvard Forest and to work with researchers to synthesize boreal forest data. “Each year, the data becomes more valuable,” she said.

The evening ended with Provost Wims presenting awards to Professor Dunn and last year’s winner, Professor Margaret Kerr, Ph.D. Wims said, “We are exceptionally proud of all of our faculty, who bring their scholarly and creative work into each class they teach.” 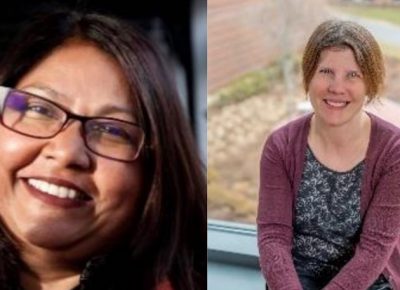