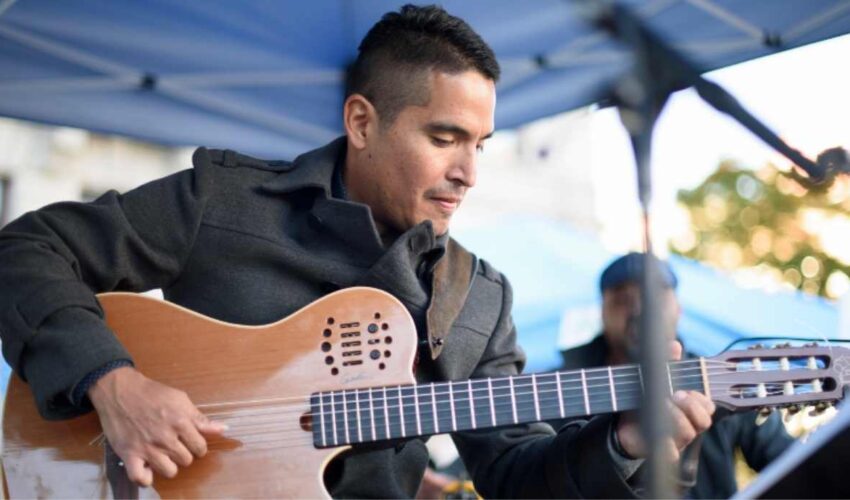 “Music creates this glue between people, this nexus”

Award-winning guitarist and ethnomusicology scholar Carlos Odria has been inspiring Worcester State students as a visiting professor and adjunct for four years. In March, Odria joined the Visual and Performing Arts Department as the department’s newest full-time faculty member.

At the start of the school year, you were the featured performer for Worcester State’s inaugural Unity Walk and rally, a student-driven initiative to celebrate diversity and inclusion. How did that performance feel?

Both aspects made the performance very meaningful for me. First, the concept of the Unity Walk itself, the presence of faculty, employees, and students gathering for the sole cause of fostering this sense of collectivity and connection between all the people who work here, who study here; it was beautiful.

These are things that as an ethnomusicologist I’ve been researching for years, the idea that music creates this glue between people, this nexus. I saw myself as part of that at that very moment. I felt deep responsibility, and I wanted to be very aware of every note that I played in the instrument because I knew that people were really listening to the music. And so, I picked one of my songs. “La Nana,” a song that is cheerful, energetic, fun, with some melancholic moments here and there. It felt great to be listened to at that level where a message was being sent to everyone. I felt really proud of being part of the Unity Walk, the WSU community and being able to communicate my experience, my ideas, at that level through music. 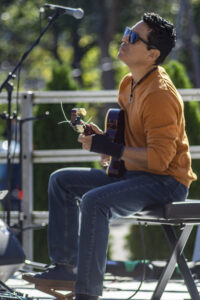 VPA Chair Sam O’Connell described the department as being “beyond lucky to have Carlos as a faculty member, an artist and a performer,” and said that you give the department an “opportunity to build applied music, and in particular, serve as a regional guitar destination for students who want to study and practice.” What are some of the things we can look forward to in your new role at Worcester State?

One of the things that I think is very important for musicians and for people who want to make a living out of playing music is to have the sort of training that prepares you to play gigs at a professional level. What I want to do is to bring my experience in the field – playing gigs and professional engagements connecting to audiences in real situations – which is something that has been a journey for me. Really, no one taught me how to do this. It has been years of finding ways to be able to connect with audiences, to navigate and balance the idea of being an artist and at the same time an entertainer. That’s what I want to bring to the students here at WSU, and demonstrate that if you want to play music, you really need to be flexible and to adapt to different situations and audiences.

You recently partnered with the Office of Multicultural Affairs for its Brotherhood Conference at Worcester State. What stood out from that event?

It was a great event and the success was beyond what we expected. We thought we were going to get mostly students, but we got professionals, teachers from the public school systems, and alumni. So it was an event that I felt was needed and filled a gap in the area. I gave this fun workshop involving drumming on buckets. The main idea was not only to play music, but to show the participants how to work as a team, an essential tool for creating a healthy society, a healthy community, and making good friends. And for me, as a musician, playing in an ensemble is a creative and fun way to demonstrate the importance and effectiveness of teamwork. People were smiling and happy.

You’ve put out two albums with the Carlos Odria Trio and in March, released your first solo guitar album, Montuno Negro, work that you describe as a “fictional, all-too-real character.” Can you tell us more about this character and the inspiration for the album?

At some level, with all music and all art in general – you start from your experiences, from important events in your life. These songs in the album work like that. I tried to imagine this fictional character traversing through different situations in life, different emotions. And I could not disconnect from that fictional character in a way, because he was being fed from my own experiences. But I didn’t want to make the album biographical, to say, “Oh, all this music is about my life,” because there are also some magic elements created when you craft a fictional narrative. And you are able to detach a little bit from your own experiences and it stops being all about you. That’s why I play with that idea in this solo album.

Odria’s album is available on all digital platforms, including Spotify, YouTube, and Amazon Music. To follow Odria’s upcoming performances and music, visit carlosodria.com

This story first appeared in the Summer 2022 issue of Worcester State Magazine. 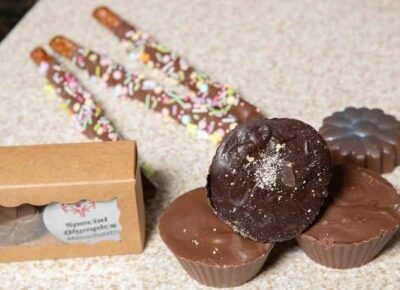 Jean-Luc Wittner, Owner, Suzette Crêperie & Cafe Jean-Luc Wittner can still remember the irresistible aroma of the crêpes his mother used to make for him when he was a child growing up in . . .