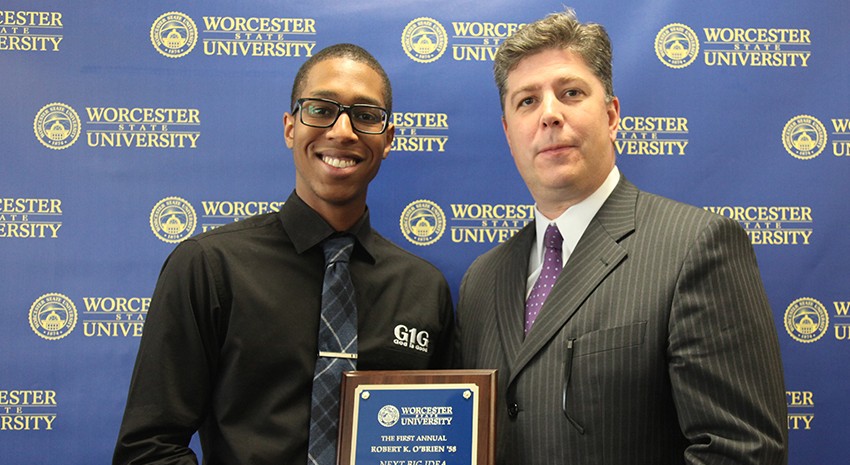 Worcester State University today announced the winners of its first-ever student entrepreneurship competition, the Robert K. O’Brien “Next Big Idea” Contest. Winners received cash prizes at a midday ceremony Wednesday, May 8, with the first place winner, Derek Canton, a WSU business student, receiving a check for $2,000. The inaugural contest attracted seven completed submissions from eight students, with business plans focused on everything from a casual clothing line to an on-line fitness listing service to a nonprofit historical re-enactment program.

Through a generous gift from alumnus Robert K. O’Brien ’58, Worcester State University launched the “Next Big Idea” competition early this semester. O’Brien has a long and distinguished career in business and has helped launch 10 companies employing more than 300 people. “I believe WSU students have the creative innovation to launch the ‘Next Big Idea,’” O’Brien stated. “And I’m excited about the creativity and enthusiasm this first group of competitors demonstrated in this entrepreneurship competition.”

Worcester State President Barry M. Maloney presented the $2,000 cash award and plaque to Canton. “This young man clearly demonstrated that he understood both his new business—a casual clothing line—and the requirements of a successful business plan,” said Maloney. “It is our ambition at Worcester State that our students not only have ideas good enough to succeed in the new creative economy but also the necessary skills to bring those next big ideas successfully to the market place.” In addition to recognizing contest winner Canton, Maloney recognized three other cash winners and three participants who received honorable mention certificates for their submissions.

The full list of winners appears below; the top four prize winners each receive a cash award. Second place earned $1,500; third place, $1,000; and fourth place, $500. Honorable mention recipients were presented with a certificate. A short description of each proposal follows below the contest winners chart.

Kevin Chandler (Business) and Gavin Hazard- Johnson
FitListIt.com, an online hub of fitness information and advice aimed at guiding fitness-minded consumers in the right direction so they can choose the fitness sources for their needs and wants. This service will provide unbiased, user-generated reviews and reliable professional information on key areas of fitness including but not limited to fitness centers and personal trainers.

Adam Straughn (Communication)
The Echo Locator, GPS and Bluetooth technologies combine in a personal device tracking system that allows for close- and long-range location of individually-sold devices that attach to an endless array of personal items. With specifically designed smart-phone applications, users can trace the location of their personal items using long-range GPS monitoring aided visually by Google Maps.

Kristin Morrison (Psychology)
Biffies Cookie Bar, a customized, fresh-baked cookie bar and specialty restaurant that serves a variety of mild and coffee during the day and alcoholic beverages at night.

Michael Baker (History)
History, Inc., a concept for a not-for-profit 501(c)3 organization that will bring the museum experience to the public through the use of the mobile museum concept and traveling costumed interpreters.

Phillip Iaccarino (Economics)
JFM Care Centres, small, personalized group-care homes that would care for elderly in small groups providing individualized care for those not capable of tending to their own activities of daily living. Care would be provided in an environment that is structured on the belief that care for the individual and delivery of personal comfort is more important than the features and amenities offered by many larger assisted-living facilities.

The “Next Big Idea” contest was organized through WSU’s Business Department, and prospective competitors were able to participate in a free, one-credit course, An Entrepreneur’s Approach to Business Development, to assist students interested in submitting a concept for the “Next Big Idea.” The competition was open to students across the full undergraduate curriculum—not just business students—and was advised by four members of the WSU Business Administration and Economics Department: Dr. Renuka Jain (chair of the department); Dr. Joan “Jay” Mahoney (Sam Walton Fellow); Dr. Maureen Stefanini; and Dr. Rodney Oudan.

The competition included a formal submission in writing and an oral presentation of the business plan before a panel of judges, members of the Worcester State University faculty, and other members of the WSU community during the sixth annual Celebration of Scholarship and Creativity. Based on both the written submission and the verbal pitch, the judges determined the winners. Those judges included:

The English Club sponsored a successful trip to the Emily Dickinson Museum on Saturday, May 4, which included 25 members of the Worcester State community. Students and participants took a 90-minute . . .