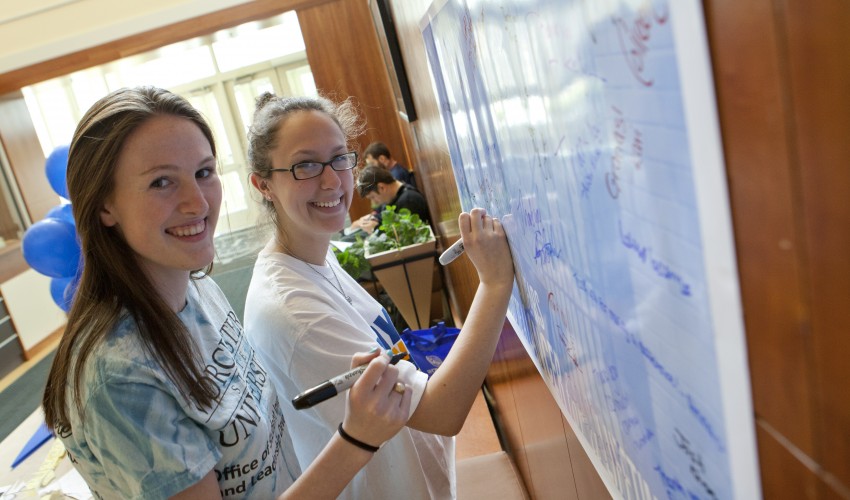 The second annual Day of Giving challenge on Wednesday, April 1, was an extraordinary success, with more than 450 donors giving a more than $150,000, far exceeding the goal of 300 gifts in a single day. Gifts processing is still ongoing, with the final numbers scheduled to be release in mid-April.

The Day of Giving challenge is an innovative 24-hour fundraising challenge that leverages social media to help raise as much money as possible in one day for scholarships, research, the Wellness Center, and other University priorities.

The preliminary totals include a $70,000 matching gift donated by the members of the WSU Board of Trustees, the Alumni Association Advisory Board, and the Worcester State Foundation Board.  Once the initial goal of 300 gifts was reached, alumna Sharon McDonald ’86 stepped up to continue the momentum, offering another challenge that was met: $2,000 if 100 more gifts were raised.

More than 125 alumni and students volunteers were involved in the day. Alumni volunteers worked as social media ambassadors and sent thank you emails. Students signed thank you banners hanging around campus; the Dance Team and Dance Club joined together for their first-ever flash mob dance in the Sheehan Dining Hall; the student senate hosted a Penny Pong game; WSRU talked up the day (in two languages); and seniors contributed to their class gift, which counted toward the day’s totals. Members of CLEWS, WSU Presidential Student Ambassadors and the Commuter Advisory Board staffed the thank you banners, wore sandwich boards advertising the Day of Giving, and sent thank you emails to donors.

“The day’s effort helped to educate students about the important role private support plays in the realm of public higher education,” said Diana Curran, annual giving coordinator. “The Day of Giving challenge was as much about leadership, school spirit, and student-engagement as it was a cutting-edge fundraising effort.  It was truly an amazing day for alumni and students of Worcester State.”

For a roundup of social media posts made during the day, visit the #WSUday15 tagboard site.

An agreement between Springfield Technical Community College (STCC) and Worcester State University (WSU) will provide a pathway for students who complete their associate degree at STCC and transfer . . .