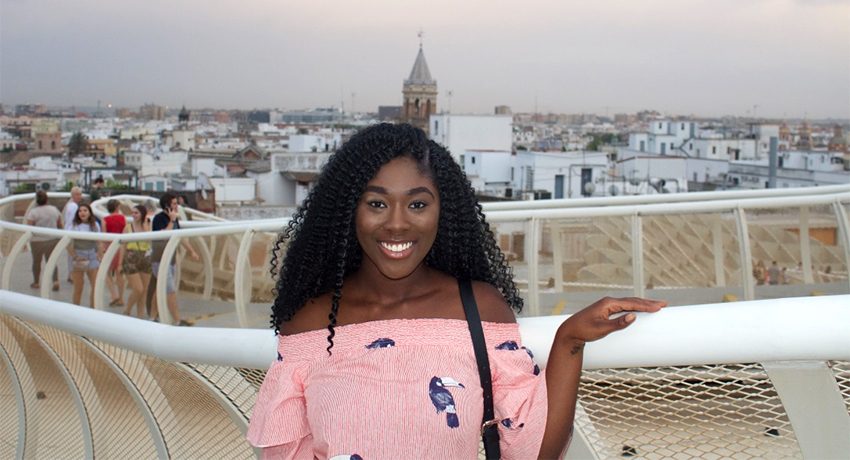 For senior Daniella Owusu, spending a semester studying in Spain wasn’t enough. She’s back there now, and is among a small percentage of Worcester State University students who study more than one semester in different locations around the world.

“When I returned home, I was dealing with reverse culture shock, and I needed to get back to Europe,” Owusu says. As she calculated the potential costs of another semester abroad, she discovered it was an affordable option. Being able to complete elective course requirements for her degree—as opposed to major- or minor-related courses—made the idea even more plausible.

Returning to Europe also would allow her to document her experiences to share with others, something she had planned to do the first time, but found difficult because she “was trying to juggle time living in the moment and enjoying my experience abroad.”

She also honed her Spanish-speaking skills and increased her adaptability. “I’m proud of learning to be a more comfortable [Spanish] speaker,” she says. “Studying abroad has pushed me to do a lot of things on my own, travel alone, make decisions on my own, and being strong in a country that was foreign to me.”

“Another reason Spain was life-changing was due to the intersectionality of being black and being a woman in a European nation,” Owusu adds. “There were some instances of racial and gender discrimination towards black women. Understanding colonialism and stereotypes of black women made me realize that some countries have not progressed as much as America—something I had to deal with every day in Spain.”

Spain is less diverse than other European countries, such as France and England—not to mention the United States, she explains. Its diversity is a far cry from that of Lowell, Mass., where Owusu grew up. “I attended Lowell High School…It’s a melting pot,” she recalls.

Owusu hopes that her willingness to study abroad and share her experiences will encourage other Worcester State students of color to give it a try.

“I knew for a fact that I wanted to blog my experience abroad, especially as a young black woman in Europe. I felt like I had a story to tell,” she says.

In the eight months that passed between Granada and Sevilla, Owusu launched her YouTube channel and continued her blog, both of which include information, testimonials, and tips about studying abroad from a variety of angles.

“Upon returning to WSU [last year], many students and faculty were so excited to hear about my experience racially, educationally, and personally, and students were interested in studying abroad,” she says.

“People of color and underrepresented groups have the lowest percent when it comes to studying abroad,” she said. When she studied in Granada, she was one of three persons of color in her study-abroad group, which was comprised of many students from the United States and a small number from other countries.

At the Universidad de Sevilla Facultad de Filologia this semester, Owusu is taking language and cultural courses and living among the local students. The building in which she spends most of her time was once a tobacco factory that employed women workers who went on to become “the women who fought for women’s rights in contemporary Spain,” she says.

She also is planning to travel around Europe “since European countries can be accessed easily by train or cheaply by air.”

Owusu, a sociology major, hopes to find opportunities in Sevilla to help refugees and immigrants. One of her experiences in Granada was witnessing how “African and Middle Eastern refugees and immigrants suffer financially, economically, and emotionally because they receive little to no help from the Spanish government,” she says. That is motivating her “to pursue a career in immigration advocacy for those marginalized people.”

According to Director of International Programs Katey Palumbo, a small number of WSU students “return from study abroad and then study abroad again.” Owusu is among the few that “has done so in the same country.”

There are other students who have studied in the United States through the National Student Exchange and then studied abroad or studied abroad twice in different foreign countries.

“We also have a number of students who participate in our short-term, faculty-led programs and then go away for a semester—or vice versa,” Palumbo adds. 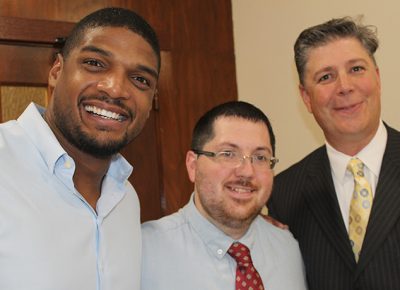 Michael Sam Tells Story of Finding His Identity and Coming Out

It took a great deal of bravery for Michael Sam to come out as gay right before the NFL draft that would determine his future. But, in a talk September 27, part of Worcester State University’s . . .