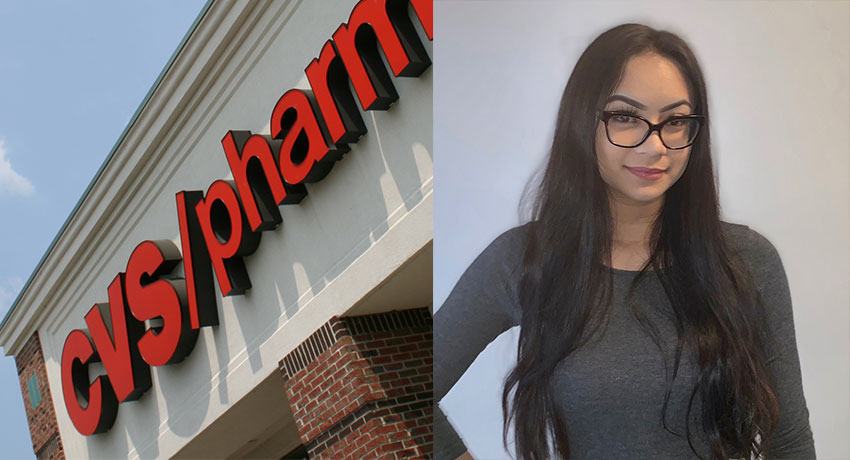 While most of us might feel a little helpless watching the coronavirus pandemic unfold from our living rooms as we follow stay-at-home orders, Juliann Ngo ’22 is making a difference on the front lines. She has been working up to 12 hours a day at a COVID-19 testing site run by CVS Health in the parking lot of its Shrewsbury store, helping to “flatten the curve” of new infections.

The drive-thru site, which will soon be closed as a larger test location opens in Lowell, was the first of several test sites CVS planed to open nationwide, offering tests to first responders and medical personnel, as well as appointments for people experiencing symptoms of COVID-19. Ngo is majoring in public health with a minor in biology and concentration in women’s studies. As a part-time pharmacy technician at the Shrewsbury CVS, Ngo was happy to step forward when volunteers were sought for the testing program.  She hopes to enroll in medical school after graduation, so her work at the test site aligns well with her plans.

It also has opened her eyes to the impact public-health measures can make within the community, she says. “After first responders and healthcare workers are tested, they are able to care for and help others, especially those who are considered more vulnerable populations, without worries that they are spreading the disease to them,” she says.

Ngo is part of a team that assists nurses and other medical professionals who do the actual swabbing to collect test samples. “I’m helping wherever I’m needed,” she says. “It might be assisting one of the nurses, checking to see that the team is wearing PPE safely, collecting patient consent forms, things like that.” She also reassures them about patient confidentiality.

Ngo often is the first person a patient encounters when they pull into the site. She is dressed in full personal protective equipment (PPE), including mask, gloves, gown, and a face shield, which can be a jarring sight. Part of her role is putting them at ease.

“The procedure also can be a little scary to think about, so I always ask them about their concerns and answer any questions they have,” she says. “It’s just talking to them and helping to keep them calm.”

The testing site opened in late March to much fanfare because it was the first commercial test site in the country. On the first day, the staff, including Ngo, were given a number of pep talks from elected government officials, people from FEMA, CVS management, and others.

“They gave a lot of motivational speeches and told us how what we were doing was very important for containing the epidemic and helping the community,” Ngo says. “Getting that kind of recognition was really motivating to us.”

Her main concern, Ngo says, was the possibility of bringing the virus home to her parents and siblings. But they have supported her efforts.

“I can’t thank them enough for their encouragement,” she says. “They understand what I want to do in my life, so they have been really supportive of my decision to do this.”

It was her family that sparked Ngo’s interest in medicine. She is a first-generation American and her parents, who immigrated from Vietnam, do not speak English so Ngo always handled any healthcare issues that came up for them. She would accompany them to doctors’ appointments to translate, describing their symptoms and relaying back to them the doctor’s advice. If they needed a prescription, she would speak with the pharmacist to make sure her parents understood the proper way to take their medications.

“I’d translate for them and ask for their prescription refills for them and keep all their medical records,” she says. “Ever since I was a child, I was just there to help take care of everything, and I guess that’s what made me start to think that, if I can help my parents, I can help other people, too.”

How does she balance her full-time coursework with 12-hour days at the test site four or five days a week? “School is my first priority,” she says. “I make sure my assignments are out of the way before I do anything else, because education is very important to me and what I hope to do someday and I don’t want to let anything else get in the way of that.”

But it’s a gratifying experience when, after her schoolwork is done, she heads out to the test site to do her part in fighting a global pandemic at the local level. “I genuinely love working with people and helping them,” she says. “Just knowing that I can make a difference, no matter how small, is definitely a really great feeling.” 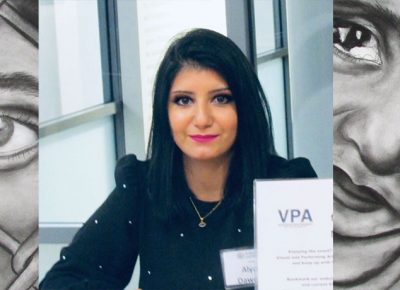 For Alyaa Dawood ’20, a visual and performing arts senior working to complete her student thesis drawings, pencil and paper symbolize even more than the tools necessary to create her artwork. They . . .