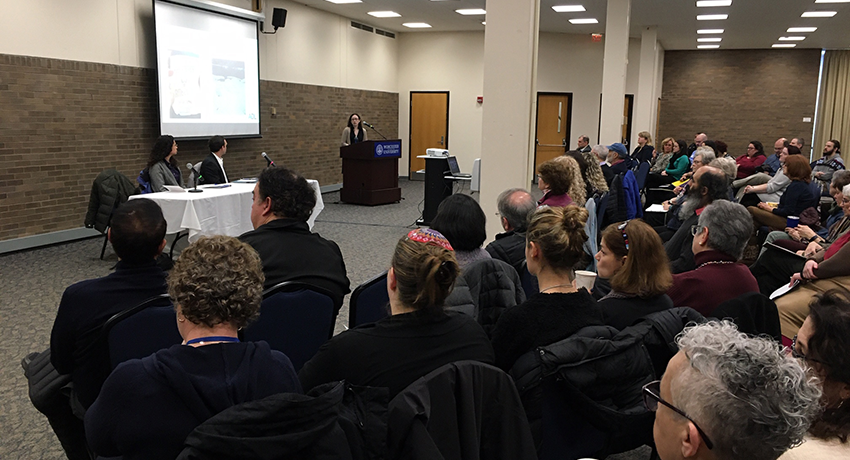 Speakers Encourage Working Together to Combat Hate and Anti-Semitism

One day after the international remembrance day of the Holocaust, campus and community members gathered to learn about the persistent scourge of anti-Semitism and other acts of hate, and what individuals can do to combat these disturbing incidents.

The program on Tuesday, Jan. 28, included representatives from the Anti-Defamation League, the Jewish Federation of Central MA, and Worcester Interfaith. Leaders of the city’s Jewish community were in the audience and contributed to the conversation, in both the general discussion and two small group breakout sessions.

President Barry M. Maloney said the campus adopted a Five Points of Action Toward a More Inclusion Campus Climate in 2016, which resulted in diversity coursework for student, more inclusive hiring of faculty and staff, and the creation of a Bias Incident Response Team, among other initiatives. Despite this focus, he said a discussion about anti-Semitism was necessary due two acts of hate discovered recently on campus.

“We cannot look away,” said Maloney. “And that is why we have asked folks from the community to come here today to be formally part of our program.”

Mellissa Kraus of the Anti-Defamation League (ADL) gave an overview of the “State of Hate in Massachusetts,” noting that 373 Massachusetts hate incidents were reported to the ADL in 2018.

“There’s really no great way to prevent these things, or at least from stopping them altogether, but what’s really important is how schools react and respond to it. I’m happy to be here today as part of that reaction,” said Kraus. “The most important thing to do when something like this happens is to show this is not who we are, this is not what we stand for. Hate has no home here. We can only combat this when we are all fighting together.”

Kraus said 60 percent of bias incidents reported to the FBI in 2017 involve race or ethnicity, with 20 percent motivated by religion. But of the religious category, 60 percent involved anti-Semitism. Additionally, 25 percent of hate incidents occurred at or near residences, “which makes people feel unsafe in the place where people should feel the safest,” she added.

Despite the sobering statistics, speakers and members of the audience had uplifting words for the group.

“We can’t lose hope. The fundamental message of [Holocaust] survivors is never again, never forget. But at the same time, let’s not forget to have hope because we have resources today, we have alliances today, we have wonderful organizations today that are working to combat these things,” said Steven Shimmel of the Jewish Federation of Central MA. “We should be more hopeful than any generation in history. We are well equipped to combat and deal with these things if only we remember to join together in these efforts.”

“I hope we will work together and help each other so that we can maintain stamina, each of us taking the lead in our own spaces and switching off when you get weary,” answered Stacey Luster, assistant vice president of human resources, payroll, and affirmative action and equal opportunity.

Devra Goldstein of the Worcester Interfaith Alliance said building relationships is worth the effort.

“It’s hard and messy and can get discouraging. But our alternative, to isolate ourselves, doesn’t look too good. I think each of us is really worth this struggle,” she said. “I want to suggest we choose each other. Let’s choose solidarity. Let’s share ourselves and get to know each other. . . Our lives are already interconnected. We’re already sharing this planet. Let’s make space for all of us to survive together.” 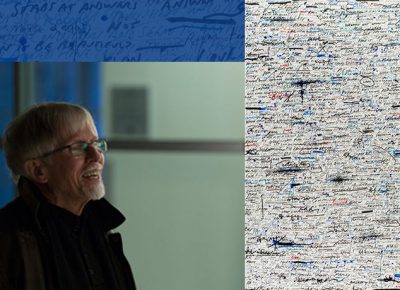 Writing and art, words, and abstraction—these inform Michael Hachey’s solo exhibition at the Mary Cosgrove Dolphin Gallery. The exhibit opens Feb. 6 with a reception from 5 to 7 p.m. with an . . .