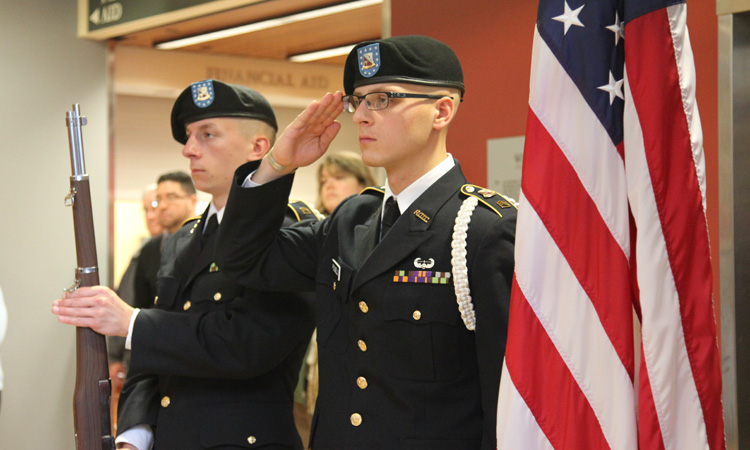 The campus community honored Worcester State University and local veterans at a ceremony on Thursday, November 8. Due to weather, the ceremony was held inside.

Speakers included WSU President Barry Maloney and Director of Veteran Services Alan Jackson.  A traveling display was on hand bearing the names of 153 soldiers from Worcester county who died in Vietnam.

A reception in honor of Blue Star mothers was held following the ceremony.

The ceremony featured a flag that was flown by members of the One-Hundred-Eighty-First Battalion, Army National Guard in Afghanistan. The Worcester-based battalion received the flag from Senator Stephen Brewer and after flying it in Afghanistan, battalion members who were also Worcester State students donated the flag to the university.

“We are extremely honored and grateful to have this flag in our possession,” said Director of Veterans’ Affairs Alan Jackson. “This flag represents the brave men and women who give of themselves in the name of freedom and democracy.”

“What makes Veterans Day so poignant is the knowledge that our military personnel are willing to serve without question,” Maloney said. “We salute them for their service to our country.” 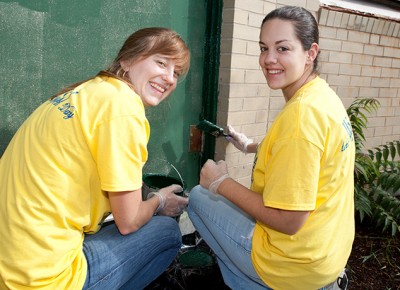 Make a Difference Day: A Lesson in Bulbs and Neighbors

For the second year running, WSU students turned out October 20th to participate in a national day of service called Make a Difference Day. Sponsored by the Center for Service Learning and Civic . . .