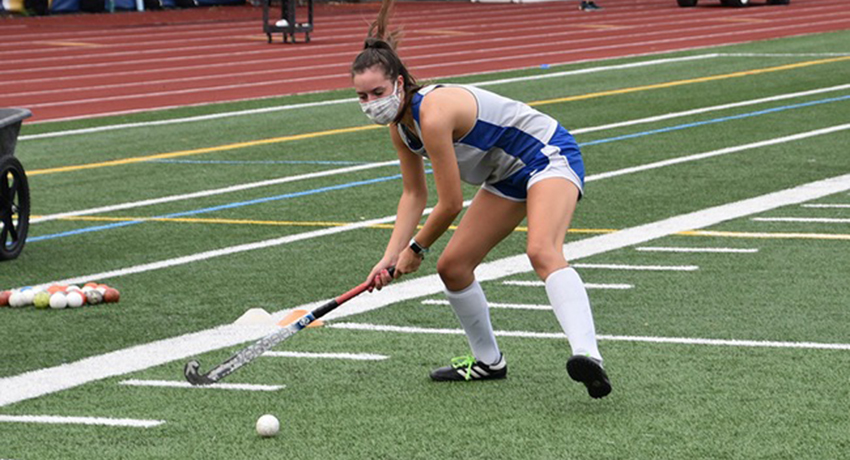 After five long months spent at home during the pandemic, Worcester State University student-athletes made their highly anticipated return to campus on Tuesday, Sept. 1. The student-athletes moved in knowing they would have challenges to face, both accepting this time off of the field and court, as well as adjusting to a campus life where many classes would be held remotely.

Although the learning format is somewhat new, students participated in remote learning back in March, when the pandemic first broke out. Some student-athletes expect the process to be much more seamless this fall.

“There will not be as much trial and error,” says field hockey senior Kaleigh Cole. She also is confident in her ability to better prioritize her time now that she is more familiar with the remote learning setup.

Professors have taken note of students’ experience with remote learning, too. “(They) will be expecting more from their students this semester,” says Tim Drevitch of the men’s hockey team.

Some student-athletes are fortunate to be able to attend classes in person this semester. For example, junior Sam Magee, of the men’s cross country and track & field teams, meets in person for his anatomy and physiology lab once a week. Despite the pandemic, he explains that he feels comfortable going to class with other students and professors.

“I think that Worcester State has done all of the right things to ensure that their campus population can return to some sense of normalcy while de-escalating any possible risks that could arise throughout the pandemic,” he says.

With a new education system that will take time to get used to, student-athletes will need to stay on their toes, just as they do in competition. Part of this is adapting to new protocols in the classroom, such as wearing masks and wiping down the desks. Women’s track & field senior Rachel Jorge is staying especially alert this semester. “We will never know what to expect and what challenges will come,” she says.

As of September, all fall semester competitions have been suspended by MASCAC. In efforts to keep some sense of normalcy, fall sports teams are allowed to practice a few times a week, following specific guidelines set forth by the state and modified by the athletic administration at Worcester State.

Student-athletes across campus are thankful they are able to practice, each for their own unique reasons. “I am glad I can spend my senior year with all my friends on the team and have the ability to step out on the field for one final season,” says Cole.

Additionally, the ability to practice together after months of being apart is extremely important for student-athletes’ well-being, says Magee. “The time we spend together while out on the track, roads, or trails while training is obviously a big part of our team chemistry, so it will be great to revisit all of it regardless of what precautions we need to take.”

As for winter sports, the Athletic Department recently announced that teams will be able to practice in the fall semester, and potentially compete starting in January. This news was followed by a sigh of relief from winter sport athletes who had been waiting anxiously for the verdict on their season. Drevitch says he and the rest of his team are keeping their skills sharp in the meantime by spending some time on the ice together for voluntary captains’ practices. “Our practices start Monday and will be twice a week until the preseason officially gets started.”

Jorge is committed to staying in shape as well to ensure she gets the most out of her senior season once January comes. “The only way to keep our hopes up for winter is to really just focus on our lifts and skills to be prepared both mentally and physically for the season,” she says. Luckily, students are allowed access to the DeFeudis Fitness Center, located in the Wellness Center, giving the opportunity for winter sport athletes to keep up with their conditioning.

Due to the circumstances, many precautions are being taken, which leads to tighter rules on campus. Residents are expected to remain socially distanced from those who live off campus, not gather in large groups, and be tested for COVID-19 weekly. Between these new expectations, and the fact most classes are remote, many students chose to live at home this semester, leaving about half of the usual amount of resident students on campus.

Magee is among the student-athletes who decided to return to campus. “It will allow many of us to be grateful for the resources we have that will always be here, and realize that the campus is still full of life despite the physical presence being a little lower,” she says.

As a student-athlete, Jorge was keeping her teammates in mind when deciding if she wanted to live on campus or not. “Being able to have easy access to the Wellness Center, as well as my teammates, to get lifts in together helped me make my decision to live on campus.”

Most student-athletes are residing with their teammates, not only because it is convenient to have a roommate with a similar schedule, but because teammates end up forming a strong bond. Student-athletes who live off campus still felt it was important to be with their teammates, as a big part of Cole’s decision to get an off-campus apartment was because her teammates who she lived with in the past were doing so.
Worcester State’s main dining hall, located in Sheehan Hall, is operating slightly differently this semester. The usual buffet-style setup has been changed over to pre-made dinners in to-go containers, which allows for quicker turnover in the dining area and the option for students to eat socially distanced in their residence halls.

Trying to balance a busy schedule, Jorge says she prefers the new system in the Sheehan Hall. “I definitely like the new system because it allows you the option to take anything to go when you do not have time to sit down, whereas before you could only take sandwiches to go,” she says.

Certain locations such as the Student Center Food Court have not re-opened yet, but the University made sure to offer food from all of the fan-favorite stations elsewhere. “I’m really happy they are able to keep the sushi station open by moving it to the Lancer’s Loft,” says Magee. The Lancer’s Loft is another dining option for all students, and is now operating through a mobile app, so students can order online and pick up their food when it is ready.

The best thing student-athletes can do during this trying time is to keep a sense of normalcy as best they can. Even after just a few weeks, Cole has already figured out how to maintain the perfect balance between her schoolwork, social life, and part-time job. “I do homework during each school day, hang out with my friends at night, and work over the weekends,” she says.

Magee is trying to keep a similar balance by regularly communicating with his friends, teammates, professors, and coaches. He is keeping his peace of mind by looking forward to next semester, and all the positives that will hopefully come with it. “I hope next semester we’ll be able to accommodate more in-person classes and that I’ll be able to see some of my close friends more often once they are living on campus again,” he says.

For now, student-athletes will continue to be studious, follow the newly set guidelines, and practice and bond with their teammates as much as possible. With high hopes and positive attitudes, Magee and the rest of Worcester State’s student-athletes must continue to take it all one day at a time. “I think the lessons we will learn over the coming months will carry us very, very far as we surpass these times and one day return to competing.”

This story was written by sports information intern and women’s cross country and track & field student-athlete Kyra Siano ’21 and first appeared on www.wsulancers.com.

With sponsorship from Mass Humanities, Worcester State University hosted an online event, "Reading Frederick Douglass Together," a reading and discussion of abolitionist Frederick Douglass's powerful speech, "What to the Slave is the Fourth of July?," on the evening of Sept. 9. The event drew more than 100 participants and featured 18 panelists. The Mass Humanities program aims to bring . . .